There are many myths surrounding sign languages, in particular that there is only one, universal language. Discover more by taking this quiz!

Although fingerspelling is an extremely useful skill which anyone can learn in a couple of hours, it is awkward and unwieldy to use in conversation. True sign language uses a vast range of signs and grammar to communicate, and cannot be learnt fluently in a short period of time. Nevertheless, it is rewarding to study, particularly if you have Deaf friends or acquaintances to converse with.
3. In American Sign Language, fingerspelling requires the use of two hands.

In ASL, fingerspelling requires only one hand. In BSL, letters are formed using both hands (with the exception of 'C'). Both systems have advantages, BSL letters being easier to learn as they are more systematic and many resemble their written counterparts.
4. Sign language can be defined as communication using only the hands.

Sign languages convey meaning through the positioning and expression of various parts of the body, including facial expressions, lip patterns and upper body and head movement.
5. Some in the Deaf community use a sign language as their first language. Some educators believe that it is very important to learn a spoken language. What is this belief called?

In the middle of the 20th century, it was common for deaf and hard-of-hearing children to be taught spoken languages only. Campaigning by some Deaf people has highlighted the value of sign languages, but pressure to integrate deaf children into mainstream schooling can lead to an effectively oralist approach.
6. Sign languages are not 'simple' and can convey complex ideas as effectively as spoken languages.

Sign languages can convey ideas on any subject. Poetry is written in sign languages, and jokes are told all the time! Despite their complexity, they can be easier to learn than spoken languages, as signs often bear a closer resemblance to the ideas they signify than words can.
7. British Sign Language has a sign for every common word in British English, and shares the same grammar.

The grammar of BSL (and also of ASL) are very different to those of spoken English. Word (sign) order is altered, some words such as 'the' are not used, and others such as orange (the fruit) and orange (the colour) have distinct signs. Signed English is a system which applies ASL or BSL signs to the grammar of spoken English.
8. Culturally Deaf people (those who feel a part of Deaf community) would generally love to be able to hear perfectly and communicate using spoken languages.

Hearing-impaired people may not like to call themselves 'deaf', and would often like to recover their hearing, but the term 'Deaf' (with a capital 'D') is applied to people who are proud of their culture and languages. They may well have been deaf since birth and gone to a school for deaf children.

Some people would include groups such as hearing children of deaf parents under the term Deaf.
9. Sign languages would be a useful method of communication for deaf people who also:

Sign languages can and are learnt by people of all ages, including pre-school children. If someone has a physical disability which makes it difficult for them to sign conventionally, it is usually easy for them to adapt the language as necessary. Sign languages can be adapted in many ways and are even be used by deaf-blind people in addition to the deaf-blind manual, a system of letters traced on a hand.
10. Despite the plethora of different sign languages, an international sign language was developed. Like all 'invented' languages, it has proved unpopular. What was its name?

Sign languages are vital, living languages, because like spoken languages they have been developed by their users. As there is little broadcasting in sign languages, regional 'accents' tend to be strong, and an international sign language (though useful) will never gain mass acceptance.
Source: Author riotgrrl 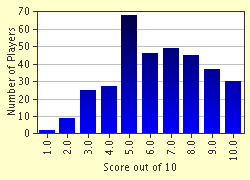 Related Quizzes
This quiz is part of series Signers, Singers and Sinners:

A group of quizzes on some people from history and the world of entertainment.


Other Destinations
Explore Other Quizzes by riotgrrl