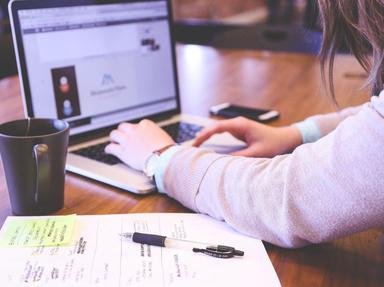 You Want To Call It WHAT? Origins of Brand Names Quiz

Brand names of products surround us daily, but where do some of the more unique names come from? Computers? Dreams? Visions? Peyote button hallucinations? Have fun!

Share on Facebook
Share on Twitter
Share by E-Mail
Author
lompocjoe
Time
5 mins
Type
Multiple Choice
Quiz #
273,016
Updated
Dec 03 21
# Qns
10
Difficulty
Average
Avg Score
7 / 10
Plays
2939
Awards
Top 35% Quiz
This quiz has 2 formats: you can play it as a or as shown below.
Scroll down to the bottom for the answer key.

Quiz Answer Key and Fun Facts
1. 'Zima' is a buzz-producing beer from which all coloring and 'beer'-flavor has been removed. After its introduction in 1992, it immediately became a marketing hit...but where did the name 'Zima' come from?


Answer: It is the Russian word for 'winter'

1992 was one of those weird years in which drink manufacturers messed around with their most popular products, trying to come up with something 'different.' It was known as the 'Year Of The Clear', especially in the highly competitive beer world and the major brewers thought that a clear beer would appeal to whatever age group was popular at the time. Remember "Miller Clear?" Don't worry, no one else does. Only the folks at Coors came up with a clever name for their beer that looked like vodka: Zima.

A rough translation of this Russian word is 'winter' in English.
2. Willy, the Hillbilly was the first 'spokesman' for what caffeine-rich soft drink?

Long referring to the illegal hootch known as 'moonshine', Mountain Dew was the name selected by Barney and Ally Hartman, creators of the lemon-lime drink which was originally intended to be used as a whiskey mixer. When Pepsi-Cola bought the company in 1964, Mountain Dew was peddled as a soft drink and raucous kids shouting "Do The Dew!" replaced old "Willy." Just think of what life might have been like if the Hartmans had used the 'Hee Haw Hippity Hickey Hoppers' name.
3. Texas was the birthplace of this ubiquitous convenience store.

Although the other names are more alliterative, the business of selling basic foodstuffs off of an ice dock in Dallas, TX in 1927 was given a name that reflected its unusual hours of operation (7 a.m. to 11 p.m.). Today, it is an international business with more stores than McDonald's and a number of brand names, such as 'Slurpee', Big Gulp', and 'Citgo Gas', under its control.
4. What popular clothing company took its name from a derogatory term often applied to Central American countries?

Although you might not link 'jungles' and 'bananas' together, Banana Republic founders Mel and Patricia Ziegler thought it a great name for their new (1978) company. During the 1980's, this was THE place for well-dressed 'yuppies' to get their safari jackets, pith helmets, and snakeskin briefcases.

When Gap, Inc. acquired Banana Republic in 1983, the fervor for the Tarzan look was waning, but through clever marketing, Banana Republic emerged as a popular source of everyday casual wear.
5. In olden days, people often referred to their feet as 'dogs'; Grandpa might come in from the North 40 and say "My dogs are barking.". This inspired the name of what popular casual shoe?

A Michigan shoe company was about to introduce a new shoe to the market: lace-up suede shoes with a crepe sole designed for comfort. All that was missing was the name. While people pondered in Michigan, the company's sale manager went down to Tennessee to visit some friends. Of course, they had yappy dogs all over the place, but when they were thrown chunks of mushy looking cornmeal, they became quiet and complacent.

The Michigan man went back home and told the company that he had come up with the perfect name for these kick-back shoes: Hush Puppies, named after that sticky, gooey cornmeal mush.
6. Forrest Mars - son of chocolatier Franklin Mars of "Three Musketeers and "Snickers" fame - interested R. Bruce Murrie (of rival candy maker Hershey) in making what popular candy?

Franklin and his son, Forrest, had a tempestuous relationship, culminating in the younger Mars departing for Europe with the recipes for his dad's popular candy bars. After observing British soldiers returning from the fighting fields of World War Two with small bits of chocolate covered by a hard candy shell, he felt that the U.S. was ready for a 'melt proof' candy.

He and his new partner, Murrie (the adopted son of legendary Milton Hershey) wanted to use the British name for the candies - 'Smarties' but found out that there was already a 'Smarties' candy in the United States. Putting their heads together, they ended up putting the first letter of their last names together.
7. SPAM (the food, not the junk mail) is named for:

SPAM (which is always capitalized) was created by the Hormel Company in 1937. Kenneth Daigneau came up with the clever name. Soviet Premier Nikita Khrushchev gave the mystery meat high praise, crediting SPAM with saving the lives of countless Russian soldiers during the Nazi invasion of WWII. Today, more SPAM is consumed in the state of Hawaii than anywhere else in the nation.
8. Borders Bookstore derived its name from:

The brothers Borders opened a used book store in 1971, but soon developed an inventory control method that permitted them to have quick access to almost any book in print. In 1994, Kmart acquired Borders, but just one year later, Borders was big enough to buy their way out of Kmart's clutches.
9. Every Christmas, Chia Pets rear their furry little heads and fill the airways with their infernal "Chi-chi-chi-chia, chi-chi-chi-chia" jingle. Why are they called "Chia Pets"?


Answer: The seeds of the chia plant sprout into 'hair' when watered

You can thank Joseph Enterprises of San Francisco for discovering that chia plant seeds are virtually rootless and can grow on a variety of clay heads.
10. The common, but fallacious story behind the creation of eBay is that Pierre Omidyar's wife had a large PEZ candy dispenser collection, and that he created eBay in 1995 to help her acquire even more containers. Urban myth? Maybe so, but what was the domain name that Pierre originally wanted to use?

Omidyar created Auction Web in 1995, intending it to be an on-line 'flea market', but soon found out that the name 'auctionweb.com' had already been taken. EchoBay.com, which came from Pierre's Echo Bay Technology Group, was also unavailable, and the closest he could come to it was 'eBay.' The lower-case 'e' was used so that people could pronounce the name properly, and, NO, it is not Pig Latin.
Source: Author lompocjoe