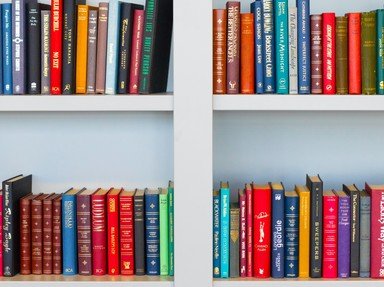 Empedocles thought everything consists of water, fire, earth and air (or wind). What do you know about these book titles referring to something in the air (at least above ground, including birds, flying objects and items of astronomy)?

Quiz Answer Key and Fun Facts
1. Who completed "The Gathering Storm" after the death of Robert Jordan and using his notes?

Robert Jordan (1948-2007) was born as James Oliver Rigney Jr. Jordan gained fame as one of the authors in the fantasy series "Conan the Barbarian", and started his own fantasy series "The Wheel of Time" in 1990. As Jordan was diagnosed with an incurable diseases in 2006, he and his wife sought another author to complete the series based upon Jordan's notes. They finally agreed upon Brandon Sanderson (born 1975), author of the "Mistborn" and "Alcatraz" series.

"The Gathering Storm" is the twelfth instalment in the series "The Wheel of Time". As the final battle between good and evil is approaching, the novel concentrates on Rand al'Thor, the Dragon Reborn, the prime male wizard for the good cause, and his village companion Egwene Al'Vere, the Amyrlin Seat (leader of the witches and also serving the good cause).

Andrzej Sapkowski (born 1948) is best known for his series "The Witcher".
George R. R. Martin (born 1948) gained fame with his series "A Song of Ice and Fire", televised as "Game of Thrones".
Robin Hobb (born Margaret Ogden in 1952) is best known for her series set on the Realm of the Elderlings, containing (among others) the "Farseer" trilogy and the "Liveship Traders" trilogy.
2. Which of the following books by Jack Higgins deals with a plot to kidnap Churchill at the end of the Second World War?


Answer: The Eagle Has Landed

Jack Higgins was one of the author's names used by Henry Patterson (1929-2022). He started his writing career in 1959, specializing in thrillers with an accurate historic background.
In "The Eagle Has Landed" (1975) set in 1943, Higgins described a plot to drop a platoon of condemned parachutists in Norfolk, where Churchill was expected to spend a weekend relaxing. The commandos (wearing uniforms of the Free Polish) would then either kidnap Churchill and abduct him to Germany, or kill him on the spot if anything else failed. But the intruders were exposed when one of them heroically rescued a young local girl...

"Touch the Devil" (1982) dealt with a plot to assassinate the British Foreign Minister.
"Cold Harbour" (1990) involved a plot to free a British spy who was sent to find out about Rommel's defence plans against Operation Overlord.
In "Day of Reckoning" (2000) the theme was a conspiracy to dispose of a mafia leader named Jack Fox.
3. Who wrote the novel "Five Weeks in a Balloon"? It was first published in French.

"Cinq semaines en ballon" (1863) is the original title of this adventure novel. In this novel, Jules Verne described the efforts of Dr. Samuel Ferguson, his servant Joe and his friend Richard Kennedy to fly across the African mainland in a balloon.
Jules Verne (1828-1905) was a prolific French author, best remembered for his adventure novels such as "De la Terre ŕ la Lune" ("From the Earth to the Moon", 1865) and "Le Tour du Monde en quatre-vingt jours" ("Around the World in Eighty Days", 1872).

Pearl S Buck (1892-1973) was an American author of Chinese descent. Her novel "East Wind West Wind" (1930) would fit the theme of this quiz.
Douglas Adams (1952-2001) became famous with his five-part trilogy "The Hitchhiker's Guide to the Galaxy" (1979-1992), which also would perfectly fit in this quiz.
Stephen King (born 1947) was a prolific American author. His book "The Dark Tower: The Wind Through the Keyhole" (2012) would also have its place in this quiz.
4. "Once upon a midnight dreary, while I pondered weak and weary"... Oh no! There's that bird again! But which bird is featured in this poem?

"The Raven" is the oft cited poem by Edgar Allan Poe (1809-1849). I'm quite sure American children have to read and analyse this beautiful poem, of which I cited only the first line.
While "studying" late at night, the narrator was woken by a tapping noise:
"While I nodded, nearly napping, suddenly there came a tapping, //As of someone gently rapping, rapping at my chamber door."
A few verses on he found out what was the reason for this interruption:
"In there stepped a stately Raven of the saintly days of yore".
And then came the repeated response of the bird to every question by the narrator:
"Quoth the Raven: 'Nevermore'."

Lesley Livingston (born 1982) wrote "Starling" as the first instalment of a fantasy trilogy.
"To Kill a Mockingbird" (1960) was the great success of the American author Harper Lee (1926-2016)
Richard Bach (born 1936) gained fame with his novel "Jonathan Livingston Seagull" (1970).
5. Which story by Daphne du Maurier was perhaps a reference to the fear of the English people during the Battle of Britain? Remember the quiz title.

Daphne du Maurier (1907-1989) was an English author, whose stories mostly develop in and around Cornwall.
"The Birds" was published in 1952, together with some other short stories. The time frame was not specified. In this short story by Du Maurier, the main characters were the farmhand Nat Hocken and his employer Mr. Trigg. When some birds for no apparent reason attacked Nat Hocken and other people, Mr. Trigg promised to shoot down the birds just for fun. But in subsequent attacks, Nat Hocken was only slightly wounded, while Mr. Trigg and his family were killed by different species of birds. Soon after the attack in which Mr. Trigg was killed, the bird attacks stopped without a clear explanation.
Alfred Hitchcock was inspired by this short story, but transferred the action to California where he worked at that time. The movie "The Birds" (1963) is still a very enjoyable movie, with a public rating on the Rotten Tomatoes website of 83% and a score by the critics of 94%.

"Rebecca" (published 1938) served as basis for the eponymous Hitchcock movie from 1940.
"Jamaica Inn" (published 1936) also inspired Hitchcock, but this movie (1939) was apparently a failure.
"Frenchman's Creek" was published in 1941 and inspired a 1944 movie directed by Mitchell Leisen.
6. Colleen McCullough wrote the romance "The Thorn Birds" (1977). In which country does the major part of the story take place?

McCullough (1937-2015) was an Australian author, and most of her stories take place in her homeland Australia.
Her best known work is probably "The Thorn Birds" - the story of Meghann Cleary, born in New-Zealand in 1911, who moved with her parents to Australia in 1921. There she met Ralph de Bricassart, a young and ambitious priest. The inevitable happened: Meghann and Ralph fell in love and had a child...

McCullough also wrote a series of seven books about the last century of the Roman Republic. Part 7 of this series "Masters of Rome" is titled "Anthony and Cleopatra" and was set mostly in Egypt.
"The Song of Troy" by McCullough is a retelling of the Trojan War, as it happened once on the Turkish shores.
In the mystery series "Carmine Delmonico" to which McCullough contributed with five titles, all stories were set in the American village of Holloman, Connecticut.
7. "Storm Warning" is the title of many books. Which of the following authors did *NOT* publish a book with this title?

Shakespeare (1564-1616) left us at least 39 theatre plays, including the comedy "The Tempest". Shakespeare's best known works include tragedies such as "Romeo and Juliet" and "Hamlet", comedies as "Love's Labour Lost" and "A Midsummer Night's Dream" and historic dramas as "Richard III", besides more than hundred sonnets. However, none of his other works is titled "Storm Warning".

Jack Higgins (1929-2022) wrote a thriller "Storm Warning" (1976) about a German merchant ship crossing the Atlantic during the Second World War. When a storm threatens to sink the ship near the Hebrides islands, both German naval officers and Scottish citizens set out to rescue the passengers and crew.

Nora Roberts (born 1950) included a mystery novel "Storm Warning" (1984) in her extensive bibliography.
8. Not all thrillers have to be fictionalized. Who wrote "On Wings of Eagles", a thriller version of a real life incident in Tehran?

Ken Follett (born 1949) is best known for his historic novels such as the "Kingsbridge" series and the "Century" trilogy. But he also published many stand-alone thrillers, and two non-fiction novels: "On Wings of Eagles" and "The Heist of the Century".
"On Wings of Eagles" started with two American employees of a multinational electronics firm, being (falsely) accused of bribery and imprisoned in Tehran in December 1978. The CEO of the company started all legal means to get his employees out, but also prepared an undercover paramilitary rescue operation that would start "if anything else fails". And because of the political instability in Iran in the first months of 1979, it had to come to the rescue operation...

Grisham (born 1955) is a mystery author, specializing in legal thrillers.
Ann Cleeves (born 1954) wrote mystery novels featuring multiple detectives (Inspector Ramsay, Chief inspector Vera Stanhope) and two tetralogies set on the Shetland Islands.
Baldacci (born 1960) is best known for his novel "Absolute Power", about an American President ordering the Secret Service to cover up a murder.
9. "The Temple of the Winds" was an instalment of a fantasy series created by Terry Goodkind. What is the title of the whole series?


Answer: The Sword of Truth

In "The Temple of the Winds", Richard Cypher the magician and Kahlan Amnell the Mother Confessor were in love. But when Emperor Jagang used a Sister of the Dark to spread a deadly plague, the only cure could be found in the Temple of the Wind. Alas, a prophecy told the protagonists that Richard was forbidden to enter the Temple unless Kahlan would marry Richard's half-brother Drefan and consume the marriage immediately...
"The Temple of the Winds" was a fourth instalment in "The Sword of Truth", a seventeen volume series starring Richard Cypher and Kahlan Amnell. Terry Goodkind (1948-2020) added also four novels in "The Nicci Chronicles", Nicci being one of the other characters in "The Sword of Truth". Goodkind then followed up with a true sequel cycle, "The Children of D'Hara" (six volumes).

"The Dark Tower" was a series of one short story and eight novels by Stephen King (born 1947).
"Discworld" was a series of over 40 instalments written by Terry Pratchett (1948-2015).
"Riftwar Cycle" is the name given to the 30 novels by Raymond Feist (born 1945), grouped in several trilogies and tetralogies.
10. Who was the detective (and temporarily also one of the suspects) in the mystery novel "Death in the Clouds" (1935, US title "Death in the Air")?

The mystery novel "Death in the Clouds" was written by Agatha Christie (1890-1976) and starred her favourite detective Hercule Poirot. Poirot was one of twelve passengers on a flight from Paris to London, and during this flight a Parisian loan shark named Giselle was murdered. The murderer had to be on the plane, but who did it? And how? And why?

Sherlock Holmes was the master brain created by Sir Arthur Conan Doyle (1859-1930).
Adam Dalgliesh was the inspector in the novels by P.D. James (1920-2014), who wrote mostly about murders in hospitals.
Inspector Morse (his first name is only revealed in the last novel) was the protagonist in the books written by Colin Dexter (1930-2017).
Source: Author JanIQ

Related Quizzes
1. Have You "Red" This Book? Very Easy
2. You Expect Me to Buy This? Average
3. A Book Title Creature Feature Average
4. You Better Shop Around Average
5. A Clowder of Literary Cats Easier
6. Cook Up a Story Average
7. Anita and Me Very Easy
8. What On Earth is Empedocles Reading? Very Easy
9. There Was a Time Average
10. Reading under a Bridge Easier
11. One Word Book Titles (A-O) Easier
12. "The Amber Spyglass" and Other Books with Colors Easier

Go to Literature: Something in Common Quizzes

More In the Title Quizzes