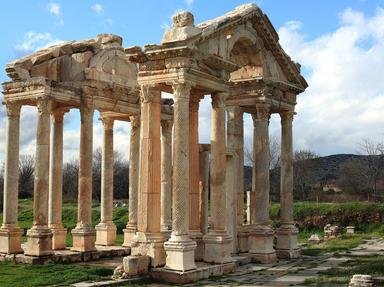 Ph Is For Phaethon Trivia Quiz

In my series on Greek myth based on the (Greek) starting letter, I've now arrived at the letter phi - pronounced as F. Match these mythical characters to their description.

There are in fact several mythical characters named Phoebe, but the one I asked for was a Titaness, grandmother to Apollo and Artemis, and goddess of the bright intellect. (Her intervention could certainly help you out with many quizzes on this site.) She gave her grandson the shrine of the most important oracle, at Delphi.

The "gold-crowned" Phoebe made love to her brother, the Titan Koios. From their union arose Leto, who later would give birth to Artemis and Apollo. Phoebe translates to "radiant", and this combined to her epithet "gold-crowned" convinces me she should have long blonde hair.

But of course no ancient Greek paintings of her were conserved, and later painters have given her various hair colours - from white to dark blue.
2. God of the fiery river surrounding the underworld

The Hades (underworld) was surrounded by five rivers: the Styx (the river of hate), the Lethe (river of forgetfulness), the Phlegethon, the Kokytos (river of lament) and the Acheron (river of woe). Each of these rivers was represented by an eponymous minor deity. The nymph Styx was in love with the male deity representing the river Phlegethon.
"Phlegethon" translates to flaming. The river and the god are sometimes also called "Pyriphlegethon", which translates to the flaming fire.
The early Renaissance author Dante took the myth even further: he identified the Phlegethon as a stream of blood, in which the souls of the deceased were boiled.
3. Daughter of Minos and Pasiphae

Phaedra was a princess of Crete, daughter to king Minos and queen Pasiphae. She married Theseus after he abandoned his fiancée Ariadne (Phaedra's sister) on the island of Naxos, and gave birth to two sons. But the tragedy happened that was described in a few theatre plays (that alas have been lost): Phaedra fell for the charms of her stepson Hippolytus. Hippolytus refused to sleep with Phaedra, and she then accused him of trying to rape her. (A similar storyline can be found in the Bible, with Joseph wrongfully accused by Potiphar's wife.) Theseus than cursed Hippolytus and the gods intervened to kill him.

Pheme is better known by her Roman name, Fama. Both names translate roughly to fame or rumour. Homer called this minor goddess Ossa. Pheme was known to find out everyone's secrets and then spread them, drawing attention with her great trumpet. She may have worked as a messenger for Zeus, but she's better known for divulging secrets of her own accord. Hesiod warned not to anger Pheme: "For Pheme (Rumour) is an evil thing, by nature, she's a light weight to lift up, oh very easy, but heavy to carry, and hard to put down again." (fragment of "Works and Days" as cited on www.theoi.com/daimon/pheme.html).
5. Not born but hatched from an egg

Phanes is one of the lesser known deities from Greek (or even pre-Greek) myth. A world-egg was laid, and out of it came a deity (usually depicted as a young boy with a snake coiled all around him). This deity combined elements of Khronos (Time) and Ananke (Necessity), and he had a relation with Nyx (Night): where Nyx created darkness, Phanes created light. Phanes would also have "invented" sexual procreation, and thus is identified with the Roman god of fertility Priapus. (Don't search for images of Priapus if you're still a minor.) In a most peculiar story, Phanes was killed by the Titans, then boiled and roasted, but Zeus could take away Phanes' heart and remake the deity, although his limbs were already eaten.
6. God of panic

Phobos (panic or fear) and Deimos (terror) were the sons of the major gods Ares (war) and Aphrodite (love). They both accompanied Ares on the battlefield, and on the one occasion where Ares was wounded by the mortal Heracles, Phobos and Deimos rescued their father by bringing the chariot to take him away.
Descriptions of Phobos vary a lot: from a young boy through a teen adolescent to some monster with a lion's head. According to Hesiod, Phobos would have a mouth full of sharp teeth.
7. King of the Lapiths

Phlegyas was the son of Ares and the mortal princess Chryse. He was closely related to Ixion, the better known king of the Lapiths: Phlegyas was either Ixion's brother or his father. Phlegyas is best known for his feud with Apollo. Phlegyas' daughter Coronis fell in love with Apollo, but then she conceived a child by Asclepios (Apollo's son, to add injury to insult) and meanwhile also fell for the charms of Ischys. Apollo was enraged by Coronis' double adultery and had her killed by his sister Artemis.

Then Phlegyas took revenge by destroying Apollo's most sacred temple at Delphi. Apollo killed Phlegyas and had him condemned to eternal punishment in the underworld.
8. Son of Helios

Most sources agree that Phaethon was born to Helios (the Sun) and the Oceanid Clymene, but other assertions have been made. When Phaethon was a teenager, he asked Helios the privilege to drive the Sun chariot once across the expanse. Helios saw many dangers, but eventually granted Phaethon his wish. And then the tragedy occurred as foreseen by Helios: Phaethon could not master the horses pulling the chariot. Sometimes he would drive too far from the earth, causing it to freeze over, and in other places he drove too close to the earth, thus burning the soil. Finally Zeus intervened, and he killed Phaethon with one of his favourite lightning bolts.
9. Prophet and king of Salmydessus in Thracia

There are many sources on Phineus, and most are contradictory. His father was either Poseidon or Poseidon's son Agenor, or even Phoenix. Most sources don't mention Phineus' mother, which may have been Cassiopeia. Phineus was married twice, and had at least two sons (probably also two daughters). Phineus was blinded for some offense to the gods, and the Harpies tormented him by stealing his food.

When two of the Argonauts, the Boreads, chased the Harpies until Iris promised to lift the curse, Phineus explained to the Boreads how to navigate the Symplegades (clashing rocks in the Bosporus).
10. Bird reborn from its ashes

The phoenix got its name in Greek myth, but similar birds exist in many older mythologies. Different sources describe the phoenix as a bird very similar to an eagle, but with red and golden plumage. The phoenix could reach a very advanced age, but when it grew too old it spontaneously burst out in flames, and from the ashes a new phoenix would arise.
Source: Author JanIQ

Related Quizzes
1. And Our Dreams Begin Average
2. Healer Gods and Soothsayers Easier
3. D is For Daedalus Easier
4. Where'd That Moon Name Come From? Easier
5. Epsilon is for Eos Easier
6. M Is For Menelaus Easier
7. Curious Classical Characters Easier
8. P Is for Poseidon - Not for Phobos nor Psyche Easier
9. The Stories Behind the Stars Average
10. Lambda is for Ladon Average
11. Gigantic Deities Easier
12. Unusual Birth in the Greek Myth Average

More Something in Common Quizzes