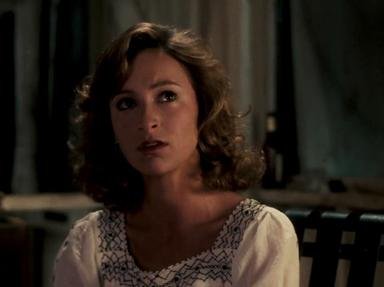 "Dirty Dancing": "Nobody Puts Baby in a Corner" Quiz

"Nobody puts Baby in a corner" is undoubtedly the most quoted phrase from "Dirty Dancing" (1987), but if you were as "Crazy for Swayze" as I was back in the day, I bet you can identify these other quotes from the movie!

Quiz Answer Key and Fun Facts
1. "I carried a watermelon."

It was early in the Houseman family's stay at the Kellermann resort, and, feeling a bit restless, Baby was looking for something to do. While roaming about the place, she heard Max Kellermann ask the waiters to romance the patrons' daughters and saw Johnny Castle for the first time.

But Baby found her niche when she stumbled upon a staff party in a restricted area. As luck would have it, she bumped into staff member Billy Kostecki, who was having trouble trying to manage the watermelons he was taking to the party. He gave Baby one to carry, and invited her to come with him. That was when she saw the staff dancing as she had never seen people dancing before. When Billy's cousin, Johnny, asked what Baby was doing there, Billy said, "She's with me", and Baby added, "I carried a watermelon". She was mortified by her response, but she did get to dance with Johnny that night.
2. "Now, you'll hurt me if you don't trust me. All right?"

Baby and Johnny were in a bit of a pickle. With Penny unable to dance, Johnny was in danger of losing his gig at another resort, which, of course, jeopardized his income for the summer. Johnny jokingly asked Baby if she would like to take Penny's place. That meant that Baby and Johnny would have to spend a lot of time together practicing. Baby was a good student, but became worried that she would not learn everything in time - especially the lift. It just seemed too scary; she was afraid that she might somehow hurt Johnny.

Johnny tried to help Baby overcome her fright by taking her to a lake to practice lifts, and told her, "Now, you'll hurt me if you don't trust me". While it looked like Baby might be able to pull off the dance move, it didn't happen until the finale at Kellermann's last dance of the season.
3. "When I'm wrong, I say I'm wrong."

Dr. Houseman was understandably angry that Baby had violated his trust and used his money to buy Penny's abortion. Penny was terribly ill and he nursed her back to health. But he made a wrong assumption. Johnny and Penny were so compatible on the dance floor that many people believed they were a couple. Dr. Houseman believed Johnny was the one who got Penny into trouble, and even worse, abandoned her when she needed help; consequently, he forbade Baby to have anything more to do with Johnny.

In the end, though, it all came out in the open. Dr. Houseman took back Robbie's letter of recommendation and apologized to Johnny for the way he had treated him. This also helped him mend fences with Baby, because apparently the two had never argued very much.
4. "Where's my beige iridescent lipstick?"

Lisa, Baby's older sister, was so clueless throughout the movie that one's first thought is to lock her in the closet. It is clear from the start, however, that nothing much is expected of her. Baby was going to save the world and Lisa was going to decorate it. She appeared to be an innocent as she sat at the dressing table looking for her lipstick, but she was also shallow. And - she chose to get involved with the creep Robbie, who used her to try and get a recommendation to medical school from her dad.

What Lisa didn't know, or even notice, was that Baby had been using the beige iridescent lipstick since she started dancing with Johnny. After Baby's involvement in the lives of the staff workers became apparent, which caused some conflict in the Houseman family, Lisa did finally show her sister some warmth and understanding.
5. "You'd think they were a couple, wouldn't ya?"

Billy Kostecki was Johnny's cousin, and Johnny had helped him to secure a job at the resort. He didn't have a lot of lines in the movie, but he was important because he introduced Baby to the dirty dancing, and, therefore to Johnny, and he made sure that Baby knew that Johnny and Penny were only friends.

Johnny and Penny were almost always seen together dancing, so it did appear that there was more to their relationship. According to Billy, however, they had known each other for a very long time and they were friends who worked together.
6. "Well, it looks like I picked the wrong sister."

Robbie was definitely the villain in the movie, an arrogant medical-school hopeful who didn't care very much about anyone but himself. He refused to take responsibility for Penny's pregnancy - implying that she had probably been with every man at the resort - and made the above comment to Baby after seeing her and Johnny embrace, adding, "That's OK, Baby, I went slummin' too."

It was a turning point in the movie because Johnny and Baby's relationship was no longer a secret. Johnny got fired, and Baby was in deep trouble with her father.
7. "God wouldn't have given you maracas if He didn't want you to shake 'em!"

Penny was Johnny's friend and dance partner. Although she had a secondary role in the movie, her botched abortion was the reason for Johnny and Baby to begin dancing together, which, of course, was the whole point of the plot.

Along with dancing for the guests' entertainment, she had other responsibilities at Kellermann's. She was to dance with the guests to keep them happy, and she also taught dance classes in the mornings and afternoons. This comment was made at one of the dance classes.
8. "I want you girls to know if it were not for this man, I'd be standin' here dead."

Max Kellermann was the owner of the resort that Baby's family was visiting. In the movie's opening scenes, it was very obvious that Max and Dr. Houseman were not only friends, but also had a doctor/patient relationship.

Max was pleased to welcome the Houseman family to his resort, and Mrs. Houseman made it clear that it had been some time since the family had been able to take a vacation. While he seemed likeable enough, he ran a tight ship, firing Johnny when everything came out in the open about what had happened with Penny and Baby.
9. "But last week, I took a girl from Jamie, the lifeguard."

Neil was Max's grandson, and an insufferable snob. Although it seemed at first like he and Baby might be a good fit together, Baby was much too concerned about making the world a better place than emulating Neil's attitude toward the workers at the resort. Especially since Neil backed up his statement by saying, "And he said to her, right in front of me, 'What does he have that I don't have?' And she said, 'Two hotels'".

While the movie touched a bit on classism, it was not an overwhelming theme, as its purpose was to entertain rather than instruct. It was, however, apparent that Johnny had been misjudged by many, as he said, "The reason people treat me like nothin' is because I'm nothin', as well as some of the others.
10. "I think she gets this from me."

I love this quote! Poor Mrs. Houseman really hadn't been featured much in the movie. She was obviously there to show what a typical upper class nuclear family of the 1960s looked like. She helped Lisa worry about the shoes she didn't bring along and admonished her family for wasting food at meals.

Finally Mrs. Houseman had a clever line at the end of the movie! Baby and Johnny were dancing the last dance when she said this to her husband about Baby's ability.
Source: Author ponycargirl