This is for any fans or watchers of Eurovision. Have you lot been paying attention with Eurovision 2012? Take the quiz and find out!

Quiz Answer Key and Fun Facts
1. Where was the Eurovision Song Contest 2012 held?

Baku Crystal Hall was built for the Eurovision Concert and on the outside, it digitally displays the colours of the flag of a particular country. For example: United Kingdom is performing, then they will show blue, red and white for the colours of the Union Flag.
3. What was the motto of Eurovision 2012?

Forty-two countries throughout Europe entered the Eurovision Song Contest 2012 and only twenty-six of those countries made it to the finals.
5. How many hosts were there during the contest?

There were three, two female and a male.
Their names are Leyla Aliyeva, Eldar Gasimov and Nargiz Birk-Petersen.
6. Did any countries finish with zero points during the final voting?

The lowest score of the final vote was seven (Norway's score).
7. Not a single country sang in their native tongue.

Though the majority of the countries sang in English, many of the other entries sang in their native tongue.
8. Which two countries withdrew from the Eurovision Song Contest 2012?

Armenia and Poland withdrew in 2012 but Montenegro returned after not taking part in the competition since 2009.
9. Which country claimed victory in the 2012 Eurovision Song Contest?

Sweden won this contest, followed by Russia in second place, Serbia in third, Azerbaijan in fourth and Albania in fifth.
10. What was the name of the winning song?

This quiz was reviewed by FunTrivia editor agony before going online.
Any errors found in FunTrivia content are routinely corrected through our feedback system.
Most Recent Scores
Dec 29 2022 : DeepHistory: 10/10
Dec 19 2022 : Guest 93: 7/10 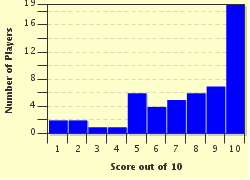 
Other Destinations
Explore Other Quizzes by doubleox515