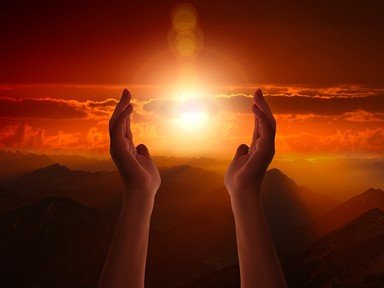 Based on just a few words relating to specific faiths, can you correctly match the religions to the clues?
This is a renovated/adopted version of an old quiz by author ravenskye

This is a Christian concept where God is perceived as consisting of three entities - God the Father, God the Son and God the Holy Ghost. Although the concept is not explicit in the New Testament of the Bible, there are several references to it, including the Great Commission of Jesus, described in the Gospel of Matthew 28: 16-20.

His followers are instructed to make disciples of all nations in the names of the Father, Son and Holy Spirit.
2. Shirt (Sadre) and Girdle (Kusti)

Zoroastrianism was founded by the Persian prophet Zoroaster and is among the earliest established faiths. It is based on the concepts of good and evil, which have similarities with both Judaism and Christianity.

The sadre, also spelled as sedreh and sudra, is a type of undershirt worn as a protection against evil while the kusti (other spellings exist) is a sacred girdle. Both form part of the ritual dress of the Zoroastrians and should be worn every day.
3. Mirror, Sword and Jewel

The mirror is called Yata-no-Kagami and is kept at Shinto's holiest site, the Ise Grand Shrine. The Atsuta Shrine is the home of Kusanagi-no-Tsurugi, the sword, while the jewel, Yasakani-no-Magatama, is kept at the Imperial Palace. According to experts, not even the emperor is allowed to see the items, which are kept in their original wooden cases. Only the jewel, in its box, is present during the installation of a new emperor. .
4. Four Noble Truths

The four noble truths are the first teachings of the Buddha and are described as both real and non-changing. The truths exist at all times, but are only manifested to mankind via a Buddha - known as the enlightened one.

The truths consist of dukkha, the pain and suffering all humans go through; samudaya, the cause of the suffering; nirodha, when the pain ceases and the eightfold path, the way in which humans need to live to achieve nirvana, which is the final release from human misery.
5. Tanakh and Shabbat

Tanakh is the name given to the Hebrew Bible, known as the Old Testament in Christianity, with some differences in the order of the books included. The Tanakh is divided into the Torah, the first five books which cover laws, the Nevi'im, which includes the prophets and some of the historical books, and the Ketuvim, known as the Writings, bringing together most of the other books.

The Shabbat is also known as the Sabbath and is the holy day of rest, observed by Jews from sunset on Friday until the evening of Saturday. It reflects the wording of Genesis - referring to God resting on the seventh day of creation.
6. Livity and Jah

Also known as Rastafarianism, this is a relatively new religion dating from the 1930s and particularly associated with the Caribbean. The name derives from the original name of the Ethiopian Emperor Haile Selassie.

Rastas refer to God as Jah, a form of the Biblical names Jehovah and Yahweh. Livity refers to the life force, or spirit of Jah, which exists in every living creature. Followers of this way of life look to expand their Livity through meditation, diet and in the way they interact with other people.
7. Five Ks

The 5 Ks were created by Guru Gobind Singh in 1699 and are symbols of the Khalsa, the Sikhs who have been initiated into the community. The symbols draw Sikhs together, and members are known by the name of Singh, meaning lion, if they are male or Kaur (princess) if they are female.

Each of the Ks has its own symbolism. They include kesh, for uncut hair, usually hidden by a turban in men. The kara is a steel bracelet which links the wearer to the Guru, while the kanga is a wooden comb with which to keep the hair clean and tidy. Kachha refers to underwear and symbolises chastity while the kirpan is a ceremonial dagger or sword.
8. Vedas and Moksha

The Vedas are the religious texts of Hinduism, which are written in Sanskrit and date from at least 1200 BCE. There are four Vedas, the Rigveda (the oldest), the Yajurveda, the Samaveda and the Atharvaveda.

In common with other Indian belief systems, samsara is a central philosophy of Hinduism and refers to the human soul being lost in an aimless existence. Moksha refers to the final stage of release from samsara, when the soul is freed from the cycle of death and rebirth. The term is used in other Eastern religions as well as in Hinduism.
9. Xenu and Auditing

Detailed information about Xenu is restricted to members of the Church of Scientology who have undergone intensive training, but the gist of what is known is that he was an extra-terrestrial being who came to earth many millions of years ago.

Auditing is the system by which followers of Scientology are able to enhance their own spirituality while divesting themselves of those parts of their existence which are holding them back.

Scientology is a far more recent set of beliefs than others in the quiz, dating from 1953 and founded by L Ron Hubbard.
10. Five Pillars

The Five Pillars of Islam are the principles by which Muslims live. Sunni Muslims follow the five Pillars while Shi'a Muslims include five more duties to make the Ten Obligatory Acts.

The Pillars are Shahada, a declaration of faith repeated during each day, Salah is prayer, with a requirement that followers pray five times a day, and Zakat, charitable almsgiving. The final two are Sawm, which refers to fasting during the daytime hours of Ramadan, and Hajj, the pilgrimage to Mecca.
Source: Author rossian

Related Quizzes
This quiz is part of series On My Knees:

Religion is not my usual area, but I have ventured there a few times, so here are the results.