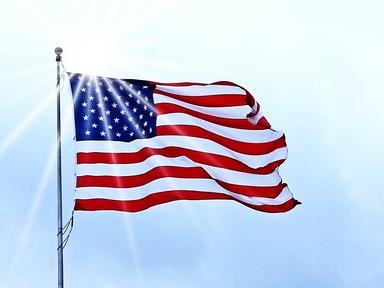 Plenty of US states have official birds or mammals. Here's a look at some of the more unusual species that states have chosen to designate as "official".

Quiz Answer Key and Fun Facts
1. What state has the Eastern Hellbender as its state amphibian?

Pennsylvania has chosen the Hellbender (Cryptobranchus alleganiensis), a type of salamander, as its state amphibian. It is the largest salamander in North America. It is centered in the eastern United States, especially along the Appalachian Mountains, between New York state and northern Georgia.

New York has the Wood Frog (Lithobates sylvaticus). New Hampshire is the Red Spotted Newt (Notophthalmus viridescens) and Georgia is the American green tree frog (Hyla cinerea)
2. What is the most common type of frog states have chosen as their state amphibian?

A total of four states have chosen Rana catesbeiana, commonly known as the Bullfrog as their state amphibian: Iowa, Missouri, Ohio (technically state frog) and Oklahoma.

The American Bullfrog is native to the eastern United States, where it can be found in swamps and other water filled areas. Bullfrogs got their name from their loud bellowing cry. They are a popular food source, especially in the southern United States. There have been experiments to raise bull frogs in other countries, but they generally become an invasive species.
3. Which of these US states selected a toad as their state amphibian?

Texas has chosen Bufo speciosus, the Texas Toad as their amphibian symbol. Despite the name, they range as far as Oklahoma, New Mexico and northern Mexico. Texas toads live in the desert and survive off of insects. The Texas Toad is quite common in the southwestern United States and is not endangered,

Louisiana has chosen the American green tree frog (Hyla cinerea), North Carolina chose the Pine barrens tree frog (Hyla andersonii), which is native to the state; and Arkansas did not yet have a state amphibian as of 2022.
4. Florida, Mississippi and Louisiana all have the alligator as their state reptile. Which state selected it first?

Each of them chose the American alligator (Alligator mississippiensis. Louisiana beat out Florida by four years, 1983 to 1987. Missisippi waited until 2005 to choose a state reptile.

Alligators range primarily in the southern United States, from the Carolinas to coastal Texas, American alligators are larger than their Chinese cousins. The largest of alligators can be up to 4.5 meters long, and weigh almost 450 kilograms (1000 pounds).
5. Of US states with state reptiles, about half have a turtle as their official reptile. What was the first state to choose an official state turtle?

Eastern Box Turtles, as the name suggests, are found primarily in the eastern United States, from Maine to northern Florida, and as far west as Michigan. The turtles are omnivores whose diet includes snails, insects, weeds and flowers.
6. What is the official state dog of Texas?

The official state dog of Texas is the Blue Lacy, which was created by the Lacy brothers (Georg, Erwin, Frank and Harry) in the 1860s. It was breed specifically to herd cattle and was very popular on ranches. They are also excellent hunting dogs.

Delaware has chosen the golden retriever. No state has yet chosen the Labrador or German Shepherd as official dog as of 2022.
7. What Midwestern state chose the American Water Spaniel as its state dog?

The American Water Spaniel is native to Wisconsin. It was created by Dr Fred J Pfiefer of New London, who registered it with the American Kennel Club in 1920. It became a recognized breed in 1940. It has been the state dog of Wisconsin since 1985, after a campaign by elementary students from New London.
8. The Nokota is what state's official horse?

The Nakota is the state horse of North Dakota. They are named after the Nakota native American tribe, which is found on the Badlands in western North and South Dakota.

The Nokota was threatened in the early part of the 20th century when ranchers tried to get rid of them. They were saved by the creation of Theodore Roosevelt National Park, where pockets of the horse were protected by federal law.

The Nokota horse is around 14 hands (56 inches) high, and is an unusual blue roan color, although there are also black and gray Nokotas.
9. Which of these crustaceans is INCORRECTLY paired with its respective state?

Texas does have a shrimp as its state crustacean, but it is the Texas Gulf Shrimp, which earned official recognition in 2015. The brown shrimp is the crustacean of Alabama.

The crawfish ( Procambarus clarkii.) is Louisiana's crustacean of choice. Maine is the Lobster (Homarus americanus) and Maryland is crabs (Callinectes sapidus).
10. Which two states have the Mexican Free Tailed Bat as their official state bat?

The Mexican Free-tailed Bat (Tadarida brasiliensis) is common throughout the southwestern United States. It is officially the "state flying mammal" of both Oklahoma and Texas.

The bats range from the southern United States, through Central America and all throughout South America as well. Some caves in Texas hold millions of bats. They are the world's fastest mammal, reaching speeds of over 101 mph.
Source: Author parrotman2006