Australian animals are unique, but, watch out, the most innocent looking may turn on you! Can you identify the 'attacker' from the clues given in the following ten questions? Answers are all multiple choice.

Quiz Answer Key and Fun Facts
1. I am a large marsupial mammal inhabiting nearly all of the Australian mainland. I am usually wary of humans, however, when provoked I can attack, overpower and kill adult human beings. What is my name?

The various species of Australian Kangaroo include the Red, Eastern or Western Grey and the Wallaroo or Euro. A fully grown Red Kangaroo (the largest of the species) can stand over 2m tall and has enlarged toes on each hind foot which are their most fearsome 'slashing' weapon, closely followed by their sharp incisor teeth which can do more damage than those of a fully grown and enraged stallion.
2. I am a small meat eating marsupial mammal that inhabits most of eastern Australia, with sharp teeth and sharp tree-climbing claws, and if cornered, I will fight ferociously. What am I?

The Quoll or Native Cat is a resourceful, bloodthirsty predator, capable of killing any prey, even those its own size. Related closely to the Tasmanian Devil, the first settlers referred to it as a Spotted Marten or a Polecat.
3. I inhabit the northern Australian rainforests and am usually a peace loving creature, but, if provoked I will hurl myself at any tormenter and deal slashing blows down upon them. What is my name?

With tapered claws not unlike daggers, measuring up to twelve centimetres long, the Cassowary, if threatened can inflict bloody wounds. People in Australia have died after an encounter with an enraged Cassowary.
4. Showing the least fear of humans, this Australian marsupial mammal that inhabits the southern and eastern coasts of Australia and Tasmania, has teeth strong enough to cut through trees. What is its name?

The placid, ambling wombat can display a devastatingly bad temper. With extremely powerful jaws and perpetually growing teeth encased in a body that is a solid ball of muscle, a wombat is strong enough to knock over a human and inflict terrible flesh wounds.
5. I am a somewhat anti-social tree climber, unique only to Australia and even though I appear cute and cuddly, I can inflict nasty wounds, usually out of sheer panic. What animal am I?

For all their endearing looks and sleepy demeanour, the Koala has strong, sharp claws that can be buried deep into flesh, inflicting severe wounds. Inhabiting the tallest eucalypt trees, Koalas usually avoid contact with humans but if handled roughly or clumsily, Koalas will inflict nasty scratches.
6. One of the animals that appears on the Australian coat of arms, this rarely exhibits aggression, but, if threatened, can inflict severe damage. What is this animal?

With an unpredictable nature, emus, which are generally taller than cassowaries, can inflict grave injuries with their clawed feet. Usually given to flight, emus are somewhat inquisitive and males especially, who look after the young, are very protective.
7. With twenty odd species inhabiting Australia, I am closely related to the modern day 'dragon' and can reach a length of 2.5m. If disturbed, I will usually flee but if cornered I will lash out with my large tail and can knock an adult over. What is my name?

Australia's goannas are renowned for mistaking stationary humans for trees and inflicting nasty scratches from their large claws as they desperately try to flee. All goannas will rear up on their hind legs and hiss fiercely at a perceived attacker, but it is usually a bluff.
8. This Australian animal, whose varied species inhabit most of the continent, could literally squeeze the life out of its prey. What is this animal?

The Australian Amethystine Python has been measured at a length of 8.5m or 28' - longer even than the renowned South American Boa. The average length is closer to 4m but with a weight nearing 20kg the largest of Australia's pythons can exert immense power and with a huge mouth and long fangs, can inflict nasty bites.
9. One of the oldest pure-breds of its type in the world, this Australian mammal has been branded as a killer of livestock and even babies. What is this animal's name?

The Australian Dingo was ruthlessly hunted by early settlers, to near extinction for some species. Both curious and a scavenger, Dingos that come into contact with humans may feel threatened and will attack with some ferocity. Rarely taking domestic livestock the Dingo prefers native prey or road kill and should be left to its own devices.
10. This animal chooses the Australian spring to show its true colours, with unprovoked, aggressive attacks on humans and domestic animals alike. What is this animal?

The Australian Magpie is ferociously territorial and in spring, the male of the species (particularly) engages in swooping attacks on perceived threats and is capable of inflicting very painful wounds. Most attacks are bluff, but some Australians have been nearly blinded.
Source: Author Engadine 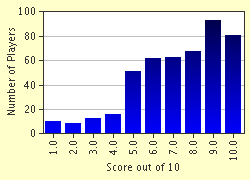