It's Nothing To Write Home About Quiz

When explorers arrived in Australia, they encountered many strange animals they'd never seen before. This quiz examines some of the unusual fauna of Australia, through the eyes of someone who discovered that there *was* something to write home about!

Quiz Answer Key and Fun Facts
1. Dear Mum, I wanted to tell you about an amazing animal, sometimes known as the 'bulldozer of the bush'. It's a slow moving marsupial with a stumpy tail that digs tunnels for safety and sleeping, preferably along creek beds. It looks cuddly, but it makes a dreadful noise to scare off perceived threats. Its common name is ....

Wombats have a backward facing pouch which means that any baby in the pouch is not showered with dirt while the mum is digging! They move slowly (unless they feel threatened, when they can move quickly if required) but sadly this means they are often knocked by cars when crossing country roads at night.
2. Dear Mum, I saw a Southern right whale today! I was amazed to learn that they were called that because they are found in southern waters, and for what other reason?


Answer: They were the right whales to sell at market

They were considered the right whales to be sold at market, due to the high percentage oil they contain, as well as the fact that they float when dead, making it easier for whalers to locate. Calving mother *do* swim up to beaches to give birth, and sadly, whale do sometimes beach themselves, for reasons unknown.
3. Dear Mum, This evening I saw a new animal - hopping from place to place to feed on grass and shrubs by itself in a rocky, sparsely grassed area. It's smaller than a kangaroo, and larger than a wallaby, and its name is a mix of those. It's called a ....

Wallaroos are marsupials which thump their feet to warn other wallaroos of danger, and cough or hiss when upset.
4. Dear Mum, I got laughed at the other day. I was sad, until I realised the one doing the laughing was sitting in an old gum tree, and is the largest kingfisher in the world! Can you guess what was laughing at me?

If we go for a picnic a little way past the city environs, we often see kookaburras. If you hold out food (raw meat is best, though they prefer mice or snakes!) they will sometimes swoop down and snatch it from you and keep flying past you up to the nearest tree. They often make sure what you've given them is dead by thrashing it against the tree branch. It's great to watch!
5. Dear Mum, The Aussies have come up with a quaint idea of using a small native animal as an Easter symbol instead of the rabbit, which is a real pest here. This animal has large ears like a rabbit, and, like much of Australia's native animal kingdom, is under threat from foxes, introduced to Australia (with no success) to hunt rabbits. Look for a chocolate _____ on the supermarket shelves at Easter!

For a picture of this cute, but endangered, creature you may like to look at this site: http://www.australianfauna.com/bilby.php. They are closely related to the bandicoots. The term bilby is an Aboriginal word meaning long-nosed rat.
6. Dear Mum, I visited Rottnest Island the other day, in Western Australia. There were the cutest little creatures there that looked at lot like miniature wallabies. The name of the creature was a great Scrabble word. This cuddly looking animal was called a?

Quokkas are very sociable, snuggling up together to sleep during the day and go about in large groups during the night.
7. Dear Mum, I heard someone singing today about a swagman who stowed a sheep in his tucker bag. 'Tucker' means food - do you know what unusual name he called the sheep?

According to the bush ballad by Andrew Barton "Banjo" Patterson, the troopers (police)tried to arrest the swagman for stealing a sheep (jumbuck). But the swaggie jumped into a nearby billabong, or pond, and drowned himself.
The song "Waltzing Matilda" from which this song comes, was suggested as a possible Australian national anthem in the 1970s!
8. Dear Mum, Today I saw that strange animal that everyone has been talking about. It's truly amazing! It has a bill like a duck, a tail like a beaver, has fur and it lays eggs! I've heard that the males have a spur that contains venom that can kill a dog, so I think I'll be content to enjoy their uniqueness from a distance!

Like much of Australia's wonderful wildlife, the platypus is under threat from loss of habitat.
9. Dear Mum, A friend took me to see something unusual today. From its name I thought we were going to go to an adventure park and take a cable slide across a valley. But instead we looked at some furry little mammals, which would look more at home in a vampire story! I was looking at ______ .

The flying fox is a species of bat that is covered from head to toe in fur, and feeds mostly on nectar and pollen. The grey-headed flying fox has a wing span of about 1 metre (3 feet). The Spectacled flying fox is slightly smaller in body size.
10. Dear Mum, One of my mates wanted to show me an animal he has prowling round his garden at night. At first I thought it was some sort of food, because he called it a spotted cuscus. Then, I discovered that it's a sort of _____ .

The spotted cuscus may be found in New Guinea, as well as the northern tip of Australia. Only the male is spotted. Like most possums, they are nocturnal, and find a cosy hole in a tree, or a clump of vegetation to hide in when not out foraging.
Source: Author VegemiteKid 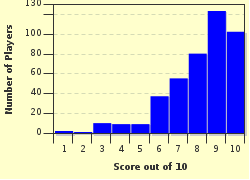