All about our Aussie fauna. We've got a unique range of animals, especially mammals, down under. What do you think you know about our dinky di creatures? All multiple choice.

Quiz Answer Key and Fun Facts
1. I am a monotreme mammal, one of only two in the world. I live on both land and water. What am I?

I am the platypus. The most adorable 'duck-billed' mammal in the world! I am nocturnal and solitary. My tail is broad and flat and my hind feet are used to help steer and brake while swimming. The male of my species has a venomous spur!
2. I live in the north of Australia, I have a large greyish blue bony protrusion on my head (called a helmet) and I can be rather dangerous if provoked. What am I?

I am the Cassowary. A large flightless bird of which three species exist worldwide, one indigenous to Australia. Usually placid, if angered I can be very dangerous, known to attack humans with great ferocity, lashing out with my dangerously clawed feet!
3. I am an extinct mammal, indigenous only to Australia. I was hunted to extinction in the wild in the twentieth century. What am I?

I am the Tasmanian Tiger, the Thylacine, a large marsupial carnivore, very dog or wolf-like. I had a long muzzle with large canine teeth, yellowish brown fur and a long tail. My young were born in late Spring/early Summer and were carried in a backward opening pouch.

The Tasmanian tiger preyed on many smaller animals than itself, or slow or defenseless animals like sheep
4. I am a small mammal and have been adopted as the Australian symbol for Easter. Instead of the Easter Bunny, we have the Easter, what?

I am the Bilby. A small marsupial rodent whose scientific name means 'hare-eared, big-ear'. I am endangered. I don't drink water but get enough moisture from the food that I eat. I sleep by day in deep burrows and forage at night and am found mostly throughout the arid, dry areas of Australia.
5. I am a small marsupial mammal with striped fur and a taste for termites and white ants. What am I?

I am a Numbat, also called the Banded Anteater. I have a brownish fur striped white and a pointed snout. I exist in the wild only in a small area south east of Perth in Western Australia. I will eat over 1,000 termites or white ants per day!
6. I am a medium sized mammal with a long nose. Sometimes called a rat kangaroo, what am I?

I am the Potoroo. I am a brown coloured, ground dwelling marsupial which has only one young at a time. I feed at night on roots, fungi, insects and their larvae and I range from Queensland to Tasmania.
7. Related to the sea-horse, what am I?

I am the Sea-dragon, a type of fish with two species, the Leafy Sea-dragon and the Weedy Sea-dragon. My body is covered in armour plates and my fins are so fine they are almost see-through! Like Sea-horses, it is the male that gets pregnant, bears the young, but doesn't look after them, they're on their own once they hatch!
8. I am a small black and white mammal. I have the reputation of being bad tempered. What am I?

I am the Tasmanian Devil. I have a spine-chilling 'screech', and can sound and look incredibly fierce! I am the world's largest surviving carnivorous marsupial, with a thick-set, squat build and a relatively large, broad head and short, thick tail!
9. I am a small monotreme mammal with a penchant for ants. What am I?

I am the Echidna one of only two monotreme mammals in the world - this means I lay eggs but feed my young on milk. My body is covered with two types of hair, a short coarse hair that keeps me warm and long sharp spines, each a single hair but hard (similar to a fingernail in composition)!
10. I live only in Western Australia. A small rat like mammal, what am I?

I am the Quokka, a small wallaby found mainly on Rottnest Island, near Perth. The island was named after me by Dutch explorer, Willem de Vlamingh, when he described me as a 'rat, the size of a cat' (Rottnest meaning 'rats nest' in Dutch). I am very unusual because I can survive in environments virtually devoid of freshwater and also because I can climb trees!
Source: Author Engadine 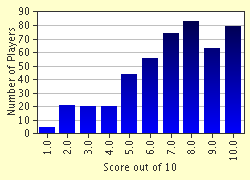