Cats Are Human Too Trivia Quiz

Cats and humans are more alike than you think. Are you able to correctly determine the similarities? Continue to find out.

Quiz Answer Key and Fun Facts
1. Cats and humans belong to which class of animals?

The hearts of all mammals are divided into four chambers. The largest animals of the world fall into the category of mammals. Animals such as cats, elephants, whales and even human and primates are mammals.
2. Cats and humans have skeletons made up of what?

Most living organisms are made up of a structure system that gives their body support and resistance from collapsing. Without this support system, vital organs and internal matter would be vulnerable to damage and injure. The skeletal system can be made up of a variety of material, but the typical skeleton system in mammals, birds, reptiles, fishes and amphibians is made up of bone.
3. The skeletons of both cats and humans can be described as which type?

Colostrum is a precursor to milk. It is generated and secreted by the mammary glands. Colostrum does contain milk as well as antibodies that aid the newborn in defense against disease and illness. A newborn's immune system is relatively immature at birth, thus colostrum is introduce into the baby's body to serve as the secondary defense against pathogens as well as a mild laxative which prompts the passage of stool.

All other listed above would be hazardous to a infant if introduced into the infant's body.
5. Cats and humans both can see. Both cats and humans use which sensory organ to visualize objects?

Auricle is the scientific term that describes the ear, the hearing organ. This organ receives sound and converts the vibrating sound to electrical impulses that can be detected and interpreted by the nervous system. This is the mechanism the body uses to interpret speech and language.
7. Cats and humans have the ability to detect odors in the air and also to determine the nature and origin of this odor. Both cats and humans use which organ to smell distinct odors?

Nasal cavum nasale is the scientific term that describes the nose, the organ used to smell odors. Odors reach the nose as chemical stimuli and are transported to the brain via the olfactory nerve to be received and interpreted as electrical impulses.
8. Cats and humans nurse their young while they develop and grow. The female of each species has specialized glands that produce and secrete milk. Both cats and humans use which organ to feed their young?

Mammary papillas is the scientific term that refers to breast, the organs that produces milk. Glands in the mammary papillas that manufacture and secrete milk are specialized fat cells. These fat cells have inherited the ability to manufacture and store milk until secretion only when initiated by the hormone prolactin.
9. Which bone forms the tail end in both humans and cats?

The coccyx is commonly referred to as the tailbone. It is the terminal end of the vertebral column in mammals. In humans, this bone serves mainly in a structural capacity. However, in cats and other animals, it forms the basis of the tail and enables motion and control of the animal's tail.
10. Both cats and humans have a number of biological systems that function effectively to maintain an internal balance; how many? 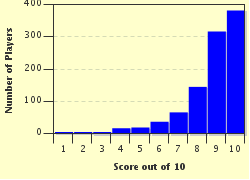 
Other Destinations
Explore Other Quizzes by jokerkevin