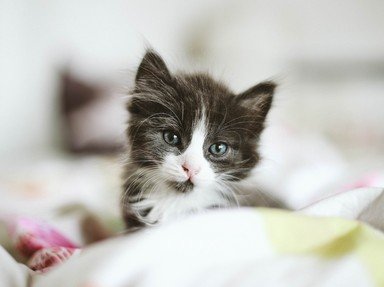 This quiz is about kittens and their development from Day 1. If you like cats, hopefully you'll like this quiz. Enjoy.

Quiz Answer Key and Fun Facts
1. What is the mother's first priority for her new kitten?


Answer: To get it breathing

To prevent the kitten from suffocating the mother removes the sac from the kitten's face. Luckily cats have a very rough tongue which is perfect for this job and for stimulating the kitten further.
2. As well as sustenance what does a mother's milk pass on to her kittens?

If the kitten takes the milk within 24 hours from the birth the milk contains antibodies from infections which the cat has been vaccinated against, or has suffered from. This protection is only temporary unfortunately.
3. There are 4 basic stages to a cat's development. The Neonatal Phase, the Socialisation phase and the Adult phase are 3, what is the fourth?

The neonatal is the first 2 weeks, the socialisation phase is in weeks 3 to 8, the juvenile phase is from 9 weeks to around 7 months, and adulthood is from then on.
4. When do the kittens' eyes open?

The most development goes on in the second week and female kittens' eyes tend to open earlier than males. Kittens that open their eyes early usually come from parents that had the same trait.
5. When does the kittens' hearing develop?

This is the week that ears unfold and ear canals develop. This will mean that kittens will react more to sounds now than in their first week. Some full white cats are born deaf, full white cats with blue eyes are almost certain to be deaf.
6. Which week do the kittens' milk teeth start to appear?

A kitten will eventually develop 26 milk teeth. They get their adult teeth at 3 months.
7. What week will the mother begin to discourage kittens from suckling, thus starting weaning?

By the 6th week, a kitten should start to be interested in solid food.
8. Once kittens start interacting with other cats and humans they begin to use body language. For example, pricked ears and tail held high means a cat or kitten is feeling friendly and approachable. What does it mean when a cat or kittens' ears are flat against the head, the back is arched and the tail is completely erect?


Answer: The cat is frightened

The cat is probably in a state where it doesn't know whether to attack or defend. The last thing it wants to do is eat or sleep.
9. Kittens can purr.

Kittens can purr from a very early age and the first instance would most usually be when feeding with its mother.
10. What is the very earliest date that a kitten should be rehomed?

This is when the kitten is developed enough to leave its mother. It is unfair to both mother and child to rehome at an earlier age. A few references will say that six weeks of age is a suitable age, but the vast majority of experts say eight weeks is the minimum age, with many saying ten or even twelve weeks is preferable.
Source: Author miaow 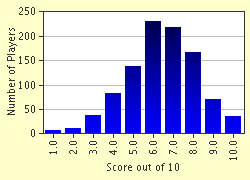 Related Quizzes
1. Big Cats, Small Cats, and Felines with "Cattitude" Easier
2. Why Does My Cat Do That? Easier
3. How Much Do You Know About Cats? Easier
4. Cats Are Human Too Easier
5. Cool Cats Jazz Average
6. Furry Pussycats Average
7. Cat-egorically Speaking Average
8. Cats Are Curious! Average
9. Polydactyl Cats Average
10. Meaow! Average
11. At Least the Cat Likes It... Average
12. Why Does My Cat Do That? Average