At Least the Cat Likes It... Trivia Quiz

Did you know there are human foods that cats can eat? And of course, there are others that they can't. Find out about some in this quiz. Good luck!

Quiz Answer Key and Fun Facts
1. Cats are meat eaters. However, which type of meat is not recommended to feed them, because of the high amounts of sodium they contain?

Cats can be fed meats like chicken breast, fish, turkey and hamburgers in small quantities, but cold cuts and fatty stuff like turkey skin are not recommended. They contain a lot of sodium and fats that can cause stomach problems.
2. There is a popular myth that cats like milk. Do all cats tolerate milk?

While some cats are perfectly fine drinking milk, some others can suffer diarrhea from drinking it. Most cats are not capable of producing an enzyme called lactase, which is in charge of properly digesting milk. Because of this, it is best to give your cat water.
3. There shouldn't be too much trouble if a cat eats some melon or cantaloupe. However, which part of the melon should your cat NOT eat?

Melons or cantaloupes in little amounts shouldn't harm a cat, but due to the high amounts of sugar and calories they contain, they must eat it moderately. Seeds could cause bowel obstructions in your cat, so it is important that your cat doesn't eat the seeds.
4. Because it contains oxidizing agents that can damage a cat's blood cells, which condiment should be avoided by cats?

Garlic, as well as onions, are not good for a cat's blood cells. Although your cat most probably won't die from eating garlic or onions, it is better if these are avoided.
5. Which of these fruits should never be eaten by cats because of the harm they could cause to their kidneys?

Grapes could cause severe kidney failure should they be ingested by cats or dogs, although the substance in the grapes that causes the damage has not been found. It's better to keep your cat away from grapes, sultanas and raisins.
6. Which of these plants, mainly used to make salad, do cats like and is relatively safe for them?

Lettuce in small quantities should not harm cats. However, spinach and Swiss chard are high in oxalic acid which may help the development of kidney and bladder stones. That is why cats shouldn't eat either spinach or Swiss chard.
7. Which frozen treat, often served in a cone, is not harmful for cats in small quantities?

Although ice cream contains milk, most cats are not harmed by eating small amounts of ice cream.
8. Which of these foods should you NEVER give your cat? (Hint: you should never give it to dogs either)

Chocolate contains stimulants that are potentially toxic to cats and dogs. Their digestive systems cannot tolerate chocolate.
9. Which of the following products is relatively safe for a cat to eat?

French fries are not likely to cause a negative effect on a cat's body, but certainly it should not be the main component of their diet. Raw eggs should never be eaten by cats as they could contain a number of infections. Grapes (and raisins) could cause kidney failure.
10. Cats love fish. However, some types of fish, such as tuna, can contain high levels of which dangerous chemical element?

Even though cats can eat tuna, halibut, cod and many other types of fish, it can also be dangerous for them as some of the fish, especially canned tuna, can contain high levels of mercury which can be harmful for your cat.

Cats like fish and there should be no risk in giving them fish, although their diet cannot be solely based on fish.
Source: Author Lpez 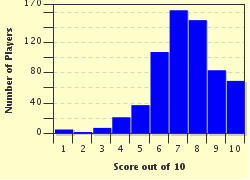 Related Quizzes
This quiz is part of series Author Challenges by Lpez:

A collection of quizzes I've written based on titles from the FunTrivia Author Challenges list. Enjoy!


1. The Great American Hamburger Easier
2. Things That Make Other Things Easier
3. It's Not Easy, Being a Plankton Easier
4. Cooking with Octopus Easier
5. I'm Aiming to Quease Average
6. Aibohphobia Average
7. That's Not How You Do It! Easier
8. Manic Monday Average
9. Fighting for Peace Average
10. Sad Pandas Very Easy
11. The Hens Are Coming Home to Roost Average
12. My Way or Norway? Average


Other Destinations
Explore Other Quizzes by Lpez