Cat coat colors range from black to white, and their patterns are unique! Still, some patterns show up again and again...

Quiz Answer Key and Fun Facts
1. The color effect produced by individual hairs with contrasting light and dark banding along each hair shaft is called which?

Ticked hair is also known as agouti, and is found in many wild felines. Domestic breeds which must have ticked coats are Abyssinians, Somalis, and Singapuras.
2. Tabby is the name given to a striped coat. Several types of tabby pattern occur both in domestic cats and in their wild relatives. What tabby pattern is most frequently seen in wild species of cat?

Classic tabby sounds as if it should be the original pattern, but is more commonly found in domestic cats. Blotched tabby is a synonym for classic. In some patterns, the stripes are shorter and break up into the spotted type of tabby.
3. I have a calico cat whose coat is attractively patterned with auburn and black patches. Which is most likely to be true?


Answer: The cat is probably female.

Both red and black colors are located on the X chromosome, so female cats (XX) can easily have one of each. The occasional male calico is probably an example of Klinefelter's syndrome, a genetic anomaly in which the kitten has an extra sex chromosome (XXY). Red coat color is usually found in male cats, although females occur, particularly in genetically-selected breeds. This pattern occurs in pedigreed and generic cats alike.
This question honors Diana, the ravishing daughter of a black-and-white father and red-and-white mother. She has a noble pedigree, and is a Turkish Van.
4. These cat breeds have only one recognized color, with one exception. Which?

Bombay cats are black, Chartreux blue, Havanas a rich solid brown. Turkish Angoras are most often white, but cats in a wide range of colors may be registered in Turkey, US and the UK.
5. The Peke-faced Persian cat has an extremely flattened face and a tiny nose actually depressed between the eyes. It was selectively bred from unusually short-faced Persians. Although Persian cats may have any colored coat, Peke-faces have only a limited number of acceptable colors.

Peke-faced Persian cats are all solid red or red tabby. Because of the extreme compression of the face, they are susceptible to tear duct and nasal problems. If a Peke-face looks as if he had the world's worst sinus headache, this could be the reason!
6. The Sphynx cat is known for its long, luxurious, fur.

Except for occasional fine down, Sphynxes are hairless. Tabby, tortoiseshell, tuxedo, van, and Siamese patterns can all occur on the cat's skin.
7. A white cat with colored patches on the ears and tail is said to have what type of coat pattern?

Named after the distinctive Turkish Van breed. Van patterns can be found with red and/or black patches or even tortie patches. Tuxedo cats have larger areas of black and white, with white chests. Siamese are the best-known "pointed" breed; their bodies are lighter with more intense coloring on the extremities.
8. A coat in which each hair is light-colored at its base but darkens toward its tip is called which of these?

Shaded, smoke and cameo are names used to describe this type of hair coloration. Beautiful on both short- and long-haired cats!
9. Winston Churchill was comforted in his last years by his beloved cat Jock. In his will, he left his home to the state as a museum, and specified that a cat named Jock should always live there. He also wanted the cats to look like the first Jock, including their color. What color?

When Churchill was in his eighties, his pet cat died and he decided not to get another as he felt certain the cat would outlive him. He sank into deep depression and waited to die. Friends brought him a kitten anyway, and Jock brought back joy into his life for several years.

This question honors Churchie, my youngest. He has a fine orange tabby coat and has an air of dignified reserve. He looks a little like a British Shorthair, but is really a straight-eared Scottish Fold.
10. Brown, brown, brown! No tabby, no ticking, no fooling around describes which of these cats? 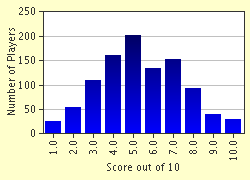 
Other Destinations
Explore Other Quizzes by ragiel