The Cat's Out of the Bag Trivia Quiz

I have an assignment to do an animal quiz. I do not know anything about cats, so let's see what I can learn.

The Asian leopard cat (ALC) is a small wild cat. There are about ten subspecies and range from India through East Asia up to Siberia and the various archipelagoes of Southeast Asia. They are distantly related to the leopard but are much smaller, about house cat size. Bengal cats go back to the 1930s.

They have beautiful spotting. I made up the three incorrect answers. Since the Bengal domesticated cat is spotted, rather than striped, I was pretty sure it was not related to the Bengal tiger, which is not a small wild cat.
2. OK, I always thought black cats were bad luck, but it appears that a specific breed of cat was developed because, as Wikipedia says, "Black cats seem to be universally loved." What cat breed resulted from the desire to develop a domestic cat with a "sleek, tight, black coat"?

According to a website on the history of the Bombay cat, Louisville, Kentucky, cat breeder Nikki Horner was inspired by the beauty of the black leopard of India and began breeding the Bombay cat in 1953, although it was first recognized as a new breed in 1976. If you google "Calcutta cat," you will find out about a type of boat called the Calcutta catamaran. Lhasa refers to a dog breed called the Lhasa Apso. If you google "Beijing cat," you will discover a volunteer organization dedicated to rescuing cats.
3. According to the website "Animal-World," there are four types of cats. Which of these four types are the "wild" cat species?

The lack of the term "breeds" is probably a giveaway to this question, as the website I was using for research uses the term "cat breeds" for the species it calls Felis catus or Felis domesticus.
4. Speaking of the four types of cats, which type, according to the "Animal-World" website, makes up "more than 99% of the world's total cat population"?

The website also uses the term "mixed cat breeds" for the hybrid group. It says a hybrid "is any cat that has more than one breed in its blood." Purebred domestic cats are the group of "natural cat breeds," while the "mutation cat breeds" are those bred for some specific unusual mutated characteristic, such in the cases of the Scottish fold or the Sphynx breeds.
5. My favorite cat is Felis concolor, a large wild cat with a wide range throughout the Western Hemisphere. What are common names for this beautiful cat?


Answer: all of these and more

The range of the cougar extends from southern Canada all the way to southern Argentina, and with forty names in English alone, the cat holds the Guinness record for the animal with the most names. In Iowa we often call it a mountain lion, but as the mascot for the University of Northern Iowa, we call it a panther. Penn State's Nittany Lion mascot is also of this species, as are the Cougar mascots of the University of Houston and Washington State.
6. Grumpy Cat was an internet celebrity, getting over three million "likes" throughout the middle of 2013, and the Grumpy Cat Inc. company had an estimated value of a million dollars. So what breed was Grumpy Cat (whose real name was Tardar Sauce)?

Owner Tabatha Bundesen says on the Grumpy Cat website that Tardar Sauce's mother was a calico domestic shorthair and her father "had gray and white stripes" without identifying a breed. She goes on to say that T.S. looked nothing like either parent, and she (Bundesen) is not even confident that the "father" was the actual father. Tardar Sauce's facial expression was due to feline dwarfism. Grumpy Cat's photo sessions were once a week and will always be available even though the cat has now passed on.
7. While most of the characters in the musical "Cats," are not intended to be identified by breed, I have been able to find three individuals who are. One of which is Griddlebone, often seen in various websites as Lady Griddlebone. She is distinctively described as a "fluffy white queen," and as such is identified as the breed that is the favorite of American cat owners. Which breed is this, which frequently features a flat or "peke" face?

Griddlebone is also a member of Macavity's crime group. Persians are a long-hair breed, while the other choices are all short-haired and are not often seen as white. The Persian was first developed in Britain, but since World War II has occupied the top spot among American cat breeders.

The "peke-face," named after similar characteristics of the Pekingese dog breed, is a recent development which has generated a lot of discussion among cat fanciers.
8. Famous cats of this breed include Mimi, once owned by John Lennon; Marcus, a gift to James Dean from Liz Taylor; and pets of two Presidential daughters, Amy Carter's Misty Malarky Ying Yang, and Susan Ford's Shan Shein. Name this breed, once known for crossing its eyes when angry, if you please.

Other Siamese celebrities, if you please, include British PM Harold Wilson's Nemo, Syd Barrett's Lucifer Sam (who was also the subject of a Pink Floyd song), and Anthony Burgess' Lalage. The Siamese characteristic of crossed eyes, once common with the breed, has been largely eliminated through selective breeding.
9. While searching for interesting information about cats by cat dummy, yours truly, (is there a book called "Cats for Dummies"?), I came across the term "tortoiseshell cat." Is that a breed or what?


Answer: It is a coat color variety, like tabby.

The tortoiseshell coat coloration has shades of red and black although the red shade may be up to orange color, with small areas of white or cream sometimes. Several breeds come in tortoiseshell, including both long and short hair. And, yes, there is not only a "Cats for Dummies," but also a "Kittens for Dummies." Before I attempt to do another cat quiz, I am definitely going to have to buy a book for help.
10. After reading about all these cats, the breed that still intrigues me most is an American breed whose origins are unknown. It is a large long-hair with at least two possible origins. One is that Marie Antoinette, before her execution, tried to escape France along with her favorite Turkish Angora cats. Long to short, she didn't make it, but the cats did, all the way to America. Another theory is that the cats originated from a mixture of Viking cats, perhaps ancestors of the modern Norwegian forest cat, and American cats. Can you guess which large breed inspired these stories?

One thing for sure, the Maine Coon cat did not originate as a mixture of cats and raccoons, something I know isn't possible, even though I don't know much about cats. One theory as to their origin is that they descended from long hair cats brought to America by an Englishman named Captain Charles Coon. 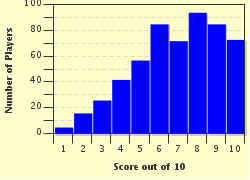 Related Quizzes
1. Kittens - The First Day Onwards Average
2. True/False : All About Cats Average
3. Why Does My Cat Do That? Average
4. All About Feral Cats Average
5. Catnip - Not Just For Stuffing Toys ! Tough
6. The Wonderful Cat Quizola! Average
7. The Older Cat Tough
8. The Truth About Cats Average
9. Fantastic Feline Fur Tough
10. Superstition and the Black Cat Impossible
11. Polydactyl Cats Average
12. Cats Are Human Too Easier