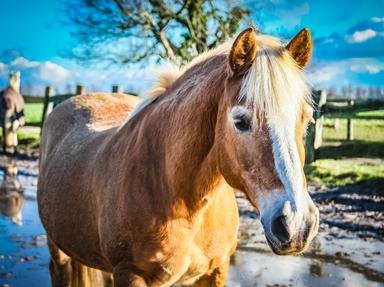 I am English, so these questions will be based on UK equestrianism.

Share on Facebook
Share on Twitter
Share by E-Mail
Author
Buzby
Time
4 mins
Type
Multiple Choice
Quiz #
90,565
Updated
Dec 03 21
# Qns
10
Difficulty
Average
Avg Score
6 / 10
Plays
5283
This quiz has 2 formats: you can play it as a or as shown below.
Scroll down to the bottom for the answer key.

Quiz Answer Key and Fun Facts
1. What is a grackle, in the horse world?

A grackle noseband forms an 'X' across the horse's face and is used to help prevent the horse from crossing his jaw to avoid the action of the bit.
2. The gaskin can be found on the horse's leg.

The gaskin (or second thigh) is the part of the leg between the hock and the stifle.
3. Equine rhabdomyolysis syndrome affects which part of a horse?

The disease causes severe cramping of the muscles in the horse, and can lead to kidney failure. It is usually caused by poor management of dietary intake relative to exercise requirements. A horse which is not being exercised requires less food than if it is being ridden.

Among others, it is also known as Monday Morning Disease, Tying Up and Setfast.
4. What can be Running, Standing or Irish?

Running and Standing martingales are usually used to prevent the horse from putting its head up above the point of control (evading the bit). An Irish martingale is used on horses who throw their heads around so much, that the reins can end up on one side of the head.
Note: you should never jump in a standing martingale.
5. The snaffle part of a double bridle is called what?

A bridoon is usually thinner than a normal snaffle.
6. How many chestnuts does a horse usually have?

One on each leg!
7. How many pairs of ribs do most horses have?


Answer: because the left and right sides of the brain have trouble transferring the information

Each eye of the horse works separately. Compared to a human, the horse only has a limited ability to cross-refer between the left and right hemispheres of the cerebral cortex.

Have you ever been riding a horse who spooks at something to his left, then realises it is not scary after all, only to react in exactly the same way when you change the rein? Now you know why - to the horse, he is seeing it for the first time.
9. Horses have traditionally been measured in hands. How many inches are there in one hand?

Horses are called ponies up to 14.2hh.
10. Is it okay to put a damp tail bandage on your horse?

You should never dampen the tail bandage, as this can cause it to shrink as it dries, which can cut off the circulation, and actually make the tail drop off. If you need to lay the tail, dampen the hairs, and then apply your bandage.
Source: Author Buzby

This quiz was reviewed by FunTrivia editor crisw before going online.
Any errors found in FunTrivia content are routinely corrected through our feedback system.
Most Recent Scores
Jan 27 2023 : Guest 174: 8/10
Jan 16 2023 : HorseGirl05: 9/10 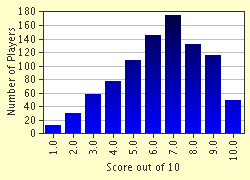 
Other Destinations
Explore Other Quizzes by Buzby