Let's help Garry Groundhog learn to use a taxonomic key to work out how his family fits into the scheme of things.

Quiz Answer Key and Fun Facts
1. Since Garry is quite sure that groundhogs are living things, the first decision he has to make is which domain they belong to. According to the key he is using, he needs to look at a cell, and see whether or not it has a nucleus. Taking a scraping from inside his sister's mouth and placing it under his microscope, he sees that they all have a dark spot, which is the cell nucleus. Into which of these kingdoms will he be placing groundhogs?

Cells with a nucleus are described as eukaryotes, a name that comes from the Greek words 'eu-' (good) and 'karyon' (nut or kernel). Cells without a nucleus are called prokaryotes, using the Greek word 'pro' (before) to indicate the belief of early taxonomists that this type of cell evolved before eukaryotes. Archae and bacteria are two of the subdivisions of prokaryotes.
2. Now that he knows what domain he and his family belong to, Garry faces the task of selecting their kingdom. Since he knows how much they love to eat grass (especially alfalfa) and juicy berries as they cavort around the fields during the day, he can answer the next question with confidence, and place them in which kingdom?

The names used for the various kingdoms have changed over the years, and usage differs between countries. Linnaeus, the man behind modern taxonomic classification, only established two kingdoms, Plantae and Animalia. As scientists discovered difficulty in allocating some organisms clearly into either of these, they decided that more kingdoms were necessary. Most of the debate as to how many kingdoms there are, and how they should be defined, relates to microscopic organisms, including fossils, and Garry can safely ignore them. Groundhogs are motile multicellular heterotrophs, which means they move around of their own volition, have more than one cell, and get their energy from eating other living things.

This makes them animals. The word animal comes from a Latin word meaning having breath.
3. Garry doesn't need any help in determining that groundhogs are chordates - they belong to the phylum chordate because they have a spinal cord. Since their spinal cord is encased in a protective bony covering made up of bones called vertebrae, he can deduce that they belong in which subphylum?

When you say the word animal, most people immediately envision a vertebrate - as Garry will see, most familiar animals that are large enough to see with the naked eye are vertebrates, including groundhogs and people. However, vertebrates actually only make up about 4% of the number of all species that have been described. All chordates have, at some point in their embryonic life, a notochord - a rod-shaped organ that protects the developing spinal cord. In vertebrates, this then develops into a system of flexibly-linked bones called vertebrae.

As well as vertebrates, there are some other families of chordates, including the tunicates (previously called urochordates), marine filter feeding organisms such as the sea squirt, and the cephalochordates, fishlike animals which retain a notochord, rather than the vertebral column found in fish.
4. Will these decisions never end? Now Garry has to check out his family's skin covering and reproductive cycle to decide in which class they belong. Ticking hair-covered skin (rather than scales, feathers or smooth skin) and the fact that his younger siblings all suckled milk from their mother for the first five or six weeks of their life, he follows the key to find that they belong in which class?

Mammals are distinguished from other vertebrates by the fact that they suckle their young - the class name comes from the Latin word 'mamma' (breast). They belong to the superclass tetrapodia, which means they are four-limbed animals with backbones. This superclass is divided into anamniotes (animals whose eggs must be laid in water, such as amphibians) and amniotes (animals whose eggs are adapted for birth on dry land).

The amniotes are divided into classes according to a number of features. For living ones, the simplest to recognize at a glance is the skin covering. Reptiles are usually covered in scales, birds in feathers, and mammals in hair or fur.
5. Okay, Garry girds his loins and looks at the next question, which has to do with the babies of his species. After considering his options, he decided that groundhogs are placental. Which of these descriptions of a baby groundhog did he tick?


Answer: Born live and formed roughly like an adult in miniature

There are tree infraclasses of mammals - Eutheria, Metatheria and Prototheria. Eutheria are also called placental mammals; they give birth to young which are essentially adult in form, although many features change as they develop to adulthood. Compared to other mammals, they are far more developed when they emerge from their mother. The infraclass name comes from the fact that the fetus is connected to its mother by a placenta, which allows nutrients to flow in to the fetus, and wastes to be removed from the amniotic sac.

External fertilization is typical of water-based reproduction, such as is found in fish and amphibians. Metatheria are also called marsupials; they give birth to young that are still very poorly developed, since they finish their development inside the mother's pouch before emerging to face the world. Prototheria are the monotremes, which lay eggs. They are still considered mammals because they suckle their young, but they are quite unusual animals. Next time you visit Australia, you may be lucky enough to be able to see one.
6. For the next taxonomic level of classification, Garry has to go check his family's teeth. When he discovers that they do indeed all have incisors that grow throughout their lives, he knows that they have to belong to which of these orders?

All rodents have teeth that grow continuously, so that they must gnaw steadily to keep them worn down to a reasonable length - hence their name, which comes from the Latin word 'rodere', meaning to gnaw. There are over 2,000 species of rodents in current existence, which is more than 40% of all known species of mammal. Most rodents eats seeds and fruits, which has caused them to be considered as pests by people who want to store these foods for human use.

At last, Garry feels as if he is getting close. Sciuridae include tree squirrels, chipmunks, flying squirrels, prairie dogs and groundhogs. All of these animals have slender bodies with bushy tails. Their hind limbs are usually longer than their forelimbs, and they typically have the ability to stand on their hind legs for long periods of time, although they are not bipedal in locomotion. Most of them are herbivorous, but some eat insects and even small vertebrates.

Aplodontiae have a different shape of skull and arrangement of teeth from other sciumorphs. Gliridae, which are mouse-like in appearance, are only found in Europe, Africa and Asia. Heteromyidae are much smaller and more rat-like in appearance than the average groundhog.
8. Close, but no cigar. Garry finds that he still has to make some more decisions to narrow down his family's spot in the tree of life. The next level is called a tribe, and the family with which Garry has identified contains a number of tribes. Which of these is the most appropriate choice?

Groundhogs, as their common name suggests, are terrestrial, and belong to the tribe of marmotini, which also includes prairie dogs and chipmunks. The members of this tribe are especially known for their ability to stand on their hind legs, and are often photographed in that erect position.

They are usually highly gregarious, and live in colonies. Compared to other squirrels, they tend to have rather short tails.
9. Will this never end? Now poor Garry is faced with selecting a genus for the groundhog. After careful consideration, he decides that it may belong to the genus Marmota. Which of these traits is NOT typical of a marmot?


Answer: They are carnivorous

Marmots generally eat grass and leaves, as well as berries, roots and flowers. They are definitely not carnivores! As well as groundhogs, there are a number of other species of marmots, most of which include the word marmot in their name. Marmots are social animals, although prairie dogs, classified in the genus Cynomys, are even more socially organized, but groundhogs are one of the least social members of the genus. Groundhogs are excellent burrowers, and often set up a separate winter burrow for their winter hibernation.
10. Garry takes a deep breath, and prepares for his last decision. Within the genus where he thinks his family belongs, there are a number of species. Considering where he lives, which of the following will he select as the appropriate species?


Answer: M. monax, found in much of North America

Groundhogs are found the eastern United States, as well as most of Canada and as far north as Alaska. The fairly-closely related prairie dog is found in most of the United States west of the Mississippi River. Possibly the world's most famous groundhog is Punxutawney Phil, who emerges each year on Groundhog Day (February 2) in Punxsutawney, PA, to 'predict' the course of the ensuing winter months.

His 'predictions' are based on the idea that there will be six more weeks of winter if he sees his shadow and retreats into his burrow.

In that part of the world, winter weather lasting until near the end of March is no surprise. Apparently Phil has been accurate in his predictions around 40% of the time, which is less than would be expected from random guessing. Still, it's a fun tradition.

It should be noted that Phil has been making predictions since 1887, although the lifespan of an average groundhog is 6 years in the wild, and nine-fourteen years in captivity.
Source: Author looney_tunes 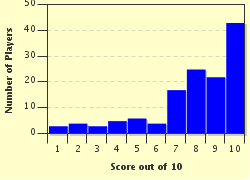 Related Quizzes
This quiz is part of series My Adventures in Authoring:

The Adventures in Authoring poses a series of opportunities for authors to extend themselves into new areas of quiz writing. These are some of the products of my Adventure.


1. 9 for 10 from Down Under Easier
2. Melbourne Cup Day Night Easier
3. I Write the Songs Easier
4. Come on Down Easier
5. Step Up and Play Easier
6. What Came Before 'Lord of the Rings'? Easier
7. Poems From my Childhood Easier
8. Gold! Gold! Gold! Average
9. Babe Average
10. Fungi, New and Mold Easier
11. Across All Micronesia Average
12. Going Against the Grain Average