Mr. Pig is our 4-H animal for this year in America, and he needs your help to be ready for the fair in August! Answer the questions so Mr. Pig knows what he's doing, and what we should be doing for him.

Quiz Answer Key and Fun Facts
1. The first thing we need to do for Mr. Pig is help him come into the world. Which birthing process do we help his mother use?

The other three are used by humans to bring children into the world. Pigs use the birthing method called farrowing, in which the sow is kept in a small pen, enough so she can turn, but not enough that she can squish and, as gross as it might seem, eat her babies, who are known as piglets. However, some of Mr. Pig's litter will not survive, despite all our attempts to help.
2. Next up, we need to make sure Mr. Pig is the right gender for the fair. Our fair only takes male, neutered pigs, which means that he needs to be which kind?

A boar is an unneutered male, a gilt is an unbred female, and a sow is a female who has had a litter. Most fairs will only take barrows for market and gilts for breeding. Sows and boars are, generally, not allowed in most fairs.
3. Now that we've made sure that Mr. Pig is the right gender and that he's gotten his shots, we need to notch his ears. What do the ear notches mean?

In pig ear notches, the right ear is the litter number, and the left ear is the pig number, in relation to when it was caught for notching. The litter number is useful in record keeping, so we know when he was born. Mr. Pig needs to be five months old for our fair, meaning he was born in March for a fair in August.
4. We've notched his ears, and now Mr. Pig is weaned from his mother. Our goal weight is 220, but more is preferable. What do we use to help him gain muscle?

We don't want to give Mr. Pig fats, because then he'll get fat instead of muscle! Vegetables and fruits are good as treats, but we don't want to give him too many of those either. For our food mixture, we'll use ground corn and concentrate made from soybeans and vitamins and minerals, including our protein.
5. It's now June, and we want Mr. Pig to start gaining even more muscle, because it weighs more than fat. We have quite a few options, but is walking him a good one?

Walking Mr. Pig is a very good idea, as it will help him get the exercise he needs without letting him get sunburned! A sunburned pig is not good, even for dark-skinned animals. A good time to walk Mr. Pig, especially during the summer, is in the evening when the sun is not as intense and the heat is lower.
6. Uh-oh, Mr. Pig's pen is starting to smell! What do we do?

When the pen starts to smell, it's been left for too long! It's a good idea to clean Mr. Pig's pen before it starts to smell. All other options are bad ideas while the pen is dirty, and the flies will need no help to get in. All three incorrect options can bring in disease, which we don't want Mr. Pig to get.
7. It's been unavoidable: Mr. Pig got sick! He's wheezing and not eating, and his urine does not come easily. What should we do?

Calling the vet is the best option, unless you're a vet yourself! Leaving him alone will worsen it, and in this case, he's likely to die rather than get over it. Isolating Mr. Pig is not a good idea, especially if he's already in a pen by himself. Pigs are very social creatures, needing contact with others of their species, or else to make friends with other animals.
8. It's coming close to fair time, and since Mr. Pig's been in a quiet barn, we're worried that he won't be ready for the noise of a fair. Which is a good option to help him?


Answer: Turn on a radio

While pigs are not as flighty as, say, cattle, pigs still startle. And since Mr. Pig's been in a quiet barn most of his life, he might not take to being moved or having another animal intrude on his space. Turning on a radio to simulate the variety of noises found at a fair is a good way to help Mr. Pig become used to noise.
9. One of Mr Pig's siblings might be at the fair. How many piglets could be expected from a normal litter?

An average litter can be anywhere from 8 to 14 piglets. Farmers are developing their animal husbandry in some countries such as Denmark, with litters now averaging 14 piglets and sows bearing over piglets a year!
10. Well, it's finally over, and Mr. Pig is at the sale. We walk him around the sale ring, making sure that everybody can see him, and when he's sold, we take him back to his pen. What should we do next?


Answer: Thank the buyer and as many bidders as we can remember after caring for our animal

The best thing is to make sure that Mr. Pig has water and is sprayed down with water, especially if it's hot, then go and thank the buyer at the minimum. Most fairs have exhibitors send letters out to potential buyers, and many will at least bid on animals whose exhibitors sent them letters. It's a good idea to also thank those who bid on Mr. Pig.
Source: Author SpaceGirl451 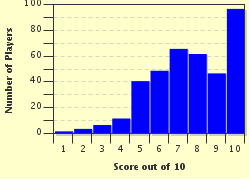 
Other Destinations
Explore Other Quizzes by SpaceGirl451