Many breeds of domestic livestock are threatened with extinction. This quiz provides information on some of those breeds of pigs as listed by the Livestock Conservancy and why they just might be worth saving.

Quiz Answer Key and Fun Facts
1. Which of the following swine breeds has the same markings and the same name as a famous red and white breed of cattle?

Hereford hogs were developed in the Midwestern United States early in the 20th century specifically to look like Hereford cattle. Most likely they were developed using genetics from the solid red Duroc breed as well as Poland China and Chester whites. Not only was a striking breed created but one that is productive in open housing systems in both purebred and crossbred programs.
2. Which of the following is a small statured breed of swine that shares its name with two countries and a member of the rodent family that is often kept as a household pet?

Guinea hogs were a traditional farm pig of the American south. They are excellent foragers and rooters and also kept house yards free of snakes. They produce much smaller carcasses than today's commercial breeds but are excellently suited for households' that raise and process pork in the traditional fashion and would provide the same benefits now as they did to our ancestors'. And yes, the young of this breed could correctly be called "Guinea pigs".
3. Which of the following is a lop-eared breed of British origin that is black in color and named for its distinctive white strip of various widths across its shoulders?

The saddleback is often also known as the British saddleback. It can be confused with the Hampshire which also has a white saddle but has upright ears. The saddleback is an excellent forager that has a lot to offer farmers interested in pasture raised pork management systems.
4. A rare breed of swine that has proved invaluable to scientists in developing a deeper understanding of human diabetes comes from which small island off of the Georgia coast in the United States?

There are likely just a few hundred Choctaw swine left in the world. These pigs are extremely athletic and have thrived in a free range management system for hundreds of years. With today's confinement systems there has been less demand for free roaming breeds which has reduced the numbers of this unique, mid sized breed.

The other Native American nations listed were all natives of what is now the American southwest.
6. One rare breed of American swine is named for its unique single toed foot that more closely resembles an equine foot than the split toes of most swine breeds. Which of the following breeds is this?

Mulefoot hogs are exceptionally rare with likely only a few hundred in existence. This breed was common in the United States as of 1900 but is another breed that lost favor as pork production moved to confinement production. This breed is known as very efficient and fatten easily on limited feed and certainly could have a place where those characteristics are still important.
7. This red breed of swine with upright ears shares its name with a city in England and a city in New South Wales, Australia. What is it?

Tamworth hogs are not as rare as several of the other breeds discussed but they are still a minor breed. This was an important breed in the 19th and early 20th century and was one of the first "bacon" breeds that was raised for lean meat production instead of lard production.

The breed is a good forager that can work well in pasture based swine operations and can certainly add hardiness to swine operations.
8. Which of the following swine breeds is of English origin, one of the oldest pedigreed breeds of swine and must have at least one spot on its body to be eligible for registration?

Gloucestershire old spots are known for docility and intelligence which is likely why they earned their nickname as the "orchard pig". They are well known for producing flavorful pork and are very well suited for pasture raised and extensive pork production systems. It has been reported that this is the preferred pork of the British Royal Family.
9. Red wattle pigs are a derived from heritage stock but were not identified as a breed until the 1970s. They are named for what unique physical characteristic that is not shared by most swine breeds?


Answer: Wattles on their neck

Ok, so sometimes swine breeders are not the most imaginative. "I have red hogs with wattles on their neck, what am I going to name them"? Wattles are fleshy growths below the jaw on either side of the neck with no known function and Red Wattles are not the only swine across the world that has them but they are certainly uncommon in domestic swine breeds.

This breed became quite popular for a while in the 1970s and 1980s not only because of their distinctive appearance but because when crossed with the pigs of the time they added hybrid vigor and hence productivity.

These pigs have probably been around for a long while but were first popularized by a Texas breeder. By the late 1990s they were exceptionally close to disappearance but dedicated work by a number of breeders have brought their numbers up to probably over 2000 across the United States.

In addition to their appearance they still are certainly productive in the right type of swine operation.
10. This breed of swine with British origins was once named the lop eared black, but because of their large frame size and rapid rate of growth they were renamed what?

And who said swine producers were not imaginative? This breed was very popular when swine was primarily raised out of doors with their rapid growth, excellent foraging skills and ability to produce large litters. However, they became a minority breed when swine production was largely shifted to confinement systems. With a renewed interest among chefs and some consumers for pasture raised pork, large blacks and several other heritage breeds have enjoyed a resurgence in interest.
Source: Author kuecks 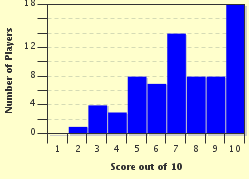 
Other Destinations
Explore Other Quizzes by kuecks