This is a quiz about my favorite livestock animal.....pigs.

Pigs are simple stomach animals. Therefore, they are monogastric animals.
2. Which of these breeds of swine is considered one of the oldest English breeds?

The Berkshire originated in England. The Berkshire is a black pig with 6 white points (four white feet, white on the face, and white on the switch of the tail). The Landrace is a breed developed in the 20th century, while the Duroc and Chester White are American breeds.
3. Pigs have ineffective sweat glands.

They wallow in water and mud to keep themselves cool as their few sweat glands are ineffective at keeping them cool.
4. The scientific name for the domestic swine is Sus domesticus.

Sus scrofa is the wild boar.
5. What is the native land of the Landrace breed of pig?

The Landrace originated in Denmark. The Landrace is a white pig with long, droopy ears that can cover the pig's eyes.
6. Pigs are considered carnivores.

Pigs are omnivores. In captivity they might eat their own young.
7. What country has the greatest pork production?

The Yorkshire is an all white breed of pig with erect ears.
9. On which continent are pigs not found?

Pigs are found almost everywhere on earth.
10. Which breed of swine originated in China?

Meishan pigs are from China. This breed of pig has a very wrinkled face and wrinkled skin. They are known to be very prolific, and have large litters (15 to 16 piglets).
Source: Author alley_24 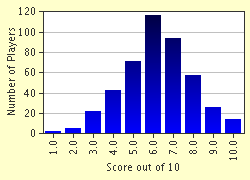 
Other Destinations
Explore Other Quizzes by alley_24