While playing the Animals category, I noticed that there were none about pigs. We had the divine swine on my father's farm when I was a kid. So, here's oinking to you. Enjoy.

Quiz Answer Key and Fun Facts
1. Which is not a major breed of hogs?

Shropshire is a breed of sheep that orginated in western England. Yorkshire hogs, known as the "mother breed" also originated in England around 1800. Berkshire, one of the oldest breeds of hogs, was developed in the Shire of Berks, England. Poland China swine orginated in Ohio. Bet you thought is was China or Poland! The man who bred them was of Polish descent and the original name for his hog was Big China.
2. What is a mother hog called?

A boar is a male. A gilt is a female that has not yet given birth. A shoat is a pig eight weeks old that has been weaned from his mother, the sow. A shoat can be up to one year of age according to some sources.
3. Hogs are what?

Pigs, especially in the wild, feed on both plants and animals which makes them omnivorous. They eat leaves, roots, grains, small rodents, young birds, earthworms, reptiles and reptile eggs. An average farm yard hog eats about 3.7 pounds of food a day. If a hog is in a grazing pasture, it spends seven hours eating per day.
4. Pigs are found on all continents except which one?

Too cold there for most everything, of course. Christopher Columbus and Hernando de Soto both brought pigs to the Americas. Europe's pigs came from Asia. Europeans brought pigs to Australia as well.
5. The country that is both top-producer and top-consumer of pork is what?

China is tops at 50% in both categories; production and consumption. The United States is second in production at 10%. France is fifth in world production and Canada is eighth.
6. Since the early 1800's this city has been widely known as "Porkopolis" because it is a major pork processing center. Which city is it?

In 1818 pioneer pig sticker, Elisha Mills, opened Cincinnati,Ohio's first slaughterhouse. Pork in brine-filled barrels were packed and salt pork became a U.S. food staple. Within a short decade Cincinnati was nicknamed "Porkopolis."
7. The average mother pig gives birth to a litter of how many piglets?

Average litter size is between eight and twelve. Most mothers give birth two times a year. The largest recorded number of piglets born in one litter was thirty-four.
8. Which ancient people so loathed to be separated from fresh pork that the deceased were sometimes accompanied to the grave with their herds of pigs?

Pork still remains an important food to the Chinese.
9. It was once a practice at country fairs to grease a pig and let it loose among blindfolded contestants. The man who successfully caught the greaser could keep it and hence arose the saying of what?

Sounds tough. The supermarket is much easier.
10. Scientists believe pigs are very intelligent animals, close behind man, apes and dolphins.

Pigs are smart and curious animals. They are one of the few animals that won't overeat.
Source: Author donna399 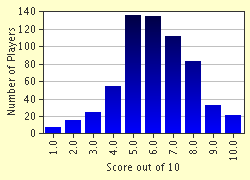 
Other Destinations
Explore Other Quizzes by donna399