A Bouquet Without Vowels Trivia Quiz

Here is a bouquet of ten common flowers. They have lost their vowels. Can you figure out what they are? Make sure to check how many letters are in the correct answer. It may help you.

Tulips are thought to have originated in Central Asia and were introduced to the European continent in the mid-16th century. An interesting fact about tulips is that they require "vernalization", which means that the tulip bulbs need a prolonged period of cold weather before they will flower.
2. DNDLN

The dandelion is a very useful flower. It is used in medicine, as a dye, and for food. In many cultures the dandelion represents the heavens. The yellow flower represents the sun, the puff ball is thought to represent the moon and the dispersal of the seeds resembles the stars in the sky.
3. LVNDR

The lovely lavender plant has been used for centuries for bathing, herbal medicines, and as an insect repellent. Lavender nectar can be used to make a high quality honey. In ancient Egypt, lavender was used in the mummification process and was sometimes used on the wrapping linen because of its delightful fragrance.
4. CRNTN

Carnations are native to the Mediterranean area and it has been cultivated for centuries. Originally, they were pink or purple but are now grown in almost every color of the rainbow. They are often used as boutonnieres.
5. ZL

The azalea is a dark green bush/shrub known for its flamboyant blossoms which come in almost any color. Some of the most beautiful examples exist in China and Japan where they have been cultivated for centuries.
6. BGN

The beautiful begonia is native to subtropical regions of South America but can be found growing in warm climates around the world. Begonias are usually red, white, pink, or yellow. Begonia bushes are known for the large amount of blooms that they will produce each year.
7. PTN

Petunias are native to South America, and grow best in subtropical areas. They come in many colors and some varieties will flower all year. Petunias love sunlight and are fairly easy to grow.
8. GRDN

The beautiful white gardenia blossom is world famous for its wonderful fragrance which has been used in perfumes for centuries. It is the national flower of Pakistan and is often worn as a boutonniere by men when wearing a tuxedo.
9. DSY

The daisy usually comes with white petals surrounding a bright yellow center. In warmer locations they will bloom all year around. The daisy stands for youth and innocence.
10. ZNN

The zinnia is native to southeran areas of North America. There is one flower per stalk that is usually red, yellow or orange. Zinnias are named for the German botanist Johann Gottfried Zinn.
Source: Author dcpddc478 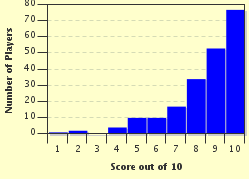 Related Quizzes
This quiz is part of series Teasing You Brain:

A group of brain teasers with which to tease your brain.