On the 29th of May 2003, Comedian Bob Hope turned 100 years old. Part 2 touches on his early career, the 'Road Pictures' and his love affair with Hollywood and America.

Share on Facebook
Share on Twitter
Share by E-Mail
Author
graz1
Time
3 mins
Type
Multiple Choice
Quiz #
134,045
Updated
Jan 04 23
# Qns
10
Difficulty
Average
Avg Score
6 / 10
Plays
833
This quiz has 2 formats: you can play it as a or as shown below.
Scroll down to the bottom for the answer key.

In addition to delivering meat for his brother's meat market, Bob earned money at all of the above.
2. After High School Bob did a short stint as an amateur boxer?

He fought under the name of Packy East. He said he quit because he "was not only being carried out of the ring, but into the ring."
3. Bob started his Vaudeville career as one half of a ________ team?

At 18, Bob and his girlfriend, Mildred Rosequist performed a dance act at nearby Vaudville houses. Shortly after he teamed with friend, Lloyd Durbin and later George Byrne.
4. Bob Hope made seven 'Road Pictures' with another well known actor and good friend. What was his name?

Hope and Crosby portrayed second-rate show business actors and third rate con men. Dorothy Lamour also was in all seven 'Road Pictures' however in "Road to Hong Kong" Joan Collins had the female lead and Dorothy had a cameo appearance playing herself, which was enlarged as financial backing depended on her appearance.
5. What year were Bob Hope and Delores Reade Hope married?

Sixty nine years as of Bob's 100th birthday, a long time by any standards, probably a record in Hollywood. They have four children and 4 grandchildren.
6. What year did Bob receive the "Kennedy Center Honors Lifetime Achievement Award"?

His first appearance was in 1940, and his last in 1978.
8. How many Emmy Award nominations has Bob Hope received?

Bob never received an Academy Award nomination. He used to joke about the Academy Awards, "At our house, we call it Passover."
10. How many times has Bob Hope been honored by the Academy of Motion Pictures Arts and Sciences?

Bob has been honored by the AMPAS 5 times:
1941 - In recognition of his unselfish services to the motion picture industry (special silver plaque).
1945 - For his many services to the Academy (Life Membership in the AMPAS).
1953 - For his contribution to the laughter of the world, his service to the motion picture industry, and his devotion to the American premise.
1960 - Jean Hersholt Humanitarian Award.
1966 - For unique and distinguished service to our industry and the Academy (gold medal).
Source: Author graz1

This quiz was reviewed by FunTrivia editor gtho4 before going online.
Any errors found in FunTrivia content are routinely corrected through our feedback system.
Most Recent Scores
Jan 15 2023 : BarbaraMcI: 8/10
Dec 13 2022 : misstified: 8/10 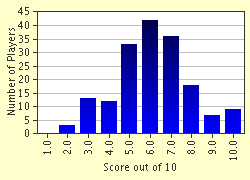 Related Quizzes
1. 100 Years of Bob Hope - Part 1 Tough
2. All You Need is Hope Average
3. Bob "Man-of-Many-Nicknames" Hope Tough
4. Bob Hope and the USO Difficult
5. Road To Bob Hope Average
6. A Fond Look at Nigel Hawthorne's Life Easier
7. A Look at Rashida Jones Average
8. A Star is Born: Julianne Hough Average
9. All About Carolyn Jones Average
10. All about Chris Hemsworth Average
11. All About Garrett Hedlund Average
12. All About Halle Hirsh Average


Other Destinations
Explore Other Quizzes by graz1