All You Need is Hope Trivia Quiz

Bob Hope headlined in 57 USO tours, and still managed to find the time to do a 'few' other things. Here are just 10 moments from his storied career.

Quiz Answer Key and Fun Facts
1. While Bob Hope was known as a 'ladies' man', he was married to the same woman for 69 years. Who was the American singer he married in 1934?

While all four choices were women Bob Hope was romantically involved with, Dolores was the woman he married on February 19, 1934, in Pennsylvania. They remained married until his death in 2003, making their marriage one of Hollywood's longest unions. While Dolores had a professional career as a singer, performing under the name Dolores Reade, she involved herself with the USO tours and raising their four adopted children instead of pursuing her career.

She did, however, record four CDs of her own, the first at the age of 83, titled "Dolores Hope: Now and Then". Bob Hope has four stars on the Hollywood Walk of Fame, one of which is located at 7021 Hollywood Boulevard - the same address as Dolores' star.
2. Starring Bob Hope and Bing Crosby, "The Road to Zanzibar" was the first in their series of 'Road to..' movies.

1940's "Road to Singapore" was the first of the seven 'Road to" films made between 1940 and 1962. The first six starred Bob Hope, Bing Crosby and Dorothy Lamour, while the seventh starred Joan Collins instead of Lamour. "The Road to the Fountain of Youth" was planned for 1977, but an accident sidelined Crosby, delaying the production, and his death later that year put an end to the film. The 'Road to' films were all lighthearted comedies, with romance, music, and a lot of ad-libbing by Hope and Crosby.
"The Road to Zanzibar" came out in 1941, making it the second film in the series.
3. In 1946 Bob Hope became a partial owner of a Major League Baseball team. Which Midwestern team did he invest in?

Bob Hope was part of an investment group, headed by Bill Veeck, which purchased the Cleveland Indians in 1946. Hope had grown up in Cleveland, and had a vested pride in the city and the team. Retaining his ownership in the Indians for the majority of his life, Hope was an avid supporter of the team. From 1931 to 1993, Cleveland Stadium was the home ground for the Indians. On October 3, 1993, the last day the Indians would play in that stadium, Bob Hope led the teams' fans in a performance of "Thanks for the Memory" with customized lyrics.
4. In 1956 Bob Hope guest starred on "I Love Lucy", in an episode where Lucy spots him at which iconic American location?

With all of Lucy's madcap antics and endearing ambition, in the episode titled "Lucy and Bob Hope" Lucy spots Bob Hope at Yankee Stadium, and is determined to get him to appear at Ricky's club - the Club Tropicana. In her inimitable style, she tries to approach Hope, first disguised as a hot dog vendor, then as a crude umpire. The episode was set at a Yankees-Indians game, and Hope was actually a partial owner of the Cleveland Indians baseball team
"I Love Lucy" ran from October 15, 1951 - May 6, 1957, with the Bob Hope episode airing on October 1, 1956. From 1957 to 1960, "The Lucille Ball-Desi Arnaz Show" aired, followed by "The Lucy Show" which aired from October 1, 1962 - March 11, 1968. While the cast and characters (the Ricardos and Mertzes) were the same in the first two series, "The Lucy Show" starred Lucy as the widowed Lucy Carmichael, and Vivian Vance as the divorced Vivian Bagley.
There were a number of noted guest stars between the three series, including Harpo Marx, John Wayne, Ginger Rogers and Vincent Price.
5. In 1968 Bob Hope had a cameo appearance on the television series "Get Smart", playing which type of character?

"Get Smart" was created by Mel Brooks and Buck Henry, and ran from September 18, 1965 - May 15, 1970. The series featured Maxwell Smart as Agent 86, an incredibly dedicated, and incredibly inept, secret agent working for CONTROL, an American counter-intelligence agency.

Their usual foes worked for an agency named KAOS. The series also starred Barbara Feldon as Agent 99 and Edward Platt as their Chief. In the episode which aired on February 17th, 1968, Agent 99 resigns from CONTROL to marry a hotel/casino owner - who is actually a KAOS secret agent. Bob Hope's appearance as a bellboy at the hotel is brief, but memorable.
6. On September 16, 1968, Bob Hope and Richard Nixon appeared on the same television program. Which program, where the future president said "Sock it to me?", was it?

The episode, which aired on September 16, 1968, also featured the guest appearances of Hugh Hefner, Zsa Zsa Gabor, Jack Lemmon and John Wayne. Richard Nixon, running for, but not yet elected to, the presidency, appeared for a "Sock it to me!" scene. Unlike the usual result of such a request, he was not doused or otherwise assaulted. Bob Hope guest starred on the program at least two other times - in 1969 and 1971. The program, which ran from January 22, 1968 - March 12, 1973, had a large and talented regular cast, including Lily Tomlin, Goldie Hawn, Ruth Buzzi, Arte Johnson, Judy Carne and Flip Wilson.
7. Bob Hope appeared on "The Muppet Show", on February 11, 1978.

"The Muppet Show", which was created by Jim Henson, ran from September 13th, 1976 - March 15th, 1981. In the episode guest starring Bob Hope, Hope appeared backstage, dividing his time between "The Muppet Show" and several charity shows. A few scenes later, having decided to skip out on a charity appearance for the Flying Zucchini Brothers, he appeared on stage with Kermit.
"The Muppet Show" had dozens of guest stars over the years, with none appearing more than once. Just a few other 1978 guest stars included Elton John, Julie Andrews, Peter Sellers and Liberace.
Bob Hope also had a cameo appearance in 1979's "The Muppet Movie".
8. Bob Hope guest starred on a television program in 1989, which was set in Miami, Florida. Which sitcom, with a regular cast of four older women, was it?

Centered around four older women living together in Miami, Florida, "The Golden Girls" showcased their problems, interactions and successes. The episode titled "You Gotta Have Hope" aired on February 25, 1989. Dorothy, played by Bea Arthur, has to organize a talent show, which seems to have more problems than possibilities.

When Rose, played by Betty White, says she knows Bob Hope, and can get him to host the talent show, Dorothy is less than confident in her friend's claim. "The Golden Girls" aired from September 13, 1985 - May 9, 1992, and starred Bea Arthur, Betty White, Rue McClanahan and Estelle Getty.

The series won two Emmy awards and three Golden Globe awards.
9. In 1992, Bob Hope made a guest appearance on which long-running animated show?

"The Simpsons" first appeared as a series of shorts on "The Tracey Ullman Show" in 1987. The shorts were developed into a prime time show, which debuted on December 17, 1989. The episode with Bob Hope, titled "Lisa the Beauty Queen", aired on October 15, 1992.
Matt Groening created the characters, and along with James L. Brooks and Sam Simon developed the series. The series has won over 25 Emmy Awards, and has become a cultural phenomenon. In 2000, the Simpson family was given a star on the Hollywood Walk of Fame.
10. In 1995, Bob Hope joined Presidents Gerald Ford, George H.W. Bush and Bill Clinton in what type of activity?

A golfer who truly loved the game, and played in numerous charity tournaments over the years, Bob Hope found both joy and humor in the sport. In 1978 he appeared on "The Mike Douglas Show", and putted against a 2 year-old future golf legend - Tiger Woods.

The Palm Springs Golf Classic, a professional golf tournament which was founded in 1960, was renamed the Bob Hope Classic in 1965, and Hope became the Classic's Chairman of the Board. The 1995 pro-am team of Bill Clinton, Gerald Ford, George H.W. Bush and Bob Hope was the first time a sitting president (Clinton) participated in a PGA tour, and quite possibly the first time three American presidents had golfed together.

The Classic was hosted by Hope for several years, and drew a number of celebrity participants, including Bing Crosby and Kirk Douglas.
Source: Author beergirllaura 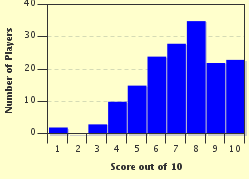