On the 29th of May 2003, Comedian Bob Hope turned 100 years old. This quiz is mainly a tribute to the man for the support and entertainment he so willingly gave throughout his career to the men and women of the Armed Forces of the United States.

Born in Eltham, London, England his family moved to Bristol prior emigrating with his parents to America in 1908 (some sources say 1907). He was granted American Citizenship in 1920.
2. What was his birth name?

Bob made his first USO Tour in 1942 to Alaska and the Aleutians, his first combat tour was in 1943, visiting U.S. forces in North Africa, Italy and Sicily. His first performance before the troops (not a USO Tour) was at March Field on 6 May 1941
4. When was Bob's first Christmas USO Tour?

His first Christmas USO tour was in 1948 performing for the troops who participated in the Berlin Airlift. He continued making Christmas tours overseas from the late 40s thru the early 70s and trips to Military and Veterans hospitals stateside in the 70s and 80s.
5. How many USO Tours did Bob Hope make?

Bob made an incredible 47 USO Tours, sometimes twice a year, visiting troops stationed throughout the world.
6. When did Bob make his last USO Tour?

In October 1997, the members of both houses unanimously passed Resolution 75 making Bob Hope an Honorary Veteran, the first individual so honored in the history of the United States.
8. The U.S. Navy named a ship after Bob Hope?

The USNS Bob Hope (TAKR-300), the first of a new class of Military Sealift Command ships, was christened on 15th March 1997 and delivered to the Navy on 18th November 1998. The lead ship was named Bob Hope to honor the over 50 years of support he gave to the US Armed Forces around the world. With the USNS Bob Hope, the spirit of this great entertainer will continue to support the armed forces well into the 21st Century. In February 2003 the USNS Bob Hope deployed to the Persian Gulf transporting equipment in support of operations.
9. What type of airplane did the Air Force name after Bob Hope?

In May 1997, a little more than a month after the christening of the USNS Bob Hope, the Air Force unveiled the 'Spirit of Bob Hope' a C-17 Globemaster 3. Secretary of the Air force, Dr. Sheila Widnall said at the ceremony, "we're here today to extend a symbol of thanks to a man who has brought cheer and moral support to men and women of the service for well over 50 years," adding that the comedian began his tours even before the Air Force came into being.

In 2001, it was the 'Spirit of Bob Hope' that transported the pilots and crew, of the reconnaissance plane downed in China, back to Hawaii.
10. Bob Hope's signature song was "Thanks for the Memory"?

From myself, and the millions of men and women who served or are serving in the Armed Forces, Thanks for the memories Bob.
Source: Author graz1 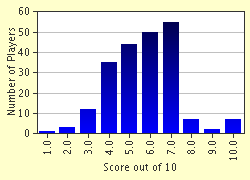 Related Quizzes
1. 100 Years of Bob Hope - Part 2 Average
2. All You Need is Hope Average
3. Bob "Man-of-Many-Nicknames" Hope Tough
4. Bob Hope and the USO Difficult
5. Road To Bob Hope Average
6. A Fond Look at Nigel Hawthorne's Life Easier
7. A Look at Rashida Jones Average
8. A Star is Born: Julianne Hough Average
9. All About Carolyn Jones Average
10. All about Chris Hemsworth Average
11. All About Garrett Hedlund Average
12. All About Halle Hirsh Average


Other Destinations
Explore Other Quizzes by graz1