This quiz is about rappers who had a great impact on the hip hop industry, but they are now deceased. I'll give you the date and cause of death, you give me the rapper.

Quiz Answer Key and Fun Facts
1. What is the name of the rapper who died in 1995 due to complications of AIDS?

Eric "Eazy E" Wright was the founder of the record label "Ruthless Records", and the group "NWA". He is credited to starting the gangster rap genre.
2. What rapper was shot in 1996, after attending a Mike Tyson fight in Las Vegas?

Tupac had gunshot wounds to his chest, pelvis, hand and thigh. One of the bullets punctured his lung, causing him to die six days after the shooting. As of October 2010, there have been no arrests made for the murder.
3. What was the name of the Puerto Rican rapper who died from a fatal heart attack in February 2000?

Big Punisher had always struggled with his weight, and when he passed away, he was at 698 pounds.
4. What DJ was fatally shot in the neck in 1987, while trying to diffuse a feud between his friends and other men?

Scott La Rock was the DJ with the group called Boogie Down Productions, which included rappers D-Nice and KRS-One. He was shot as he was leaving the Highbridge housing projects in South Bronx, New York.
5. What rapper, who was one of the founding members of a rap group that consisted of over 10 people, died from an accidental overdose in 2004?

Ol' Dirty Bastard, also known as ODB was one of the founding members of the rap group called Wu Tang Clan. The autopsy revealed he overdosed on cocaine and a prescription drug.
6. What 1980s rapper/vocal percussionist died from a fatal heart attack in 1995?

Buffy, also known as The Human Beat Box, was a member of the rap trio, The Fat Boys. He was one of the pioneers of a music form called beatboxing. Beatboxing is the art of making percussion sounds with your mouth. Another known pioneer of beat boxing is Doug E. Fresh (who is still alive).
7. Lisa Left Eye Lopes died from a fatal airplane crash in Honduras in 2002.

Lisa Left Eye was killed in a fatal automobile accident in 2002. R & B singer, Aaliya died in a fatal airplane crash in 2001. Although Left Eye was a rapper, she was a member of the R & B trio called TLC. Lisa made headlines in 1994 when she set fire to her boyfriend, Andre Rison's home.
8. Which rapper was shot to death in March of 1997, after leaving the Soul Train Music Awards afterparty?

Biggie Smalls was shot in the chest four times. The murder case has not been solved. There were rumors at athe time that this shooting was an act of retaliation for the Tupac Shakur shooting.
9. What is the name of the DJ who was murdered in a Queens NY recording studio in October 2002?

Jam Master Jay was the DJ for the 1980s rap duo, Run-D.M.C. Although authorities had a few suspects no one was charged for this murder.
10. Which New Orleans rapper was murdered in November 2003, right in front of his mother's home?

Soulja Slim was a rapper signed to the No Limit record label, founded by Master P. He was shot three times in the face, and once in the chest. An arrest has been made for this case.
Source: Author brooke26 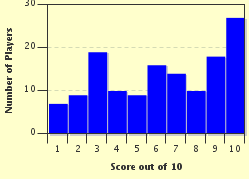 Related Quizzes
1. Excuse the Interruption Average
2. The Check Is In the Mail Easier
3. Famous Musicians Who Faced Cancer Very Easy
4. All Things Must Come To Pass 1 Average
5. Musicians No More Very Easy
6. The Train Has Left the Station Easier
7. The Days (and Ways) the Music Died Tough
8. Ouija, Ouija, Rock You Very Easy
9. Deaths At 27 Average
10. Rock N Roll Heaven Average
11. The Needle and the Damage Done Average
12. Girl Interrupted At Her Music Very Easy


Other Destinations
Explore Other Quizzes by brooke26