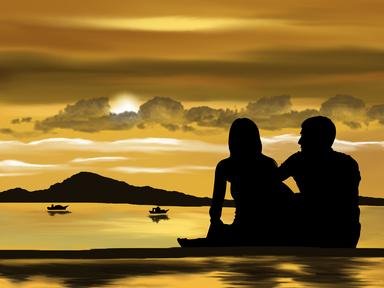 Celebrities seem to make a habit of marrying, divorcing and remarrying again in quick succession. But some celebrities never learn by their mistakes and remarry their ex-spouses. How much do you know about Tinsel town's star crossed lovers?

Quiz Answer Key and Fun Facts
1. Arguably the most famous remarriage in history: She is famous for her role as an Egyptian pharaoh and he as her lover. Who are these two stars who collided not once but twice?

Elizabeth Taylor and Richard Burton met on the set of "Cleopatra" (1963) and continued their onset romance offset. They first married in 1964. They divorced in 1974 but remarried in the following year. Their second marriage only lasted nine and a half months before they again split.

Taylor and Burton also starred in many other films together, including: "Who's afraid of Virginia Woolf" (1966) and "The Taming of the Shrew" (1967). Elizabeth Taylor was married eight times to seven husbands, while Burton was married five times to four wives.
2. Rapper Marshall Mathers (Eminem) married his wife in 1999 and remarried her in 2006. Who is she?

Eminem and Kim Scott met in high school in 1987, began dating in 1991 and married in 1999. Eminem filed for divorce in 2000 but the couple reconciled for the sake of their daughter. The following year Kim filed for divorce and they were locked in a custody battle over Hailie before the decree was granted. The couple remarried in 2006 but the second time around was no sweeter; they divorced a few months later.
3. She is an Oscar nominated and Golden Globe winning "Working Girl". He played a cop in two different television series. They originally met on the set of "The Harrad Experiment" (1973) where he co-starred with her mother. Who are they?

Melanie was 14 when she began dating don Johnson, who was 8 years her senior. They married in January 1976 but were divorced six months later. She reconnected with Don Johnson on the set of "Working Girl" where he persuaded her to have rehab for cocaine and alcohol abuse following her divorce from Steven Bauer.

They remarried shortly before their daughter Dakota was born in 1989. Six years later he succumbed to substance abuse and they divorced. Again. A trial reconciliation failed and Griffith married Antonio Bandaras in May 1996.
4. Actor-restaurateur Stephen Crane twice married this leading lady with a reputation as a femme fatale following her role in "The Postman Always Rings Twice" (1946). Who is she?

Lana Turner was born Julia Jean Mildred Frances Turner in 1921 and was signed to an MGM contract by the time she was sixteen. She and Stephen Crane married in 1942 but their marriage was annulled because his previous divorce was not finalised. They remarried to provide for their daughter Cheryl, however the union was over within months.

In 1958 Cheryl stabbed to death her mother's boyfriend Johnny Stompanato. It was deemed a justifiable homicide, as he was known to be abusive and jealous.
5. The late "Kid" McCoy was better known for his pugilistic career than his film roles. He also married Miss Julia Woodruff not once, not twice, but thrice in succession! What was "Kid" McCoy's real name?

Norman Selby began prize fighting when he was a teenager, using the name Charles "Kid" McCoy. Despite his considerable talent in the boxing ring where he won 81 of 105 recorded fights, he became known for using trickery to overcome his opponents. Accusations of the kid throwing a fight spawned the nickname "The Real McCoy" where people would wonder if they were seeing "Kid" McCoy pulling his punches.

Julia Woodruff was a hot tempered young actress when she married McCoy, and their marriages were fleeting. Only four years separate their final divorce from their first wedding. McCoy had roles in a few movies, with his best performance in "Broken Blossoms" in 1919.
6. This actor starred in a movie with his first wife's second husband. After marrying his second wife Jennifer Bogart in 1973, and again in 1978, he came up trumps playing Reuben Tishkoff in the "Ocean" trilogy. Who is this great actor?

Elliott Gould married Barbra Streisand in 1963 but they divorced in 1971 after a two-year separation. He starred in "Capricorn One" (1977) with Streisand's second husband James Brolin. Gould married Jennifer Bogart in 1973 but they divorced in 1976. Gould then had a relationship with actress Jennifer O'Neill following which he returned to and re-married Jennifer Bogart in 1978.
7. Fool me once shame on you. Fool me twice, shame on me. One star of the silver screen was married seven times to five different wives. Which Emmy and Grammy winning comedian, known for his roles in "Silver Streak" (1976), "Stir Crazy" (1980) and "Brewster's Millions" (1985), married Flynn Belaine and Jennifer Lee twice each between 1978 and 2001?

There have been many accusations that his marriages were characterised by violence, yet despite this, Jennifer Lee called him "An angel and a demon", and "the love of her life". Richard died from a cardiac arrest in 2005.
8. Which Hollywood actor, whose career spanned three decades and included roles in television's "Temperature's Rising" (early-mid 1970s) and the big screen's "The Shawshank Redemption" (1994) married Nancy Mygatt twice?

James Whitmore (born James Whitmore Jr.) began his acting career on Broadway but he was soon noticed by Hollywood and lured into movies and television. He received Oscar nominations for his work in "Battleground" and "Give 'Em Hell, Harry!" and was critically acclaimed for "Tora! Tora! Tora!" where he played Admiral Halsey. His last major movie role was that of Brooks Hatlen in "The Shawshank Redemption" alongside Tim Robbins and Morgan Freeman.

He was married to Nancy Mygatt for 24 years during which time they raised three sons. After his 7-year marriage to Audra Linley ended, he remarried Mygatt, but in true Hollywood style, the reunion didn't last.
9. Lawrence Zeiger, host of radio and television, married former "Playboy" bunny Arlene Akins twice. First in 1961 and again in 1967. What is his showbiz name, by which he is more widely known?

Larry King has hosted his own television talk show "Larry King Live" since 1985. His career began as a radio interviewer in Florida in the 1950s.
Larry married Alene Akins in 1961 and he adopted her son, Andy, but they divorced in 1963. Larry then married and promptly divorced Mickey Sutphen before remarrying Alene in 1967. During this reunion the couple had a daughter (Chaia) but split again in 1972.
10. This actress has gone by the names: Sarah Jane Mayfield, Jane Durrell, and Sarah Jane Fulks. She is an Oscar winning former wife of an American President and married her fourth husband, Fred Karger, twice. Who is this actress who graced the stage, screen and television for two decades?

After taking the name Jane Wyman, she starred in two movies with her future husband Ronald Reagan. He became her third husband in 1940, and they had two children. Another daughter died shortly after birth. Wyman married Hollywood music director and composer Frederick Karger in 1952 but they separated two years later, with the divorce being finalised in 1955. Six years later she remarried Karger, but Karger filed for divorce in 1965 saying she walked out on him.
Source: Author leith90 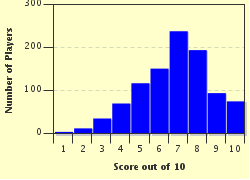