Okay, first of all, "Just The Facts, Ma'am" never appears in any episode of "Dragnet". However, the radio drama "Dragnet" made such an impact that it spawned the phrase, multiple TV series and movies, and several parodies, and who knows what else?

Bob Bailey was one of several actors who played Johnny Dollar in "Yours Truly, Johnny Dollar", another great Old Time Radio drama. Barney Phillips played Ed Jacobs, Friday's second partner. George Fenneman was the announcer on the show known for saying "Ladies and gentlemen: The story you are about to hear is true..."

Jack Webb was a veteran of radio drama, focusing primarily on private detective stories such as "Pat Novak for Hire" and "Jeff Regan, Investigator", but also doing some radio comedy and variety. In "Dragnet", he showed a clear penchant for deadpan delivery of very witty barbs and comebacks as he would apprehend a criminal.
2. What police agency did "Dragnet" center around?

Jack Webb played a forensic scientist in the 1948 film "He Walked by Night". The film was based on the murder of a police officer in Los Angeles, and a police sergeant, Marty Wynn, was the technical advisor on the film. Webb and Wynn began discussing the day-to-day activities of the police and how that could be portrayed, and soon Webb was accompanying Wynn in ride-alongs on patrol and attending classes at the LAPD police academy to learn the minutiae of the job. Once Webb felt he understood the day-to-day existence of the LAPD officer, he began to adapt actual cases, changing names, places, and other identifiable details, into the format that became "Dragnet".
3. What was Sergeant Friday's badge number?

The significance of the number 714 is reportedly simple: Jack Webb was a fan of the New York Yankees, and of Babe Ruth in particular. Ruth hit 714 home runs in his career, the major league record at the time of Dragnet.
4. Sergeant Friday's first partner died suddenly of a heart attack, as portrayed in the episode "Big Sorrow", aired December 27, 1951. What was his name?

"Big Sorrow" is probably the best tribute episode I have ever seen or heard of any program, with Friday trying to apprehend two escaped convicts with a new partner after being told that morning that his partner had died of a heart attack while making breakfast.

Joe Friday became the mentor to Ed Jacobs, played by Barney Phillips, and later, Frank Smith, played by Ben Alexander. Bill Gannon, played by Harry Morgan (Later Colonel Potter of M*A*S*H) was his partner in the 1967 Dragnet TV series.
5. What Christmas gift was the focal point of "Dragnet's" most controversial episode?

Like "A Christmas Story" 30 years later, ".22 Rifle for Christmas" would question the intelligence of giving a child a gun for Christmas. In ".22 Rifle", the child and his friend take the gun out and, unsupervised, one accidentally shoots the other, then hides while the victim dies.
6. Which of these "Dragnet" characters was a real person, as opposed to being a fictitious character?


Answer: All were real

Webb worked with the LAPD in researching "Dragnet", so he would often use real LAPD names in presenting the case. "Big Overtime", for example, begins:

"It was Tuesday, October 18, it was cloudy in Los Angeles. We were working the early morning watch out of homicide. My partner is Ben Romero. The boss is Thad Brown, Chief of Detectives. My name's Friday. I was on the way back from the stats office and it was 3:00 A.M. when I got to room 42, homicide."

One consequence of the use of real names was that people would sometimes call the actual offices of the LAPD and ask for Sergeant Friday. Reportedly, the switchboard operators would routinely answer that it was Friday's day off.
7. In the puritan 1950s, which of the following subjects were taboo as subjects in the radio episodes of "Dragnet"?

For the most part, "Dragnet" had few taboos. In portraying crime as it actually was, "Dragnet" pulled few punches. People were raped, children were murdered, drug crime happened in Los Angeles in 1950 just as it does today, and "Dragnet" addressed it.

One subject that was generally glossed over was racism, but that was true of the U.S. in general at that time. However, to Webb's credit, while "Dragnet" did not address this, Webb did address it vehemently in another series he had done, "One Out of Seven", in 1946.

There were also a couple cases that were considered too graphic for "Dragnet", but that Jack Webb still had a great deal of interest in. One example of that is the "Black Dahlia" murder, the case of Elizabeth Short, which remains unsolved as of 2007. In this and other cases, rather than portraying them with names changed and with the Joe Friday character investigating, Webb published a real-life summary of them in a book called "The Badge", published in 1958, and still very much worth reading today.
8. What division did Sergeant Friday work in?


Answer: It depended on the episode

Each episode started out explaining, in the second person (you as Sergeant Friday) what division was involved and the details of the case. For example, in "Big Seventeen", the introduction starts "You're a detective sergeant. You are assigned to juvenile bureau.

A series of crimes suddenly starts among teenage children in your city--robberies, burglaries, bodily assault. There doesn't seem to be any reason for it. The crime wave grows. Your job: stop it."
9. What one aspect is considered to be the primary difference between the way "Dragnet" portrayed police work versus all the other radio crime dramas at the time.


Answer: The cop was a working man, and police work was sometimes tedious

Old Time Radio cop shows in the 1940s and 1950s were dominated by shows like "Gangbusters" and "This is Your FBI", shows glorifying police work and showing simplistic portrayals of bad guys and the genius cops who always outsmarted them. The police were heroes, the criminals were villains, and the only people who disagreed with that were on the villains' side. Basically, Old Time Radio worked as police propaganda.

Considering that the LAPD cooperated and helped in the creation of "Dragnet", it is remarkable that this was not the case with "Dragnet". The police officer was a working man, first and foremost. In the office and on stakeout, police officers talked about the same things anyone else would--family, the weather, the upcoming weekend. Sometimes the job was boring. Sometimes the bad guy got away. Either way, you went back to the office, did your paperwork, and went home for the day.

The research done for "Dragnet" extended to the extreme bits of minutiae. For example, when you would hear footsteps as Friday walked from one LAPD office to another, the number of steps would approximate the actual distance between offices, and the phone rings would resemble the same types of phones used in the office.
10. "Dragnet" portrayed police-work on a daily basis, with no explanation of terminology, no attempts to make it easier for the listener. For example, when an "APB" was issued because of a "211", there was no explanation that an "APB" was an "All Points Bulletin" (or what an "All Points Bulletin" was), and a "211" was never defined as a robbery. What FOX-TV reality show that began airing in 1989 approaches police work in basically the same fashion, showing day-to-day police work with little explanation or narration?

"COPS" is to the 1990s and 2000s what "Dragnet" was to the 1950s and 1960s. While there are other reality shows such as "Real Stories of the Highway Patrol" or "Worlds Wildest Police Chases", they resemble more the propaganda shows like "Gangbusters" and "This is Your FBI" from the 1940s and 1950s.
Source: Author eauhomme 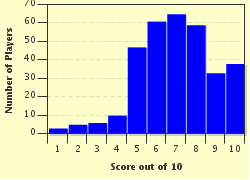 
Other Destinations
Explore Other Quizzes by eauhomme