I just read a great book called "The Mullet, Style of the Gods" by Mark Larson and Barney Hoskyns. How much do you know about this hideous (yet hideously popular) hairstyle?

Quiz Answer Key and Fun Facts
1. Which one of these ancient populations did not wear a hairstyle strikingly similar to the mullet?

Take another look at your history book! Who would have believed these ancient peoples embraced the long/short hairstyle? The Egyptian hairstyle was made with a wig but surprisingly mullet-like. The Assyrians combined facial hair and their mullets and used wigs and false beards to create their elaborate hairstyles.

The Persians' hairstyle was curly on top. It was also shorter and they did not use wigs.
2. How does Dictionary.com define a mullet?


Answer: A fish and a hairstyle.

The definition is: "(1) Any of various stout-bodied, edible fishes of the family Mugilidae, found worldwide in tropical and temperate coastal waters and some freshwater streams. (2) Hairstyle short on top and long in back," 1996, perhaps from mullet-head "stupid, dull person" (1857), also the name of a type of U.S. freshwater fish with a large, flat head (1866).

The term in ref. to the haircut seemed to emerge into pop culture with the Beastie Boys song "Mullet Head."
3. The first time a dictionary defined the word "mullet" as something to do with hair was in 1972.

Though the modern mullet was created in the early 1970s the first dictionary definition referring to hair appeared in 1932. At that time "mullet" was a verb meaning "to curl or dress hair". Imagine, there was a time when people said, "Madam, please mullet my hair."
4. What group recorded the song "Mullet Head"?

A sampling of the lyrics "Number one on the sides, don't touch the back, Number six on the top and don't cut it wack, Jack."
5. Which sub-style of the mullet is described as: "spiked on top but long in the back"?

It is "a glorious example of the outer borough Italian-American mullet" and is seen in New York and New Jersey (complete with gold neck chain) and also on the head of Mr. Mullet. Check him out at http://www.mulletmadness.com/mr-mullet.html
6. The following are alternate names for the mullet. Can you identify the group with the false name?

Though your lawnmower man may have a mullet, it is not currently a nickname for the hairstyle.
7. What famous general and conqueror brought the mullet into style, forever displacing elaborate wigs from fashion's formal attire?

After the French Revolution the new society embraced the Mullet with a fervor not seen again until the 1970s and 80s. The style caught on outside of France and was adopted by Romantic Poet Samuel Taylor Coleridge and United States general Horatio Gates.
8. What caused the mullet to fall out of fashion in the mid 1800's?

Men's high collars in the Victorian Era spelled doom for the mullet. From that time until the Beatles became popular in the early 1960s mens' hair remained uniformly short, with the exception of the pompadour in the 1950s.
9. What rock star is credited with wearing the first modern mullet?

David and Angie Bowie, along with Angie's hair stylist, Suzy Fossey created it one night. It was an instant hit.
10. Which magazine provided the inspiration for the first modern mullet?

The Mullet was actually inspired by three separate issues of "Vogue". An issue of French "Vogue" gave us the front while two different issues of German "Vogue" inspired the sides and back.
11. What publication was the first to use the word "mullet" in reference to the hairstyle?

The Beastie Boys print magazine was the first to use the term with an essay on mullets that was ahead of its time. The article was written by Casey Fahy and is does not appear to be available anywhere on the web. If you know of a link, I would love it if you would send it to me.
12. What 2001 movie is about "a janitor with a mullet hairdo, acid-washed jeans and a dream to find the parents he lost at the Grand Canyon..."?

David Spade in an ironic mullet. See www.IMDB.com for the review.
13. What classic 1960s film has the main character referring to another character as a "stupid mullet-head"?

This happens in the scene where Paul Newman gets his prison nickname, "Cool Hand". The word "mullet-head" was apparently a derogatory term in the United States as early as 1857. There is some confusion if the term was named after the fish or the fish was named after the term.
14. Which of the following people has never worn a mullet?

While Michael Bolton's and Billy Ray Cyrus' mullets are nearly legendary, most people forget that super hunk Brad Pitt had a mullet in the film "Thelma and Louise". In an interview with MulletMadness.com he attributes his success as an actor to his mullet haircut. Really! http://www.mulletmadness.com/mullet-news.php?cat=3
15. True or False: There are action figures called Mullet Heads.

The figures all sport fabulous mullets and come with biographical information about the characters including favorite band, favorite movie and favorite hotspot.
Source: Author colltrivia 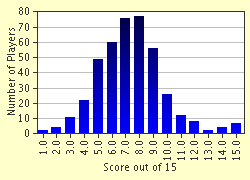 Related Quizzes
1. Hair Is My Business! Tough
2. Easy, Breezy, Beautiful Hair Tough
3. Hair Today Gone Tomorrow Average
4. All About Beards Average
5. Hairs to You! Easier
6. Moustaches, Moustaches, Moustaches! Average
7. "Stylin' and Profilin'" in Europa's Space Salon Average
8. Business in the Front, Party in the Back Average
9. No, My Head is Not on Fire: A Quiz on Redheads Average
10. Hairstyles Through the Ages Average
11. A Hair Raising Quiz Average
12. En Face; Beards and Their History Average


Other Destinations
Explore Other Quizzes by colltrivia