The Wonderful World of Fibber McGee and Molly Quiz

It's time now for Fibber McGee and Molly! For twenty years this old time radio program brought laughter into the homes of countless Americans. Let's see how well you know this great old show.

Quiz Answer Key and Fun Facts
1. For the duration of the show Fibber McGee and Molly lived on Wistful Vista. What was the street number of their house?

Wistful Vista was the kind of place everybody wished they lived in during the years of the Great Depression. Friends were always present, no trouble ever lasted too long, and nobody went hungry. Many people today probably wish it were a real place too!
2. The husband and wife characters of Fibber and Molly McGee were played by Jim Jordan and Marian Driscoll. Were these two married in real life?

Jim and Marian both hailed from Peoria, Illinois where they met in church. The two were married in 1918. They remained married for forty-three years until Marian's death of cancer in 1961.
3. This company was the sponsor of Fibber and Molly's show from 1935 until 1950. What was its name?

In the modern era of having many, many commercials during the average radio program it's hard to imagine only having one sponsor per show. In every show, announcer Harlow Wilcox would inevitably show up to pitch Johnson products such as Johnson's Self-Polishing Glo-Coat.

After a while, Fibber took to referring to Harlow as "Waxy" because of his professed love for all things related to Johnson's Wax.
4. A running gag in the show is a place stuffed with junk that often causes a great deal of ruckus and noisy sound effects. What was this place that caused such hubbub?

The closet first showed up in an March 5, 1940 episode titled (fittingly enough) "Cleaning the Closet". It then became a running gag with Fibber muttering "gonna clean that closet one of these days" after each avalanche of junk upon opening the door. In fact, the real closet was sound effects performed by Ed Ludes and Virgil Rhymer.
5. In addition to playing Molly, Marian Driscoll also voiced this recurring character on the show. What was her name?

The character "Teeny" (also referred to sometimes as "Little Girl" and "Sis") was a precocious girl from the neighborhood who spent a lot of time trying to get spare change from Fibber. To avoid complicated character switching "Molly" rarely interacted with "Teeny." Usually she'd excuse herself to go upstairs right before Teeny made her entrance.
6. This character from Fibber McGee and Molly went on to have his own spin-off radio show. What was his name?

The Great Gildersleeve show began in 1941 with Gildersleeve's character moving to the town of Summerfield. Harold Peary starred in the radio show which lasted until 1957. The story even made a brief jump to television with a 39 episode run in 1955.
7. Although many different musical groups made their way through the show the best known orchestra took over in 1938. What is the name of this group that provided instrumental music each episode?


Answer: Billy Mills and the Orchestra

Although The Kings Men provided the vocal musical entertainment, it was the Billy Mills Orchestra that filled in the spaces with instrumental fare. Amazingly, the Orchestra performed more than a total of 10,000 radio broadcasts. Leader Billy Mills also wrote a number of hit songs including "I Sang A Song" and "Wing to Wing".
8. In addition to radio, Fibber and Molly also hit the big screen in the movies "Here We Go Again" (1942), and "Heavenly Days" (1944). What other radio comedy "team" co-starred in these films?

In the films, Jerry Maren (better known as for his role as the Cowardly Lion in "The Wizard of Oz") took on the body double role of the dummy Charlie McCarthy for the scenes where McCarthy appeared to move around. Harold Peary, Arthur Q. Bryan, Bill Thompson, Harlow Wilcox, Gale Gordon, and Isabel Randolph also appeared in the films reprising their radio roles.

These films were later released on video and featured on the Turner Classic Movies channel.
9. "Fibber McGee and Molly" was never inducted into the Radio Hall of Fame.

The show was inducted into the Radio Hall of Fame in 1989. Tragically, Jim Jordan (McGee) died the year before. Also inducted that year were Don McNeill's Breakfast Club, Jack Armstrong, and The Shadow.
10. One of Bill Thompson's more popular characters on the show was The Old-Timer. What was his constant catch phrase before launching into a joke?

This catch phrase would be followed by the words "The way I heared it one fellows say to t'other fellow 'saaaaaay,' he says" and then some humorous exchange. In addition to the Old-Timer's jokes his shtick involved pretending to be hard of hearing and then interrupting the speaker when they attempted to repeat themselves. As a running gag, he also refuses to tell anyone his real name
Source: Author darrellcdow 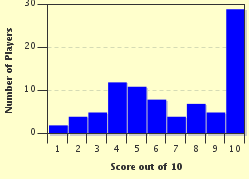 
Other Destinations
Explore Other Quizzes by darrellcdow