Before television, radio was the prime entertainment medium in homes. Born in 1940, I grew up with these radio shows. How many can you identify?

Quiz Answer Key and Fun Facts
1. Which fictional detective was an "enemy to those who make him an enemy, friend to those who have no friend"?

Boston Blackie was created by Jack Boyle and appeared in a series of short stories as a safe cracker and jewel thief. In radio, television, and film appearances, Boston Blackie has reformed and become a detective. The radio program ran from 1944 to 1950 with more than 200 episodes.
2. Which radio series began at "the crossroads of a million private lives, a gigantic stage on which are played out a thousand dramas daily"?

"Grand Central Station" was on the radio from 1937 until 1954, a very long run. Every episode presented a different story, each of which involved a person (or persons) who had some connection to Grand Central Station (in most of the episodes, the steam engine of a train as heard). The tales were quite varied, including comedies of various types, romances, and dramas.
3. This comedy was an early radio spin-off from the comedy "Fibber McGee And Molly." After a few episodes, the title character became the Water Commissioner of the town of Summerfield. Which show was it?

Throckmorton P. Gildersleeve, with significant assistance from Birdie Lee Coggins (his cook and housekeeper) administers the estate of his deceased brother-in-law and raises Marjorie and Leroy Forrester, his orphaned niece and nephew. Other characters included Judge Horace Hooker, barber Floyd Munson, and pharmacist Richard Q. Peavey.
4. In times of crisis, the rancher Steve Adams assumes his secret identity to combat evil. Which of these is his alter ego?

In the western adventure "Straight Arrow", Adams assumes the identity of Straight Arrow, a Comanche Indian. As a Comanche orphan, Adams was raised by the Adams family who owned the ranch and who later willed it to him. The show ran from 1948/49-1951, usually twice a week. The 292 episodes were sponsored by Nabisco Shredded Wheat.
5. This radio series featured in each episode an incident in the life of a person who had served as President of the United States. What was its title?

"Mr. President" was aired on ABC from 1947-1953. In each episode, the script prevented revealing the identity of the President until the very end of the program, allowing the listeners to speculate on whom the story concerned. Edward Arnold played the President in each episode.
6. This radio drama centered on the daily newspaper "The Illustrated Press" and its employees. Which show was it?

Gosden and Correll created and wrote "Amos 'n' Andy", about two black men, Amos Jones and Andy Brown, who move from a farm in Georgia where they work to Chicago to find a better life. They start the Fresh Air Taxi Company and join the Mystic Knights of The Sea, a lodge headed by George "the Kingfish" Stevens. Amos is naive and hard-working, Andy is overconfident and is happy to let Amos do most of the work, and the Kingfish tries to get both involved in dubious money-making schemes. Correll and Gosden were both white.
8. Which radio drama was subtitled "radio's outstanding theater of thrills"?

"Suspense" aired from 1942-1962 on CBS. In most of the 946 episodes, an ordinary person ends up in a bizarre and dangerous situation and does not escape until the last moment. Among writers for the show were John Dickson Carr, Hugh Pentecost, Lucille Fletcher, and Walter Newman. Alfred Hitchcock directed the initial show. Those playing roles included Agnes Moorehead, Orson Welles, Henry Fonda, Judy Garland, Lena Horne, and Cary Grant.
9. This very popular crime drama was derived and took its name from a book by Lewis Collins. It is remembered for opening with a chant of "L-A-V-A, L-A-V-A" and the March from "The Love For Three Oranges" by Prokofiev. Which show was it?


Answer: The FBI In Peace And War

"The FBI In Peace And War" (from "The FBI In Peace And War" by Collins) presented various stories involving FBI agents fighting crime and preserving democracy . The cast starred Martin Blaine and Donald Briggs as FBI agents. The show ran from 1944-1958. Although it eventually had other sponsors, Lava Soap was its initial one (from which, of course, the chant came).
10. The "Lone Ranger" ran for 2,956 radio episodes, ending in 1954. What year was the first episode broadcast?

The story of John Reid, the Lone Ranger, and his companion Tonto, has entered American folklore. "The Masked Man," silver bullets, the horses Silver and Scout, and the phrase Kemo Sabe have been immortalized on radio and television, in films, comic books, and comic strips, in novels and video games, and in toys.
Source: Author lowtechmaster 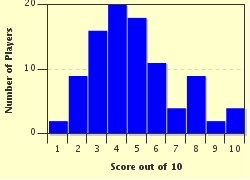