How much do you remember about the good old days of old time radio?

Quiz Answer Key and Fun Facts
1. What was the true identity of 'The Shadow'?

2. Who was the only person who knew the Shadow's identity?

3. How were the Lone Ranger and the Green Hornet connected?


Answer: The both had the same last name and were related.

The Lone Ranger was the Green Hornet's great-uncle. Dan Reid, nephew of John Reid (Lone Ranger) was Britt Reid's (Green Hornet) father.
4. What radio show was a spin-off of 'Fibber McGee and Molly'?

This show started the trend of series spinoffs.
5. What was the only sponser of the show 'Let's Pretend'?

6. What was the Great Gildersleeve's first name?

7. What type of show was 'Live Like a Millionaire' on radio?

People performed in a talent show for prizes and the chance to live like a millionaire for a week.
8. What kind of car did Jack Benny drive on his radio show?

Mel Blanc did the sound of the wheezing old car.
9. In the program 'The Cinnamon Bear', who stole the Christmas tree's Silver Star?

There were 26 fifteen minute programs of 'The Cinnamon Bear' which was repeated in many places every year between Thanksgiving and Christmas.
10. Who played the role of Walter Denton in the 'Our Miss Brooks' program? 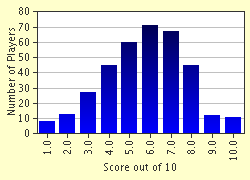 
Other Destinations
Explore Other Quizzes by lkauke