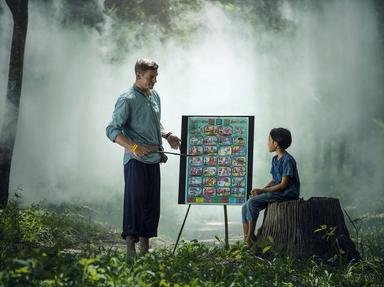 Do You Want to Write a Limerick? Quiz

A limerick is a special kind of poem. In this quiz we will look at the rules for writing one. If you already write limericks, why not come and test how much you know?

Quiz Answer Key and Fun Facts
1. How many lines should a limerick have?

"The answer's not 8 or 14,
For 5's the solution you've seen.
Why this should be so
I really don't know
Except that it always has been."

There's another kind of poem called a sonnet which has 14 lines.
2. Is there a particular something that you have to write your limerick about?


Answer: You can write about anything that you like

There are no rules about what to write about. Use your imagination. The best limericks are often the silliest ones.
3. The first line of a limerick should usually have 8 or 9 syllables. Which of these do you think would be suitable to start your limerick?


Answer: FunTrivia helps me a lot

A syllable is a unit of a word normally consisting of one sound. If you count out the number of syllables in each of the answers you will find that, "FunTrivia helps me a lot" (8 syllables) is the only one that works.

The first line can also say anything you want. People often start limericks, "There once was a ..." or "There was a ..." but you don't have to if you don't want to.
4. You choose, "I thought that I saw a gazelle" as the first line of your limerick. What do you think would be a suitable second line?


Answer: I saw a gorilla as well

The second line has to rhyme with the first and follow the same rules about the number of syllables. "I saw a gorilla as well" (8 syllables) is the only one of the options to do this.
5. The third line of a limerick should have either 5 or 6 syllables. Which of these do you think would be suitable?


Answer: When I asked her to stay

By now you should be getting pretty good at counting syllables. "When I asked her to stay" has 6 syllables.

"The cat stared back" (4 syllables), "I wandered lonely as a cloud" (8 syllables) and "Pineapples are my favourite food" (9 syllables) don't have the right number.
6. Suppose that you've written three lines of your limerick and it looks like this: "I thought that I saw a gazelle It smelled of a really bad smell I gave it to Terry" Why would "Who blew a raspberry" be a good choice for the fourth line?

That's right. The fourth line should follow the same rule as the third and should rhyme with it. If you can be funny or silly at the same time, so much the better!
7. All you need now is a final line with which to finish your limerick. So far you've got: "I thought that I saw a gazelle It smelled of a really bad smell I gave it to Terry Who blew a raspberry" Which of these do you think would best make a suitable ending?


Answer: And pulled all my quizzes as well

The final line should match the first two lines. Here it has 8 syllables just like lines 1 and 2 and well rhymes with gazelle and smell.

All is sometimes used in poems to rhyme with gazelle or smell but this is not the best option because it isn't a perfect rhyme.


Answer: I'm going to bake up some dough

Rhyming can be tough if you struggle with English because many words are not pronounced as you think they would be. English has to be one of the world's worst languages for not following its own rules!

Dough, thorough and enough are all pronounced differently and dough is the only one of these to rhyme with grow.
9. The rhythm of each line is also important. If you read your limerick out loud, which of these activities will best help you see if the rhythm sounds right?

See how it sounds as you clap out the beats. Dancing does have a rhythm but you'll find it almost impossible to read your limerick properly and dance at the same time!
10. A famous author called Edward Lear was responsible for writing the first limericks. Can you tell me when Limerick Day is celebrated each year if I tell you that it's on the same day as his birthday? Here's a limerick that might help you (keep in mind that Mr Lear lived in England). "There once was a Poet called Lear Whose birthday came round every year. It fell in the Spring And above anything He liked presents from friends far and near."

The answer was May 12th because it's the only one of the choices in the spring.

Edward Lear lived between 1812 and 1888 and here is one of his limericks.
"There was an Old Man in a tree,
Who was horribly bored by a bee;
When they said, "Does it buzz?"
He replied, "Yes, it does!"
"It's a regular brute of a bee!"
Source: Author glendathecat 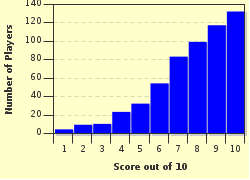