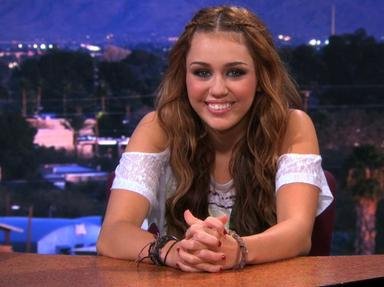 10 Questions about Hannah Montana | For Children

This quiz is about "Hannah Montana", the TV show.

Quiz Answer Key and Fun Facts
1. What does Miley call her grandma?

Miley's grandmother is from Tennessee, and she comes down sometimes for volleyball matches and Hannah Montana events. Mamaw is not very fond of Miley's godmother Dolly Parton.
2. What is Miley's cousin named?

Luann and Miley are identical cousins. It was revealed that Luann took over for Miley in a pageant when they were little, when Miley got nervous.
3. What's is Oliver's alter ego's name?

Mike Stanley was formed when Oliver got really jealous that Lilly always get to go to everything while he just got to hear about it. Oliver's alter ego's name was formed when he was rushed to say his name before he got to think of one, and saw a mic stand.
4. Which singer did Hannah Montana date just because of the duet they were doing together?

Hannah dated Austin Rain just because of duet they were doing together. Hannah and Austin had a very public break up on the Colin Lasseter show to show Jackson that it's wrong to cheat or lie.
5. Who wanted to become best friends with Miley after the press found out Miley was dating Jake Ryan?

Amber and Ashley were both lying to each other in order to become best friends with Miley. Amber was going "to the mall" while Ashley was going to "get a manicure"
6. Who hates Hannah more than anything?

Mikayla hates Hannah more than anything because "Her music is stupid, her voice is stingy, and she wants to throw up all over her clothes but it looks like somebody already did." Hannah is not fond of Mikayla at all, they talk meanly about each other all the time.
7. What was Jake Ryan's big secret that he told Miley?


Answer: His first name is Leslie

Jake Ryan wanted to be extremely honest with her so he told her his biggest secret which was his real name is Leslie, which just made Miley feel even worse because she wasn't being honest with him. So, the next day Miley told Jake Ryan her biggest secret that she was Hannah Montana!
8. Where are the Stewarts from?

Miley Cyrus is actually from Tennessee. That's where they shot the movie, less than ten miles from the Cyrus family home.
9. What did Jake Ryan dress up as to get Miley to date him again?

Jake Ryan dressed up as a knight to show Miley that he could be her knight in shining armor. It didn't exactly work but, they did end up dating after he goes to a movie premiere with another girl and accidentally says Miley instead of his date's name, Melissa.
10. What color is Jackson's car?

We got to see Jackson's car in one of the very first episodes. Jackson was pretty convinced that it was a girl car but in the end Robbie Ray tricked it out so that it was a man car.
Source: Author Sammy789 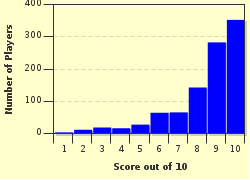 Everything from geography to sports to singers and books that happen to share a name with the state.


Other Destinations
Explore Other Quizzes by Sammy789