Nevada has a wide variety of wildlife since it contains many different environmental types. So put on some sunscreen and pack plenty of water, and prepare to venture out into the Great Basin!

The desert bighorn sheep was made Nevada's state animal in 1973. It has existed in Nevada for more than 11,000 years. While the species was endangered for many years, numbers have rebounded and there are numerous herds, particularly in central Nevada.
2. This animal exists in large numbers everywhere in Nevada. It equally at ease roaming cities and open areas. They can jump over tall fences and are known for their mournful howls at night. This animal is the most abundant livestock predator in western North America, causing the majority of sheep and goat losses due to predators.

The coyote eats mainly small rodents buy can take down a deer. They can run up to 40 miles per hour and jump over an 8' fence.
3. One of the largest pure predators in Nevada, it ranges throughout Nevada. Their home range can extend for more than a hundred miles. Its scientific name is "Felis concolor" which means "cat of one color." What animal is it?

Mountain lions in Nevada are usually tawny or tan to reddish in color with black-tipped ears and tail. Mountain lions vary in size and weight, with males being larger than females. Adult males may be more than eight feet in length and average 140 pounds. Adult females may be up to seven feet long and weigh an average of 100 pounds.
4. The jackalope is a native species of Nevada.

No, there is no such animal. It is a legendary animal that supposedly was a cross between a jackrabbit and antelope. This fanciful animal is a rabbit with horns on it. The story of the jackalope first appeared in the New York Times in 1932. It is used to humor tourists much like snipe hunts!
5. What is the only type of bear known to exist within Nevada's borders today?

The black bear population is limited to the western part of the state, primarily in the Sierra Nevada mountains and to the east to the Pine Nut mountains. Only about 400 bears are left in Nevada and recent forest fires have devastated a significant portion of their habitat.
6. This typically all white animal is normally spotted climbing around rocky mountain slopes, easily jumping from ledge to ledge.

The mountain goat is a beautiful animal. Its thick and shaggy white coat is easily recognizable on the mountain side. It ranges on many of the mountain ranges in the state but the largest herds exist in the Ruby Mountains of Elko County in the northeastern part of the state.
7. In 1999, one of these animals harvested was the largest ever taken in Nevada and the second largest ever found in the United States during the 20th century.

The animal scored 425 points and was taken on Table Mountain in the Monitor Range of Nye County, north of Tonopah.
8. The first case of the dreaded hantavirus occured in Nevada. Fortunately, the man survived but many others haven't been so lucky. The rodent primarily responsible for the spread of the disease in Nevada is the ______ mouse.

The disease is spread through mouse droppings. When the droppings are disturbed, the virus gets inhaled with the dust. It is wise to wear a protective mask at all times when working around any mouse droppings.
9. This is one of the meanest and toughest animals not only in Wisconsin but also in Nevada.

Easily recognized by the white stripe that starts at the top of its nose, the badger is well-known as an animal to steer clear of. They have been known to fight off coyotes, wolves, and even bears!
10. The jackrabbit is a rabbit.

The jackrabbit is actually a hare. They were originally named "jack ass rabbits" because of their long ears but was later shortened to jackrabbit. Jackrabbits can run as fast as 40 miles per hour and leap ten feet, which comes in handy since they are a favorite snack for a number of predators, especially the coyote.
Source: Author ghosttowner 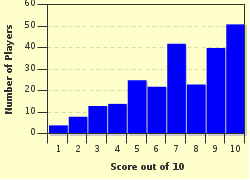 Everything from geography to sports to singers and books that happen to share a name with the state.


Other Destinations
Explore Other Quizzes by ghosttowner