Wormtail milks Nagini to feed Voldemort. Voldemort can talk to Nagini because he is a Parselmouth.
2. Who is the headteacher of Durmstrang school?

Professor Karkaroff was a death eater. He fled when he felt the Dark Mark burn on his arm near the end of the book.
3. There were four champions taking part in the Triwizard Tournament.

Although there is usually only three, someone entered Harry under another school confusing the goblet into picking four champions. The four champions were Fleur Delacour from Beauxbatons, Viktor Krum from Durmstrang, Cedric Diggory from Hogwarts and Harry Potter from Hogwarts.
4. Who was the first champion to find out that they were facing dragons in the first task?

Hagrid found out about the dragons and showed them to both Harry and Madame Maxime. Madame Maxime told Fleur because she wanted her school to have the advantage. She didn't know Harry was there too because he was under the invisibility cloak. On Harry's way back to the castle he saw Karkaroff heading towards the dragons and assumed that he would tell Krum so he passed the information on to Cedric so everyone would know what they were facing, and there was no advantage.
5. How did Harry describe Hermione when he saw her with Krum? (before he realised who she was)

"Krum was at the front of the party, accompanied by a pretty girl in blue robes that Harry didn't know." It wasn't until later, when he saw her up close, that he realised it was actually Hermione.
6. What was the password to get into the prefects' bathroom?

Cedric told Harry that to find out what the second task was he had to open the egg underwater. He told Harry the password into the prefects' bathroom so he could open it in peace.
7. Who did Krum have to rescue from the merpeople?

Krum had to rescue Hermione, Harry had to rescue Ron, Cedric had to rescue Cho and Fleur had to rescue her sister Gabrielle. Although Harry was the first down into the cave he was the last back because he stayed to make sure all the captives were rescued. When Fleur never appeared he took Gabrielle as well as Ron.
8. Which Death Eater did Karkaroff mention in the courtroom that they didn't already know about?

Harry saw him in the courtroom in the pensieve, when he was giving up Death Eaters names in the hope he would be released from Azkaban. He mentioned Dolohov, Rosier, Travers and Mulciber who had already been caught or killed. When he mentioned Augustus Rookwood the crowd were surprised, they obviously hadn't known about him.

He also mentioned Snape's name. This is how Harry found out that he had been a Death Eater.
9. Harry faced a Dementor in the Maze during the third task.

Harry did think that there was a dementor in the maze but he realised that it was a Boggart. It turned into a Dementor around Harry because it is what he fears most.
10. What did Voldemort need from Harry to become whole again?

The spell called for: bone of the father, unknowingly given, flesh of a servent, willingly given and blood of an enemy, forcibly taken. Voldemort chose Harry's blood because it would pass the protection Harry got from his mother onto Voldemort.
Source: Author cassandra moran 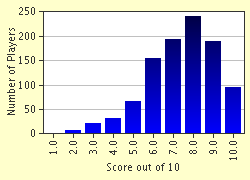 
Other Destinations
Explore Other Quizzes by cassandra moran