Harry Potter and the Goblet of Fire Quiz

This quiz is on the book by J.K Rowling and it is the first team quiz by scorpitaurius. Hope you enjoy it (don't take it if you haven't read the book).

Quiz Answer Key and Fun Facts
1. What is the Triwizard Tournament?

The Triwizard Tournament is a dangerous game (though interesting) in which the three magic schools do dangerous tasks, and the one who wins the third and final task wins the tournament to get 1000 galleons as a reward. Harry wins the tournament, but gives the money to Fred and George to help them open a joke shop along with Lee Jordan.

Written by ananshenoy
2. Who is the Death Eater who became the Headmaster of Durmstrang School after Voldemort lost his power?

Igor Karkaroff was a Death Eater before he became the headmaster. He favors Viktor Krum because he is probably the only famous student in the school, and is very proud of him. Igor Karkaroff also runs away from Hogwarts because he is frightened of Lord Voldemort. He keeps telling Severus Snape that his Dark Mark is getting clearer day by day because of Voldemort.

By ananshenoy and giti78
3. What was the only thing Madame Maxime's horses drank?

When Dumbledore asked Madame Maxime whether she wanted her horses to be given some hay and water, she said that her horses only drank single-malt whiskey. The horses were also unnaturally large, probably so that they could carry the voluptuous Madame Maxime, who also happened to be a half giant.

By ananshenoy
4. What are Voldemort's followers called?

Some of Voldemort's most faithful followers are Peter Pettigrew, Barty Crouch Jr and Bellatrix Lestrange. Voldemort also burns the Dark Mark on the skin of his Death Eaters. The Death Eaters are mostly very frightened of Voldemort and always try to run away.

By giti78
5. Where did Harry get hurt when he was trying to get the golden egg from the dragon's nest during the first task of the Triwizard Tournament?


Answer: on his shoulder

Harry was supposed to get the golden egg from the dragon (Hungarian Horntail). In this attempt he got hurt on his shoulder. After he got hurt, he went to the hospital wing to get himself treated. Harry was fine after a day or two and went ahead for the second task.

By dobby_harry35
6. When did Harry and Ron become friends again after their fight?


Answer: After the first task

Ron was not Harry's friend until after the the first task, as he was angry with Harry because he thought that Harry had put his own name in the Goblet of Fire without even confiding in Ron who was his best friend. After the first task, Ron understood that Harry really did not know what he was doing and had not put in his name in the goblet voluntarily.

By giti78 and ananshenoy
7. Who dies at the end of the book?

After the Third Task when Harry and Cedric hold the trophy together, they are both transported to a graveyard, the graveyard in which Voldemort's father was buried and where Peter Pettigrew killed Cedric with the Avada Kedavra spell. Harry uses the cup again to transport himself and the body of Cedric back to Hogwart's after a narrow escape from Voldemort.

By giti78
8. Who was the person who put Harry's name in the Goblet of Fire?

Bartemius 'Barty' Crouch Junior, who wanted to kill Harry, had put his name in the goblet and had disguised himself as Alastor Moody. He helped Harry get through all the tasks so that when he touched the Triwizard Cup he would fall into the graveyard where Voldemort was plotting to kill him.

By ananshenoy
9. Who is the Durmstrang champion?

Viktor Krum is the Bulgarian team seeker and is the smallest Quidditch player ever to play in the World Cup. He kind of likes Hermione and wants to propose to her too. He also takes part in the Triwizard Tournament and is forced to attack Fleur Delacour under the influence of the Imperius Curse.

By dobby_harry35
10. Which of these methods did Sirius use to contact Harry inside Hogwarts during the school year?

Sirius actually did fly on Buckbeak and turn into a dog, but not inside Hogwarts. He met Harry at Hogsmeade disguised as a dog. As for apparating or dissaparating inside Hogwarts, nobody except Dumbledore has been known to do that because the school is covered with charms that keep it protected from all outsiders, as Hermione always explains to the other students who never seem to remember.

By ananshenoy
11. From which school is Fleur Delacour?

By giti78, ananshenoy and dobby_harry
12. Who played the main role in bringing Voldemort back to power?

Peter Pettigrew, who played the main role in bringing Voldemort back to power, was also James's (Harry's father's) friend when he was in his school years. He was the only death eater from Gryffindor house and later died, killed by the very hand Voldemort gave him when he cut off his own.

By giti78 and ananshenoy
13. Which foul creatures guard the wizard prison, Azkaban?

Dementors (sometimes) suck the souls out from the bodies of people they find. They also have the power to suck the happiness out of the one standing (or sitting) near them. There are spells to defeat them, though, like the 'Expecto Patronum' spell which Harry learns in the third book (movie) from Professor Lupin.

By ananshenoy
14. With whom does Harry dance in the Yule Ball?

Harry danced with Parvati Patil, unwillingly, as he wanted to dance with Cho Chang who was already dancing with Cedric Diggory. While Harry went to the ball with Parvati, Ron went with Padma Patil, Parvati's twin sister. The two sisters are from India and wear traditional Indian dresses to the Yule Ball.

By dobby_harry35
15. After which task does Voldemort come back to power?

Voldemort needed three things to get back to power: his father's bone, his servant's hand, and his enemy's blood. His father was dead and he got his bone from the graveyard; Peter Pettigrew gave his hand; and Peter made a cut in Harry's hand to extract his blood.

By ananshenoy
16. Harry sees the ghosts/echoes of the last people Voldemort killed.

Harry is severely injured at the end of the Triwizard Tournament, and is forced to a duel with Voldemort. His and Voldemort's wands are bound because they have the core of a phoenix feather from the same phoenix. Harry sees the spirits of all the people Voldemort's wand has killed. They help him to get away with the help of the portkey.

By ananshenoy
17. What is Harry's godfather's name?

Harry's Godfather, Sirius Black, was considered to be a criminal but was actually innocent and had not done a thing. Peter Pettigrew, who was the actual criminal, had just blamed it all over Sirius. Even Harry had believed this rumor until the third book (movie) where he got to know the truth about Sirius.

By giti78
18. Who pretends to be Alastor Moody?

Barty Crouch Jr has the name of his father but, unlike him ,is a Death Eater and one of Voldemort's ardent followers. He is found to be the one who put Harry's name in the goblet to get Harry killed by his master, Voldemort. After getting caught, his soul is sucked out of his body and he is thrown in prison for the crime he did.

By giti78
19. Harry found how to listen to the egg from whom?

Myrtle, mostly called Moaning Myrtle due to her melodramatic behavior like crying and moaning almost all the time, probably liked Harry more than the others for some reason. She told Harry about how to hear the egg and told him that Cedric had also come to take a bath, and he took lots of time to figure out the clue, unlike Harry. The clue was supposed to be found by putting the egg underwater and listening to what it said. Harry was told to go to the prefects' bathroom by Cedric, because Harry had helped him before.


Answer: a navigation through a maze at the end of which was the cup

The third task was to find the cup in the middle of a maze. Harry had managed to finish the maze, but when he touched the trophy (which was actually a portkey) he reached a graveyard where Voldemort was waiting for him. In the journey to the center he also heard loud screams from Fleur Delacour who was being tortured by Krum. In this incident, Krum was innocent because he was being controlled by someone to torture Fleur. 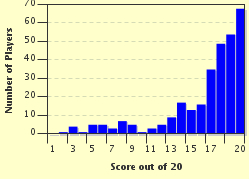 
Other Destinations
Explore Other Quizzes by ananshenoy