Hello! This is a quiz about the first half of "Harry Potter and the Goblet of Fire". I hope you enjoy the quiz! Good luck! It is mostly very easy!

Quiz Answer Key and Fun Facts
1. What did the maid say the Riddles were wearing when she found them dead?


Answer: "still in their dinner things!"

The maid was the first to discover the family dead. She said - "Lying there with their eyes wide open! Cold as ice! Still in their dinner things!"
Scary children's book!
2. What department of the Ministry Of Magic does Mr Weasley work for?

Mr Weasley is fasinated by muggles (non magical people).
He has a large collection of plugs and batteries! And I thought my dad was odd!
3. How long has it been since Britain hosted the Quidditch World Cup?

Mrs Weasley told Uncle Vernon this in the letter she wrote him asking if Harry could attend with them. She said it was a once in a life time opportunity and that the tickets were extremely hard to come by. Mr Weasley managed to get prime tickets through his connections at the Department of Magical Games and Sports.
4. In what order did the Weasleys appear in the Dursley's boarded up fire place?

Cauldron leakages have been increasing at a rate of about 3% a year!
Percy told us this when he was explaining that he was writing a report for the Department of International Magical Co-operation. He says the foreign imports are "a shade too thin".
6. What is Cedric Diggory's father's first name?

Amos - Amos Diggory.
He is said to be a ruddy faced wizard with a scrubby brown beard.
He loves to crow about Cedric's victory over Harry in catching the Golden Snitch the previous year. Cedric explains to his father that Harry fell off due to the Dementors.
7. What item of clothing was Archie wearing?

A Ministry wizard was trying to get him to wear a pair of pinstriped pants. Archie claimed that he likes "..a healthy breeze round his privates, thanks".
8. What was the name of the broom that was advertised at the World Cup?

The Bluebottle is a broom for the whole family. It claims that it is safe and reliable with an in-built Anti Burglar Buzzer.

So hurry everyone and trade that family car of yours for the Bluebottle broom!
9. What would you say if you wanted to conjure the Dark Mark?

Don't try this at home kiddies!
The Dark Mark looks like emerald stars making the formation of a skull with a serpent protruding from its mouth like a tongue.
10. What is the name of the reporter we meet from the Daily Prophet?

Rita loves nothing more then getting a scoop. It doesn't matter if its 100% true or not! Rita is an unregistered animagus! She can transfigure into a beetle. This is how she has been getting stories from the school while she was banned from entering the school grounds!
Hermione figured it out and has Rita in a jar.
11. What school did Draco Malfoy's father almost send Draco to?

Draco's father knows the headmaster of Durmstang. Apparently he doesn't allow people of non magical parents into the school. The school is said to put a lot of emphasis on the Dark Arts.
12. What happened to little Dennis Creevey on his way across the lake with Hagrid?


Answer: He fell in the lake!

Dennis and Colin are so cute! He was so excited about falling in the lake.
13. What, according to Professor Trelawney, planet was in a position of power when Harry was born?

She believes this because of Harry's dark hair, mean stature and his losses early in life. She then guesses Harry was born in mid-winter.
She was wrong he was born in July!
14. What phrase does Mad Eye Moody keep repeating?

Mad Eye Moody sure does practice constant vigilance! He is well known for acting before assessing the danger. He thinks things are out to get him all the time.
15. The book that Neville was reading that Mad Eye Moody lent him was called "Magical Animals and Their Properties"?

It was actually called "Magical Mediterranean Water-Plants and Their Properties". He said that he lent it to Neville because he was good at Herbology and to take his mind off the tragedy of his parents. However we later learn that Moody gave him the book so Harry would know to use Gillyweed in the lake test.
16. True or False: You can't apparate in the school grounds.

Hermione keeps telling Ron and Harry that it is impossible to apparate in the school grounds or the school but they don't seem to be able to let it sink in. 0:-)
17. What are the names of the Beauxbaton and Durmstrang Professors who come to Hogwarts?

Madame Maxime is from Beauxbaton. She is half giantess although she doesn't want to admit it.
Professor Karkaroff is from Durmstrang. At the end of the book Karkaroff flees because he fears for his life after betraying Voldemort. Karkaroff was once a Death Eater.
18. What does the Professor from Beauxbaton keep calling Professor Dumbledore?

Very cute. 0:-)
19. True or False: Hermione is very jealous of the attention Harry gets and thought that he put his own name in the Goblet of Fire?

No, it's Ron who is jealous of all the attention Harry gets. It can't be easy for Ron being the best friend of a famous wizard, being one of seven children and coming from a poor family.
20. What was the name of the quill that Rita Skeeter used when interviewing Harry in the closet?

This quill is pretty nifty! It writes by itself and makes up the detail as it goes along. Must make Rita's job a lot easier!
Why didn't I have one of those when I went to school? 0:-)
Source: Author Tainted Angel 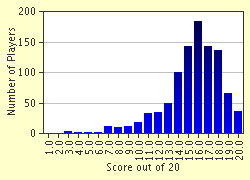 
Other Destinations
Explore Other Quizzes by Tainted Angel