...the continuing saga of Harry Potter!

Quiz Answer Key and Fun Facts
1. How old would Frank have been on his next birthday?

'Two hundred miles away, the boy called Harry Potter woke with a start.' At this point in the story Harry had not yet returned to school.
3. Amos Diggory works for?


Answer: The Department for the Regulation and Control of Magical Creatures

The other departments are staffed by many of the people that Harry met at the world cup.
4. What does Arthur Weasley collect beside plugs?

He proudly informs Uncle Vernon of this.
5. Who made the Wizardwear advertised at the World Cup?

Gladrags Wizardwear was advertised on the flashing giant blackboard.
6. Who raised the trophy after winning the world cup?

After Ireland won the World Cup they went to the top box to receive the trophy. Not all were well enough to raise the trophy to the crowd.
7. How many bedrooms did Mundungus Fletcher claim to have?

He was making a claim for compensation for the loss of a twelve bedroomed tent with en-suite jacuzzi. Percy knew for a fact Mundungus had only been sleeping under a cloak propped up on sticks.
8. Who shared a carriage with the three friends on the way from the train to Hogwarts?

Good old Neville Longbottom!
9. What date in October did the delegates from Beauxbatons and Durmstrang arrive?

The delegates were due to arrive at 6 o'clock. Classes finished half an hour early that day for this reason. Can we assume that Harry and his friends usually have lessons until 6pm. Bit of a long day, no wonder they were pleased to miss Potions!
10. For what did Moody mistake his birthday gift of a carriage clock?

Moody and Karkaroff were discussing Moody's affinity to overreaction.
11. What did Mr Ollivander produce from the end of Cedric's Wand?

This was during the 'Weighing of the Wands'. The flowers came from Fleur's wand, the birds from Krum's and the wine from Harry's.
12. What colour were Percy's dress robes at the Yule Ball?

Bought new for the occasion.
13. What was the only name Karkaroff gave to the enquiry that they didn't already know?

The others had either died fighting arrest or were already being held for trial.
14. How many points tied Cedric and Harry in first place?

Krum had eighty points.
15. The dark mark is on Snape's left arm.

Snape showed the mark to Fudge after he refused to believe Voldemort had returned.
Source: Author djellibabe 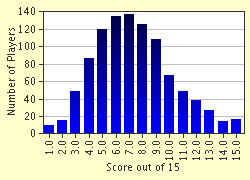 
Other Destinations
Explore Other Quizzes by djellibabe