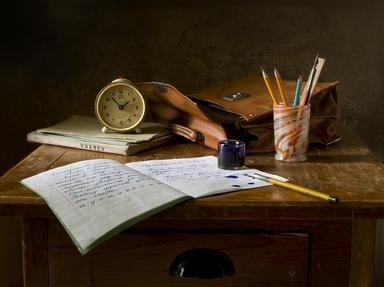 So you've won the lottery, and you're trying to decide how to spend it all? Travel and cosmetic surgery are only two of your options!

Quiz Answer Key and Fun Facts
1. We might as well start with the travel option. Since money is no object, let's go for something that is really out of this world. Who was the first person to pay for an orbital flight, thereby earning the title of the first space tourist?

These were the first four people to have paid Space Adventures to take them for a trip to the International Space Station. Each of them paid around $20 million for a trip of eight to ten days. Dennis Tito visited space 28 April - 6 May 2001, and originally planned to visit Russia's Mir - his fee was intended to finance maintenance for the aging space station.

When Mir was decommissioned, he managed to transfer his destination to the International Space Station, despite objections from NASA, who didn't want tourists underfoot. Due to the fact that these people had to undergo some serious training in preparation for their trips, they dislike being called tourists - the phrase spaceflight participant is used by NASA, and each of the people who have made the trip has come up with their own personal description of their status.
2. Instead of travel, perhaps you want to change something about your appearance that has always bugged you, such as those Dumbo-like ears that keep poking through your hair, no matter what style you adopt. What is the term used for surgery to make the outer ear less obtrusive?

Also called ear pinning, otoplasty is cosmetic surgery that reduces the size of the auricle, or makes it lie closer to the skull, or both. Surgeons usually take care to maintain the slight asymmetry of human ears - the final product will be two ears that are not absolutely exactly identical, so one may be slightly larger, or located a bit higher, or at a slightly different angle. Otoplasty can involve a number of different corrections: changing the size and shape of earlobes which may be too large (especially if they have stretched through wearing heavy jewelry) or too small; removal of wrinkles from ear lobes, straightening ear tips that fold forwards, enlarging the auricle of a very small ear, adding a curved outer rim to an ear which does not naturally have one, even the construction of an entire external ear for someone who was born without one, or lost it through an accident.

Rhinoplasty is cosmetic surgery on the nose (usually to change its shape, generally making it smaller), blepharoplasty is on the eyelids, removing extra skin that creates visual wrinkles; rhytidectomy is more commonly called a facelift, designed to make the face appear more youthful.
3. Now that you have the money, maybe you'll invest in a fabulous wedding dress. Not off the peg, you want one that has been personally designed to make you look perfect on the big day. Who designed the wedding gown that Grace Kelly wore for her wedding to Monaco's Prince Rainier III in 1956?

Actually, there were two dresses, one for the civil ceremony and one for the religious ceremony, both designed by Helen Rose. She was a costume designer at MGM, and the dresses were the studio's wedding gift to one of their biggest stars. It is the dress worn for the religious ceremony which is the one most remembered - if you want to see it, you can visit the Philadelphia Museum of Art, the current owners (but make sure it is on display - displays rotate!).

The fitted bodice had a high neckline and long sleeves - a very demure yet glamorous look.

The dress was made of silk taffeta, silk net, peau de soie and Brussels lace. Her tulle veil was fastened to a Juliet cap (think of watching Shakespeare's Juliet on stage to see what one looks like) that was covered with pearls.

The total cost of making the dress (not including the money paid separately for its design) was over $7,000.
4. Maybe shoes are your thing. If you missed the release of the limited edition Nike Mag self-lacing shoes, you will find them available on auction sites, with prices in the range of $30,000. What movie character inspired their production?


Answer: Marty McFly, in 'Back to the Future II'

In the second instalment of the 'Back to the Future' trilogy, set in 2015, Marty McFly (played by Michael J. Fox) sported a pair of self-lacing Nike shoes. The company decided to manufacture shoes which looked the same, but the first batch of replicas in 2011 were not power-lacing. Nevertheless, the 1500 pairs were keenly bid on when auctioned on eBay, with prices ranging from $2300 to $9959. All proceeds from the auction (and the subsequent private auction of another ten pairs) were donated to the Michael J. Fox Foundation, which was engaged in research on Parkinson's disease. On 21 October 2015 (the date when Marty McFly arrived in the future in the 1989 film), a self-lacing version was announced. Subsequently, 89 pairs were raffled off, with tickets costing $10. If you want to buy one of those now, however, you will need to fork out considerably more - a pair was auctioned in 2018 for $28,000.
5. You know that a Rolex watch is going to set you back, big time. But the manufacturer won't charge you the nearly $18 million that was paid in a 2017 auction for one. What model was this, which was nicknamed for the blue-eyed actor who had been given this engraved watch by his wife, Joanne Woodward?

When Joanne Woodward bought the model number 6239 at Tiffany's, and had the message "Drive Carefully Me" engraved on the back, it was just called a Daytona (exotic dial). Between 1968 and 1984, Paul Newman wore it regularly, as can be seen in numerous photos, including footage of his team's second-place finish in the 1979 Le Mans 24 Hour race.

It was this that first associated his name with the model, and the nickname stuck. In 1984 he gave the watch to his daughter's boyfriend. While this was a very special Paul Newman Daytona, a standard Daytona 6239 will probably cost you about $100,000.
6. If you think a bit of bling might be the way to spend your windfall, then possibly you would consider purchasing some at auction. Whose collection, which included a tiara (gift from husband Mike Todd) and a La Peregrina pearl (a Valentine's Day gift from Richard Burton) sold at auction for nearly $116 million in 2011?

Starting with a string of engagement rings/jewelry from her eight marriages (twice to Richard Burton, the second one involving a gift of Russian royal emeralds), Elizabeth Taylor amassed an impressive collection of some of the world's most famous gems and pieces of jewelry. According to her autobiography, when her third husband, Mike Todd, gave her the tiara that she wore regularly, he said, "You're my queen, and I think you should have a tiara." How sweet, and if he didn't say it, he should have. Richard Burton was the husband who gave her the most jewelry, including a magnificent 68 carat pear-shaped diamond now known as the Taylor-Burton diamond, which she wore for the first time at Grace Kelly's 40th birthday party.
7. In 1997 a 4.5 litre bottle (equivalent to six standard bottles) of 1945 Chateau Mouton-Rothschild wine sold at auction for nearly $115,000. What is the name for a wine bottle of this size?

1945 was an excellent year for wines from Bordeaux, and the 1945 Chateau Mouton-Rothschild was the king of the crop. From its first samplings, it gained a reputation for excellence, and it has aged well. The price paid at Christie's equated to about $2500 for a standard 100 ml glass of red wine.

The names used for different sizes of wine bottle are many and varied. The incorrect options were chosen to be ones with a Biblical reference, as is the case for the correct answer. A Methuselah is equivalent to eight standard bottles, A Nebuchadnezzar to twenty, and a Melchizedek to a whopping forty bottles!
8. You might want to get some special glasses from which to sip that expensive wine. Which of these makers of superb crystalware is Irish?

Lead crystal glassware is considered the top of the line, and all of these companies have been famous for the quality (and, consequently, price) of their product. While you're buying the glasses, you might as well indulge in a full set with matching patterns: six wine glasses, six goblets, six water glasses and six champagne flutes can be bought for around $20000. I'd recommend leaving the beer glasses, whiskey glasses, decanters, etc. for another visit.

Lalique are French, Swarovski Austrian, and Steuben American.
9. With a bit of spare cash on hand, maybe it's time to update your collection of classic cars. If you wanted to buy the same model that Paul Newman famously drove at Le Mans in 1979, which of these would it be?

All of these are sports cars, like those raced at Le Mans, and none of them are cheap, so it's a good thing you're feeling rich as you start to shop around. The Porsche 935 was only manufactured between 1976 and 1981, but other models are available as new cars. If you want to buy an example of one of the most successful sports racing cars of the 1070s, however, you will need to look around in vintage car dealers and auction houses. So successful was the Porsche 935 (winning 125 of the 370 races in which one was entered, and often with minor places as well) that a number of races had five or more competitors driving one.

In the 1979 24 Hours of Le Mans, the first three places were taken by teams driving a Porsche 935.
10. If you still have any money left after this spending spree, perhaps you might want to emulate the Florida couple who paid around $150,000 to a Korean company to have their deceased pet cloned. What kind of animal was Sir Lancelot Encore, the first of his species to be commercially cloned?

While the newspaper stories about this event emphasised the gorgeous little golden Lab, and the fact that he went on to lead a full life, including siring several litters of puppies, anyone thinking of using this as a way of getting back a beloved companion should think very carefully. First of all, the cloned pet has the genetics of the original one, but developed under totally different circumstances, and will have its own personality. Also, the process of cloning a new animal is fraught with difficulty, and one of the reasons for the cost in this case is that it took multiple failed attempts to produce a healthy puppy. I personally don't even want to think about those failures.

Sir Lancelot Encore was the first pet dog to be commercially cloned, arriving in the world in October 2008, but not the first pet. That honor goes to Little Nicky, a Maine Coon cat born in October 2004.
Source: Author looney_tunes