Down Under Trivia Quiz

Let's investigate some ships that went down under Down Under - shipwrecks along the coast of Australia.

Quiz Answer Key and Fun Facts
1. The Dutch East India Company's flagship Batavia was wrecked on Morning Reef after leaving the Cape of Good Hope on 22nd April 1629 and heading for Batavia in Java on its maiden voyage. Off the coast of which Australian state will you find Morning Reef?

Sometime after midnight on 4 June 1629 the Batavia ran aground on Morning Reef. The captain and the officers took the ship's sloop the next morning, and set off to get help from Batavia (now known as Jakarta), leaving the rest of the crew and the passengers on Beacon Island, later referred to as Batavia's Graveyard. High drama ensued, as the leaders of a mutinous segment of the crew organized themselves to try to kill everyone else, planning to hijack the rescue ship on its arrival (or build something out of the wreckage if it never came). Some survivors had moved to other islands, and were able to hold out; when Captain Pelsaert returned in September, the mutineers were swiftly dealt with - 7 were hung, 2 were castaway on the mainland, the rest were taken to Batavia for trial and punishment.

"Batavia" is an opera by Richard Mills, with a libretto by Peter Goldsworthy, based on these events.
2. In 1802, the first recorded shipwreck off the coast of South Australia occurred in a spot near the tip of the Eyre Peninsula, which was subsequently named Cape Catastrophe. A small cutter from HMS Investigator sank, with the loss of 8 crew members. Who was the captain of Investigator, who was in the process of mapping Australia's coastline at the time?

A party from the ship went ashore to fetch water, and disappeared on the way back. Search boats encountered strong riptides and sharks in the area, leading them to suppose that a combination of these had led to the boat's disappearance. Still in desperate need of fresh water, Matthew Flinders had to abandon the men, leaving a copper plaque commemorating the incident in Memory Cove before departing. Eight islands in the vicinity were named after the victims.
3. On 6th August 1837 a whaler sank after running aground on a rock that was part of a reef along the coast of Lord Howe Island (off the coast of New South Wales). The rock was named after the ship (although an inaccurate spelling from newspaper reports was used). What ship struck what rock?

On 6th August, 1837, the whaler Wolf sailed past Lord Howe Island carrying 1,700 barrels of sperm oil, with a sick crew (after 18 months at sea) and short on water. They decided to land, struck the reef, went back out to inspect the damage, found the hull apparently undamaged, then started shipping water. Within half an hour the ship had sunk, with the loss of all cargo but no lives, as all members of the crew managed to reach the shore, 10 miles away.

The wreckage has never been found, and is regularly sought, as it has the potential to reveal valuable insights into whaling at the time. Newspaper reports at the time spelled the ship's name as Wolfe, hence the name of the rock.
4. With all the traffic coming through the Heads to bring supplies and passengers to Sydney during the 19th century, it's not surprising that there have been a number of shipwrecks there. On the night of 20th August 1854 the Dunbar ran aground on South Head under conditions of terrible visibility. Of the 63 passengers and 59 crew, how many survived?

Nobody knows what error led to the fateful impact, although theories abound. Captain Green had been to Sydney before, but seems to have become confused about his location in the gale-force winds. One member of the crew, James Johnson, who was thrown onto the cliffs, managed to hold on until morning. He was discovery by rescuers; and was the sole survivor. Johnson was later employed at the Newcastle lighthouse, where he was part of the rescue of the sole survivor when the steamer Cawarra sank in 1866.

Barely two months after the wreck of the Dunbar, the Catherine Adamson was wrecked on North Head with the loss of over twenty lives. These two disasters occurring in such a short space of time led to the construction of the red and white Hornby Lighthouse on South Head, to mark the actual entrance to the harbour.
5. Wreck Bay, on the southern coast of New South Wales about 180 km (110 miles) south of Sydney, has a name that should have suggested it was a place best avoided by ships. Which Australian Naval Base is located in the immediate vicinity of Wreck Bay?

So renowned was the danger of the coast near Jervis Bay that Welbank's "Nautical Almanac" carried advice to keep well away from the coast during fog or storm, especially with a wind from the sea blowing. But hugging the coast could save valuable time when traveling north towards Sydney, and shipwrecks in Wreck Bay just south of Jervis Bay were a regular occurrence. Two of the most famous ships to go down there were the convict transport Hive in 1835 (possibly the first craft to sink in the bay) and the clipper ship Walter Hood, after 17 years on the coast run, in 1870.
6. The SS Moltke ran aground near Townsville in 1891, and again, after being salvaged and turned into a coal hulk, in 1895. For what bizarre purpose did Dr. McCabe, a resident of Magnetic Island, purchase Moltke in 1911?


Answer: To be sunk and used as a breakwater

Dr McCabe's visitors found the water in Geoffrey Bay, where they landed on the island, to be rather rough for the ladies, so McCabe planned to sink Moltke so as to form a breakwater. While towing it into position, the charges were accidentally detonated prematurely, It sank in shallow water nowhere near the intended site, and provided some shelter for small craft but none for the doctor's jetty.

It is now almost completely submerged, due to erosion over the years. The car ferry to Magnetic Island delivers visitors (nicely dry) about 100 metres away from the remains of the Moltke.
7. The Centaur, built in 1924, was commissioned as a hospital ship in 1943. Two months later she was sunk by torpedoes, with the loss of 268 lives. What nationality was the submarine that sank Centaur?

In May of 1943 Japanese submarines were cruising the coast of Australia attempting to sink merchant craft. Despite the fact that Centaur was clearly marked as a hospital ship, painted white with red crosses and fully lit, and that the trip (from Sydney to New Guinea via Cairns) had been publicized in diplomatic channels, the submarine I-77 torpedoed her near Brisbane at 4:10am on 14th May 1943. The ship exploded, and only 64 were rescued.

On 20th December 2009 the final resting place of the hospital ship Centaur was discovered; a few days later a memorial plaque was placed on the deck of the wreck, 2000m below the surface.
8. In 1947, HMAS Warrnambool was part of a group of ships working on the Great Barrier Reef. When a cable on HMAS Swan snapped, the Warrnambool swung hard to starboard to move behind the other ship and then ____________ .


Answer: struck a mine and sank

The flotilla was engaged in minesweeping, removing all the mines that had been laid around the Great Barrier Reef in anticipation of a Japanese invasion that never eventuated. Around 4:00 in the afternoon of 13rd September 1947 the sloop HMAS Swan snapped a cable, whether from snagging the reef (as the captain of the Warrnambool thought) or from dislodging but not snaring a mine is not clear.

The area behind Swan should have been safe, as it had just been swept, so Warrnambool turned for safe water to avoid a collision, and hit a mine.

The four sailors who died in the incident are considered the last naval fatalities of World War II.
9. The Australian navy's HMAS Melbourne is often called a jinx ship, as it has been involved in several high-profile collisions with other ships. What ship was split in two during a collision with HMAS Melbourne on 10th February 1964 near Jervis Bay?

The aircraft carrier HMAS Melbourne (II) caused the destroyer HMAS Voyager (II) to sink when Voyager ran across the front of Melbourne. (Australians like to recycle names for their naval vessels.) HMAS Voyager lost 82 crew members; HMAS Melbourne suffered physical damage but no loss of life.

On 3rd June 1969 HMAS Melbourne and the USS Frank E Evans collided in circumstances that were very similar to those of the Voyager disaster, with the loss of 74 lives. These two incidents, along with a number of smaller collisions and accidents on the ship led to the Melbourne being labeled a jinx ship. Melbourne continued in service until 1982. She was the first British Commonwealth ship to sink two friendly warships in peacetime.
10. The bulk ore carrier MV Lake Illawarra ran into a bridge and sank, bringing the bridge down with it, at 9:27 pm on 5th January 1975. What bridge was involved in this accident?

The Tasman Bridge Disaster occurred when the captain of the MV Lake Illawarra realized he was off course, then over-adjusted his correction and ran into two of the pylons of the Tasman Bridge, which crosses the Derwent River near the centre of Hobart. The MV Illawarra could have passed under the bridge's central navigation span, but not the eastern span to which it headed.

Along with the two pylons, a 127 metre length of the bridge collapsed. No cars were on the section that fell, but four cars drove into the gap, leading to 5 deaths. Two cars stopped teetering dramatically on the edge. The fallen bridge debris caused the ship to sink in 35 metres of water, leading to another 7 deaths. The wreck is still there, having been deemed unsafe to move.
Source: Author looney_tunes 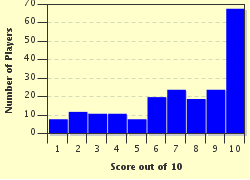 Related Quizzes
This quiz is part of series Commission #7:

Authors wrote two quizzes for this seventh Quiz Commission-- one of their own titles and one of another person's-- back in February 2010. It's double or nothing!