For the Boys and Girls in the World Quiz

This quiz shall test shall be fair to both sexes by testing knowledge common to both women and men. Enjoy!

Quiz Answer Key and Fun Facts
1. Which of the following is a traditional gift for a 30th wedding anniversary?

Daimler, a German, invented the first motorcycle with a gas engine, and was basically an engine attached to a wooden bike. The engine was invented by Otto (a former employer of Daimler) and was used to attach to the modern bicycle. The first company to make motorcycles for sale was Hildebrande and Wolfmulle of Germany in about 1890.
3. Which of the following is not a form of cosmetic surgery?

Tissue expansion is a form of reconstructive surgery which aims to help patients of all ages deal with problems caused by aging. This is different to cosmetic surgery which is performed to reshape structures of the body to improve the patient's appearance and self-esteem.
4. The "Dream Team" was a name given to a gold-winning US Basketball team.

The name was given to the team after their performances in 1992 Barcelona Summer Olympic Games. The team consisted of NBA stars including Michael Jordan, Larry Bird and Magic Johnson. Basketball was invented in the US and has been a permanent fixture in the Olympic Games since 1936.
5. What is an orangewood stick?


Answer: A small wooden stick used to clean under fingernails and toenails.

Used for the general hand and feet care, orangewood sticks can be found in most nail kits and drug stores. A favourite to many women around the world, orangewood sticks are designed to loosen the cuticles gently, clean the free edges under the nails and remove any excess nail polish remaining on the cuticles or the sides of the nails.
6. Which of the following is an example of a standard drink.

A standard drink is equal to 10 grams of pure alcohol and is a simple measure to work out how much alcohol a person is drinking. It is a more reliable measure of how much alcohol is consumed compared to counting glasses, cans or bottles. A standard drink accounts for 30 millilitres of straight spirits, a 330 millilitre can of beer and a 100 millilitre glass of table wine.
To limit health and social risks, men should drink no more than 4 standard drinks a day, and for women, no more than 2 standard drinks a day. People should also aim to have one or two alcohol-free days each week.
7. Which of the following forms of hair removal can be done in hot or cold, is economical and has results last from three to eight weeks?

Waxing is a popular hair removal method for those with a high pain tolerance. It involves using wax adhesives to remove large amounts of hair from the roots in an area of the body. Hot waxing involves applying hot wax in a thin layer and is torn off quickly after it cools. Cold waxing involves a strip of pre-heated wax being rubbed into the skin and ripped off in one quick pull.
8. Carbohydrate loading is commonly used by which group of people?

Carbohydrate loading is a strategy used by endurance athletes such as marathon runners and triathletes to increase glycogen stores in the muscles. Developed in 1967, carbo-loading involves manipulation to an athlete's diet and training regimen in the aim of improving performance.
9. Who won the award for the best performance by an actress in a leading role at the 78th Academy Awards?

Witherspoon won the award for her leading role in "Walk the Line." She held out other nominees for the award who included Charlize Theron (for "North Country"), Keira Knightley (for "Pride and Prejudice"), Felicity Huffman (for "Transamerica") and Judi Dench (for "Mrs. Henderson Presents").
10. Which of the following ranks highest in a game of Texas Hold'em Poker.

Poker has significantly increased in popularity over the last few years with increased media publicity and appearances in hotels and clubs over the world. The ranks of hands in Texas Hold'em Poker (from highest to lowest) is as follows: Royal Flush, Straight Flush, Four of a Kind, Full House, Flush, Straight, Three of a Kind, Two Pair, Pair, High Card.
Source: Author skturner 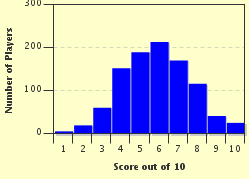 Related Quizzes
1. Take Another 50-50 Chance Average
2. Boyz Type Stuff Average
3. Which One Does Not Belong? Tough
4. Useless But Fascinating Facts Difficult
5. Guys, Prepare to Meet Your Doom! Average
6. One for the girls! Difficult
7. General Knowledge Tough
8. How Observant Are You? Tough
9. Pop Quiz on Pop Easier
10. Girly Stuff Difficult
11. For All The Boys In The World Average
12. Feelin' Easy Average


Other Destinations
Explore Other Quizzes by skturner