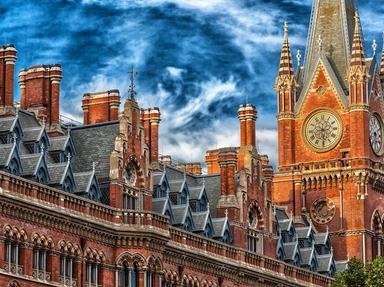 Another quiz that will be easy for those from the UK and a little more testing for non-Brits. Have a go - The best of British luck to you!

Quiz Answer Key and Fun Facts
1. Which British queen gave her name to a type of sponge cake?

A Victoria sandwich is two layers of sponge cake with a jam (jelly) filling in between.
2. Which of these is an annual race between Putney and Mortlake in London?

The University Boat Race dates back to 1829, it is said to be the world's oldest surviving sporting event. Teams from Oxford and Cambridge Universities compete for the honours over the four-and-a-quarter-mile course on the river Thames.
3. The pudding traditionally eaten with roast beef has the same name as which English county?

Yorkshire pudding is made with a batter mix: flour, egg, milk, fat and salt. Place in a hot oven 450' F for ten to fifteen minutes. If successful the pudding will be crisp and golden on the outside, and light and fluffy on the inside.
4. Where is the official residence of the British Prime Minister?

Number 10 Downing Street has been the official home of British Prime Ministers since 1735. It was a gift to the Government from King George II. The Chancellor of the Exchequer's official residence is next-door at number 11 Downing Street.
5. In what part of the UK is haggis traditionally eaten?

Traditional haggis is made with: lambs liver, oatmeal, suet and onion, seasoned with salt and pepper. These ingredients are stuffed into a sheep's stomach (pluck) and boiled for several hours - Yummy! Haggis is traditionally served in Scotland on (Robert) Burns Night, January 25th.
6. Legend says that St. George, the patron saint of England, slew what type of creature?

The dragon is said to represent Satan, and according to the legend St George killed the dragon to defend the church.
The UK celebrates St George's Day on the 23rd of April.
7. The vegetable leek is the emblem for which part of the UK?

The leek has been an emblem for Wales for around five-hundred years. Legend says that the Welsh fought the Saxons in leek fields. Also in the past leeks formed an important part of the Welsh diet. The daffodil is also used a Welsh emblem and is worn on St. David's Day, 1 March - St. David is the patron saint of Wales.
8. In which of these countries is "Pommy" (Pommie) a term used for the English?

There are several possible derivations for the expression "Pommy" (Pommie). One says that it could be a corruption of the word pompous. Another, that it could date back to the time England transported convicts to Australia, and is an be an acronym of the phrase "Prisoner Of Mother England" (Pome), "Prisoner of His/Her Majesty" (POHM) or "Prisoner Of His/Her Majesty In Exile" (POHMIE).
9. What would you do with a "toad-in-the-hole"?

Toad-in-the-hole is a traditional English dish and an old favourite. The ingredients are pork sausages baked in a batter mix.
10. According to legend the nursery rhyme "Ring a Ring a Roses" (or "Ring Around the Rosy") relates to which 17th-century British disaster?

The Great Plague struck London in 1665. The nursery rhyme goes:
"Ring around a rosey, a pocket full of posies.
Achoo, Achoo, we all fall down."
Symptoms of the bubonic plague were circular red rashes and violent sneezing. People carried fragrant posies of flowers in their pockets for protection as it was believed the plague was transmitted by bad smells. The Great Fire of London, in 1666, killed the rats that carried the disease and ended the spread of the disease - although, there are claims that the rhyme post-dates the plague and therefore may not be not connected.
11. In 2002 Liverpool Airport was renamed as a tribute to which member of the Beatles?

Liverpool Airport was renamed John Lennon Airport in March 2002. As part of the ceremony Yoko Ono unveiled a statue of her late husband. This is the first UK airport to be named after an individual.
12. Wimbledon is famous for which type of annual sporting tournament?

The first lawn tennis championship was held at Wimbledon in 1877. Around half-a-million tennis fans attend the championships each year. The traditional spectator fare at Wimbledon includes fish and chips (fries), strawberries and cream, and champagne.
13. A "Cockney" comes from which of these British cities?

A true Cockney is born within the sound of the Bow Bells, the bells of St. Mary-Le-Bow Church, in the Cheapside area of London. Cockneys are famous for their sense of community and their rhyming slang: e.g. "Trouble And Strife" ... Wife, "Baked Beans" ... Jeans, And "Grass In The Park" ... Nark (Informant) These terms were often abbreviated to the first word of the rhyme and used as a form of code.
14. The Channel Tunnel, linking the UK to the rest of Europe, runs between England and which country?

The Channel Tunnel was opened by Queen Elizabeth II and French President François Mitterrand on May 6, 1994. It is thirty-one miles (fifty km) long and has three separate parallel tunnels. All Channel Tunnel traffic goes by rail and the journey takes thirty-five minutes.
15. Which of these statements is true about unmarked English mute swans?


Answer: They are owned by the Crown

The normal lifespan of a swan is around twelve years, although they can survive to thirty years. Swans generally mate for life and grieve like humans for a lost partner. Each year in the third week of July a census of the swans on the river Thames, called "Swan Upping", is conducted.
Source: Author musicmonkeyman 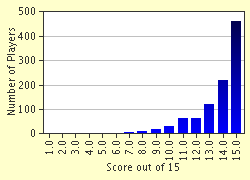