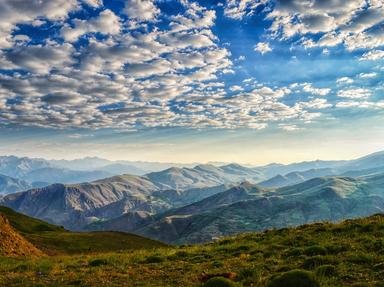 Mighty Mountain Ranges: Who Am I? Quiz

The game is simple: some of the world's greatest mountain ranges will give a brief description of themselves, and you have to guess who they are. Enjoy yourself!

Quiz Answer Key and Fun Facts
1. I pass through seven countries, namely Venezuela, Colombia, Ecuador, Peru, Bolivia, Chile, and Argentina. I am the source of the famous Amazon river and most of its tributaries. The world's highest navigable lake, Titicaca, is located on me, along the border of Peru and Bolivia. The main domestic animal around here is the llama, which can live easily at high altitudes. The great Inca civilisation flourished in my northern areas, and there they constructed the great cities of Macchu Picchu and Cuzco. The highest mountain in the western hemisphere, Aconcagua, is located on me in Argentina. Who am I?

The largest mountain range in South America, the Andes run north-south for more than 8,000 km along the western edge of the continent.
2. I am famous for my alpine regions and snow-capped peaks, and I am a favourite skiing destination. Tourists love me, because of the beautiful scenery on my hills and valleys, and the great weather. 70% of the country of Switzerland is covered by me. Mont Blanc, Europe's 2nd highest peak, is located at the Franco-Italian border on me. Who am I?

The Alps are the great mountain system of south-central Europe, stretching for around 1,200 km from the Gulf of Genoa to the Danube river in Vienna, Austria. Mont Blanc is Europe's second-highest peak, after Mount Elbrus in the Caucasus.
3. I lie in North America and run for 2,400 km nearly parallel to the eastern coast. I extend from the province of Quebec in Canada to the northern part of the US state of Alabama. I am heavily forested, and I have vast deposits of carbon-rich anthracite and bituminous coal. Who am I?

The first coal mine in the USA was opened in Virginia, in the Appalachian bituminous field, during the 1750s; 50 years after which the mining of anthracite began.
4. I am a major mountain system in Central Asia, and I lie largely in north-eastern Afghanistan, and Pakistan. I extend in a southwesterly direction for 1,000 km. My land is generally barren and infertile, and I have many tall and perennially snow-capped peaks, the highest of them being Tirich Mir (7,690 m), which is in Pakistan. The most used pass that has been used for centuries to overcome me is the Khyber pass, located on the Afghan-Pak border. Many Taliban and al-Qaeda men hid with the help of my not-very-accessible terrain and caves, after the 2001 American War. Who am I?

Most of India's foreign invaders, starting from Alexander the Great to Tamer Lane, to Mahmud of Ghazni to Nadir Shah, made their way to India through the Hindu Kush via the Khyber Pass.
5. I am a great chain of rugged mountains in North America, extending from central New Mexico in the USA to north-eastern British Columbia in Canada, for a distance of about 3,220 km. To my east are the great Central Plains of North America. The famous Glacier National Park is located on me in the US northern state of Montana. Who am I?

The Rocky Mountains form part of the great Continental Divide of North America, which separates rivers draining in the Atlantic or Arctic oceans, with those emptying themselves in the Pacific.
6. I run north-south, for a distance of 2,400 km from the Arctic Ocean in the north to my southern limits in Kazakhstan. I traditionally have marked the boundary between Europe and Asia, and even today am the border between European and Asian Russia. There is a major oil producing area to the Asian side of me. Among the important cities around me are Magnitogorsk, Yekaterinburg and Chelyabinsk. Who am I?

Unfortunately for these mountains, my regions have become a major centre for nuclear weapons since 1948, and there have been a few accidents since.
7. I am located in eastern South Africa, and form part of the Great Escarpment, a ridge that divides the low-lying areas of the eastern South African coast from central plateau region that covers the most of the country. I extend for about 1,125 km and contain South Africa's highest points. I form the eastern border of the tiny country of Lesotho, and also partially that of Free State in South Africa. Who am I?

The scenic Royal Natal National Park is located on the Drakensberg. This park is famous for the Amphitheatre, a famous crescent-shaped rock wall.
8. I am a system of mountain ranges and plateaus in eastern Australia, running north-south for 3,000 km. I stretch from the north-eastern tip of Queensland, running through the entire length of the eastern coastline through New South Wales and Victoria before turning west and then fading away in Grampians plains in western Victoria. All the alpine areas of mainland Australia are located on me. I mark the boundary between eastward and westward flowing rivers. Who am I?

Mount Kosciusko, Australia's highest peak, is located in this range.
9. I am not as mighty as the other ranges in this quiz, however, I do have some historical significance in being the original inhabitance of the Aryan civilisation. I extend for about 1,200 km through Georgia, Armenia, Azerbaijan and south-west Russia. Who am I?

Along with the Urals and the Caspian Sea, the Caucasus mountains form the traditional boundary between Europe and Asia.
10. I am the mightiest of the mighty mountains in the world, and contain the world's highest peaks, including Mount Everest, Kanchenjunga and Lhotse. I pass through many countries including Pakistan, China, India, Nepal and Bhutan. I was formed due to collision of the Eurasian and Indo-Australian tectonic plates, and I am classified as 'young fold mountains' I am known the world over as the ___ .

Because even today the Indo-Australian plate is pushing into the Eurasian plate, the height of the Himalayas increases at the rate of eight metres per century.
Source: Author achernar 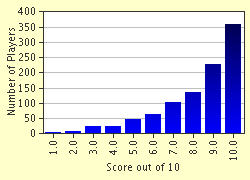 
Other Destinations
Explore Other Quizzes by achernar