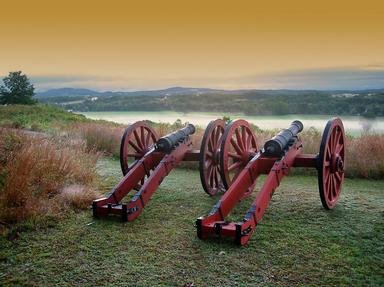 This will be a quiz on points in the American Civil War. After over five years on this site I decided it was time I finally made my own quiz! I hope you enjoy this quiz and any feedback would be appreciated. Enjoy!

Quiz Answer Key and Fun Facts
1. What event is generally held to have marked the start of the Civil War in 1861?

The attack on Fort Sumter was led by Confederate commander P.G.T. Beauregard and this was the major event that kicked the war off.
2. In which battle was Thomas 'Stonewall' Jackson injured, resulting in his death?

He was accidentally shot by another Confederate soldier and was transported off of the battlefield. Seven days afterwards, he died of disease, the main cause of deaths during the war.
3. Which executive order did Abraham Lincoln issue that made the freedom of slaves a Union war goal?

This was issued on January 1st 1863 and it immediately freed 50,000 slaves and was one of the main war goals.
4. The Civil War was a major war for the United States and changed it for years to come. Approximately what percentage of Americans died during the War?

There were 620,000 total known military deaths in the war, a huge number for any war. In addition, there were also some civilian deaths, but it is hard to establish the number.
5. Winfield F. Scott proposed the Anaconda Plan to the Union, which was one of the deciding factors in the Union victories. What exactly was the Anaconda Plan?


Answer: To establish a naval blockade to cut off supply lines

This severed major Confederate supply lines from overseas and was one of the Union's strongest tactics. If this hadn't been established the Confederates would have had a much higher chance of victory.
6. Who was the first, and only, President of the Confederate States of America?

During the period of the war there was only ever one president of the CSA. However, this still showed that they planned the Confederacy to last a long time.
7. In which *building* did Robert E. Lee surrender to Ulysses S. Grant?

This was where he signed a document of surrender and the rest of the CSA surrendered shortly after, resulting in Union victory. (The actual courthouse was shut that day as it was a Sunday. This runs counter to popular belief, including my own at first.)
8. What was the main cause of death in the Civil War?

Disease killed the majority of soldiers during the war, much to my surprise when I heard it!
9. What do the initials PGT stand for in P.G.T Beauregard?

The name Beauregard is French and means 'beautiful expression [or look]'. He was born in Louisana.
10. What was the name of the Confederate sympathizer who killed Abraham Lincoln and injured Major Henry Rathbone?

Booth was a semi-famous stage actor and he knew the play Lincoln was watching quite well, having acted in it a few times. He waited until the most comical part of the play and then timed his shot with the laughter. However, he was still caught in the end.
Source: Author craaaaazy 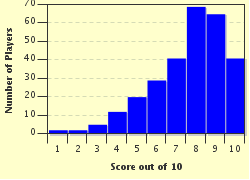 
Other Destinations
Explore Other Quizzes by craaaaazy