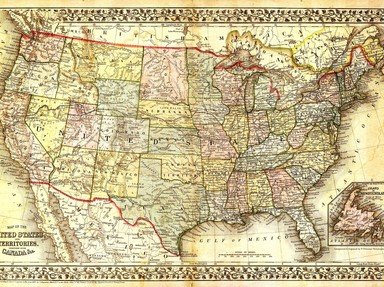 Can you match the second set of ten US states (#11-20) with the date they joined the Union and the state motto? Good luck!

Along with Virgina (the 10th state to ratify), New York was seen as essential to the success of the Constitution. Under the Articles of Confederation, New York City was the seat of government from January, 1785 to the Fall of 1788, and in 1789, George Washington was inaugurated in front of New York's Federal Hall as the first President of the United States under the Constitution.

Rhode Island's path to ratifying the U.S. Constitution was a bit of a lengthy one. Rhode Island was the only one of the 13 original colonies to NOT send a representative to the Constitutional Convention, and afterwards, held a number of unsuccessful referendums before finally convening their own ratifying convention. Once they finally ratified it (by a narrow 34-32 vote) on May 29th, 1790, it had already been in effect since April of the previous year.

Not only that, but by the time they came on board, the First Congress had already passed a dozen amendments!
4. 14th - March 4, 1791 - "Freedom and Unity"

Vermont had its roots in an independence movement... not from the British, but from the State of New York. A number of communities banded together and declared their independence, complete with constitution, on January 15th, 1777. Unfortunately, their claims were not recognized by the other states until just prior to their joining of the Union.

In January of 1791, the Vermont General Assembly met to discuss an application to join the United States of America, and voted overwhelmingly to do so (105-2). Vermont was admitted to the Union as the 14th state on March 4th, which is still celebrated as 'Vermont Day'.
5. 15th - June 1, 1792 - "United we stand, divided we fall"

Originally part of Virginia, Kentucky began the process of achieving its own statehood in the 1780s, and very nearly were granted statehood under the Articles of Confederation... but just before that could happen, the all-important ninth state to ratify the U.S. Constitution changed the system of government and Kentucky's bid no longer qualified.

They began the process anew, and after creating a new Kentucky Constitution and submitting it to the U.S. Congress, Kentucky became the 15th state of the Union on June 1st, 1792.
6. 16th - June 1, 1796 - "Agriculture and Commerce"

Tennessee was the first U.S. state that was created out of land that was under the jurisdiction of the federal government. A territorial census in 1795 showed a sufficiently large population, and this was followed by a referendum that saw a two thirds voting approval for joining the Union.

Congress approved of Tennessee's admission in a close vote, and the United States was now 16 members strong.
7. 17th - March 1, 1803 - "With God, all things are possible"

Ohio had an interesting route to admission to the Union. On February 19th, President Thomas Jefferson signed an Act of Congress that approved Ohio's admission and constitution. Congress, however, never actually voted on it. In 1853, when Ohio Congressman George Bender realized the oversight, he introduced a special bill that retroactively admitted Ohio to the Union on March 1st, 1803 - which was the date that Ohio's General Assembly convened for the first time.
8. 18th - April 30, 1812 - "Union, justice, confidence"

The road to Louisiana's statehood began with the Louisiana Purchase in 1803, when the U.S. bought the territory from the French (an area that would one day encompass 15 states and a portion of two Canadian provinces). The state of Louisiana that joined the Union in 1812 was the area known as the District of Orleans.

The 1810 census showed the District of Orleans to have a sufficient population to support statehood, and in 1811 a convention was called to create a constitution and to apply for statehood. On April 30th, 1812, exactly nine years after the signing of the Louisiana Purchase, the State of Louisiana was granted admission to the U.S. as the 18th state.
9. 19th - December 11, 1816 - "The Crossroads of America"

The Indiana Territory named its capital as Corydon in 1813, and two years later they began the process of applying for statehood. In June of 1816, delegates met to write a constitution to be approved by Congress. Prior to President Madison's signing approval of Indiana's admission (Dec. 11th), the first General Assembly under the Constitution met (Nov. 4th), the Governor and Lieutenant-Governor were inaugurated (Nov. 7th), Senators were elected (Nov. 8th), and the Congressman took office (Dec. 2nd).

The Mississippi Territory was created out of a number of sources, beginning with Pinckney's Treaty of 1795, which ended Spanish control over Mississippi. The State of Georgia claimed some of the territory, but ended up ceding it back in 1798. Some more land was added to the region following the Louisiana Purchase (1803), and finally, a region of West Florida rebelled and declared independence from Spain in 1810... and were annexed in 1812 by the U.S.

All that to say, elected delegates wrote a constitution and applied for statehood in 1817. The western half of the territory, with Natchez as its capital, became the 20th U.S. state on Dec. 10th. (The capital was moved to Jackson in 1822)
Source: Author reedy 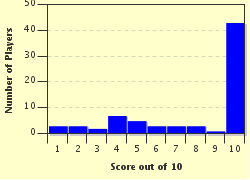 As a Canadian, I was fascinated to learn the history of all of the 50 states as I researched for these quizzes. Please enjoy my "State of the Union" quiz series, along with the bonus Presidents/Prime Ministers matching quiz.