If you know a little about pastry, this quiz should be a piece of cake.

Quiz Answer Key and Fun Facts
1. What is the name of the French dessert that literally means "Crunch in the mouth?"

A traditonal French wedding cake. The Croquembouche (sometimes also spelled croqenbouche) is made by assembling tiny profiteroles into a cone shape with spun sugar.
2. What two flavors make up "Gianduja?"

A commonly used flavor for candy fillings and mousses.
3. What kind of icing is typically used to assemble gingerbread houses?

Used to "glue" pieces together, Royal icing is used because of its hardening characteristic. It can also be found on several "rolled" cookies and some wedding cakes.
4. When making a mousse, you fold whipped cream into your base at the very end. This cream should be whipped to:

You would whip the cream to soft peaks beacause it allows you to incorporate the cream without working the base too much causing it to break. It is actually best to whisk a small amount of base into your cream before folding the cream into your base. I know, sounds a bit confusing.
5. How is a beignet leavened?

Organically with YEAST---For those that have never had a beignet, it's a definite must-try. If you can't make it to France, try the French Quarter in New Orleans, which has several shops where you can find this delectable pastry.
6. Who is the patron saint of Pastry Chefs?

The St. Honore cake is made up of a disk of puff pastry with several profiteroles along the outside, and finally, spun sugar is spread around the dessert.
7. What kind of cheese is traditionally used in making Tiramisu?

Mascarpone has a subtle flavor and very rich texture. The flavor can be easily lost if you use other overpowering flavors. It is also known to be a quite expensive ingredient.
8. The leavening agent in a souffle is:

Because of the air incorporated in the whipped whites and the high temperature of the oven, the souffle rises above the rest. But be careful, what goes up, must come down!
9. The term "soft ball" refers to the cooking stage of sugar when its temperature reaches 240F/115C.

Soft ball is used in making several pastry products. Two of the most common are Italian & Swiss meringues. Be very cautious when cooking sugar, it can be very dangerous.
10. What is the French term for the dough used to make eclairs? 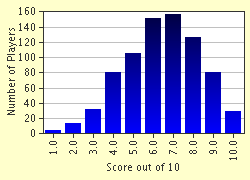 Related Quizzes
1. The Author's Kitchen - International Baking Style Easier
2. Let's Bake Our Way Across the US! Easier
3. Back To Baking/Cooking Basics Very Easy
4. What am I Cooking? Average
5. Baking the Grade Easier
6. Now That's What I Call a Saucepan! Average
7. Help in the Kitchen Easier
8. What's That? Average
9. Truth Is In the Pudding Very Easy
10. Free From Average
11. The Chemistry of Cookery Average
12. My Baking Spree Average


Other Destinations
Explore Other Quizzes by wubanga75