Knowing about baked foods can be a bit of a test, but if you can identify these ones, perhaps you can bake...erm...make the grade. Good luck!

The dough for an éclair is formed and baked before the inside is filled with a thick cream of any sort-- in fact, you can fill an éclair with chocolate cream, custard, or any other flavour. Once fully formed, an eclair is more often than naught covered in chocolate icing.

Originally from France, éclairs have since grown in popularity and can be found in bakeries and doughnut shops around the world. If you like delicious things, there's a good chance you'll like these.
2. This baking pan comes preloaded! What are you most likely to make with this kitchen item?

Mmmmmm...delicious cupcakes. After making the batter, cupcakes are created by filling the baking sheet with special cupcake papers and then filling those with batter (to a certain amount). After baking, they'll end up coming out a stubby-looking muffins.

These make for easy decoration; the best cupcakes are covered in icing and many bakers take pride in crafting something special on top of their baked cake. Lining baking trays with these cups is a great way from creating baked goods that don't stick to the pan; of course that's preventable with good cooking spray.
3. These are biscottis, baked treats often dipped in coffee. The word 'biscotti' actually refers to the process by which they're created. How many times do you bake a biscotti before it's ready?

Latin for 'twice-baked', biscotti is a bread snack cooked and cut in long bricks and dried until crunchy. Often served with coffee, they're best-eaten when dipped into a hot beverage as it allows the bread to soften. Although the dish is best known for being made in Italy, there are a number of variations, mostly from across Europe, and many of which contain different ingredients (including raisins and nuts).
4. What granulated baking ingredient (depicted) makes food sweet and delicious and comes from canes?

Sugar, while delicious, is a relatively crafty carbohydrate. Linked to diabetes and obesity, sugar is a key ingredient in a number of baked goods but tends to get a bad rap. Granulated sugar also comes in a powdered/iced form for use in confections and other dishes. Oddly enough, sugar substitutes like aspartame are regarded as less healthy for consumers; might as well just go for the real thing-- in moderation, of course.
5. Bacon and cheese muffins-- seriously. Sometimes baked goods can be savoury. What does this mean?


Answer: The food is salty, not sweet

Savoury desserts/baked goods are certainly just as enjoyable as sweet ones provided you don't muck up the ingredients. Yes, this means that even bacon-cheese muffins can fit on a table. Savoury typically means that the food is not sweet. Instead, it has a spicy or salty taste typically uncommon in something like a baked dish.

A cheese tea biscuit, for instance, would be savoury. So would cake containing black pepper (it exists!). Some may consider it a bit experimental, but it's a treat for the palate!
6. Delicious, moist, and chocolatey. What's the name of this fiendish cake?

This cake is often closely linked to the Red Velvet Cake, another rich dish though made with red colouring or beetroot. In both cases, the origins of the names reflect their colouring.
7. Mmmmm...cookies. These ones are ginger snaps. Is ginger actually baked into these types of cookies?

Ginger cookies/ginger snaps are both spicy and sweet because they often contain ginger, nutmeg, and other spices in addition to sugar and molasses. Much like gingerbread, the cookies can be decorated to the baker's delight (or even build structures too small for regular people to live in) though ginger snaps are usually simply adorned with sugar, which gives a sweet edge to the otherwise savoury treat.

In the UK, another type of ginger snap is the Cornish fairing. Delicious!
8. Which of these types of breads is dark and made with rye flour?

Bread is perhaps the most basic of baked foods. Made with leavened dough, bread is a staple in most diets and has been made for centuries. Baked until risen, bread usually features an outer crust and a softer inside; some are lighter than others, some are softer, some contain other ingredients (eg. raisins, cinnamon, nuts, etc.). Pumpernickel is a darker bread made with rye flour. Often served with a dip or spread, it's quite dense and expensive compared to more common, white loaves. Pumpernickel originated in Germany.
9. A Baked Alaska is primarily made with ice cream. Can it actually be baked in an oven?

Even though this unique dish isn't made with too many baked elements, it is popped into the oven. This dish requires a scoop of ice cream which, after being covered in meringue, is placed into an oven and cooked until golden-brown. The ice cream doesn't melt during this time because the meringue cooks around it; it's served hot and crispy on the outside and cool on the inside. It can also be served tableside, flambé, if soaked in alcohol.
Would you believe that the Baked Alaska is the state food of Alaska? Well, it's not. Sorry about that.
10. This baked delight is a Black Forest cake. From which country is it commonly said that the cake originated?

The Black Forest region is found in the area surrounding Baden-Baden in Germany, and while the cake didn't specifically come from that region, it did originate in Germany. The name has to do with the addition of cherries to the cake; Black Forest refers to a cherry liqueur. Like a Devil's Food Cake, the Black Forest is baked to have dark, chocolatey layers split by icing of any sort (usually chocolate or vanilla).

It's topped with icing and cherries.
Source: Author kyleisalive 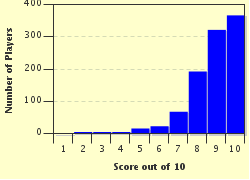 Related Quizzes
1. How to Cook Like Heston: Chicken Average
2. Grandma tries to teach Swimgirl how to cook! Easier
3. Ladles and Jellyspoons Average
4. Let's Bake Our Way Across the US! Easier
5. Know your Sauce? Average
6. More Than a Filling Easier
7. The Life of Pie Average
8. I'll Have Mine Over Easy Easier
9. Doing It the Healthy Way! Average
10. What am I cooking? Easier
11. Can You Bake A Cherry Pie? Average
12. Foods that Take a Beating Average