The Life of Pie Trivia Quiz

How are your pastry skills? Try this quiz about pie know-how and history!

Quiz Answer Key and Fun Facts
1. Which of the following terms was often applied to a pie shell in the Medieval and Renaissance periods?

The coffin or coffyn was a sturdy closed crust that encased meat, fowl or vegetables while they cooked. When it was done, the filling was eaten and the crust was discarded.
2. Children's author Beatrix Potter wrote a book called "The Tale of the Pie and the Patty Pan". What does she mean by a patty pan?

In the story, Duchess the dog tries to switch her veal and ham pie for the mouse and bacon pie baked by Ribby the cat, as she does not much fancy mouse. She inserts a small patty pan into her pie to keep the crust from collapsing as the meat cooks down. Sadly, the pies are switched again and Ribby not only ends up eating mouse pie, but fears she has swallowed the patty pan!
3. When would you most likely expect to eat the traditional savoury French Canadian pie called "tourtiere"?

Tourtiere is a rich meat pie that usually combines pork with veal, beef and sometimes game. It can be eaten at any time of year, but it is traditionally served at a Reveillon, the feast after churchgoers have returned from midnight Mass on Christmas Eve, or, to be more accurate, in the first few hours of Christmas morning.
4. Which of the following would be an appropriate ratio of flour to fat in an ordinary pie crust recipe?


Answer: About three parts flour to one part fat

Various recipes use various proportions, but the flour-to-fat ratio is generally in the neighbourhood of 3:1. A half-half ratio produces a loose paste called roux, which is used as a thickener for soups and sauces.
5. When making enough pie dough for the top and bottom crust of an average pie, which of the following would probably not be the right amount of ingredient to be added to the blended flour and fat?

One or two eggs (or just their yolks) would make a good addition to the crust for a single pie. However, eight eggs would reduce the dough to mush. Moderate amounts of ice water, vinegar and/or sugar are often found in pie crust recipes.
6. What is the most important ingredient for the filling of a shoo-fly pie?

Shoo-fly pie is a Pennsylvania Dutch specialty. It is sometimes called Montgomery pie, in honour of a Pennsylvania county with Amish and Mennonite communities. It is most likely related to the British treacle tart.
7. What does it mean to "blind bake" a pie crust?


Answer: To pre-bake it before filling is added

A blind-baked pie crust may be used with a cold filling. Generally the crust is filled with rice, beans or other small weights so the bottom of the crust does not buckle and rise up while it is baking.
8. When cutting apples for a pie, which of the following would not help keep the apples from browning?

Since citric acid discourages fruit from oxidizing (turning brown in the air), any citrus fruit juice could be used.
9. What is the usual topping for shepherd's pie?

Shepherd's pie (as the name suggests) is a savoury pie filled with ground meat, and was originally used as a way to make the most of leftover roast meat, which was ground, fat and all, and baked into the pie. The potatoes are browned in the oven as the pie cooks. Shepherd's pie is also known as a cottage pie.
10. What is the most important filling ingredient in the French style of savoury pie known as "quiche"?


Answer: A mixture of eggs and cream

The basic quiche is an open crust enclosing an egg-and-cream (or milk) mixture. Generally cheese and some sort of protein (or a mixture of vegetables) are added. The traditional Quiche Lorraine uses a Swiss-style cheese (grated very fine), thinly sliced ham and some grated nutmeg and finely ground white pepper.
Source: Author SBH 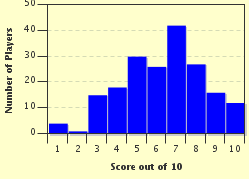 Related Quizzes
1. How to Cook Like Heston: Chicken Average
2. Baking the Grade Easier
3. Grandma tries to teach Swimgirl how to cook! Easier
4. Ladles and Jellyspoons Average
5. Let's Bake Our Way Across the US! Easier
6. Know your Sauce? Average
7. More Than a Filling Easier
8. I'll Have Mine Over Easy Easier
9. Doing It the Healthy Way! Average
10. What am I cooking? Easier
11. Can You Bake A Cherry Pie? Average
12. Foods that Take a Beating Average


Other Destinations
Explore Other Quizzes by SBH